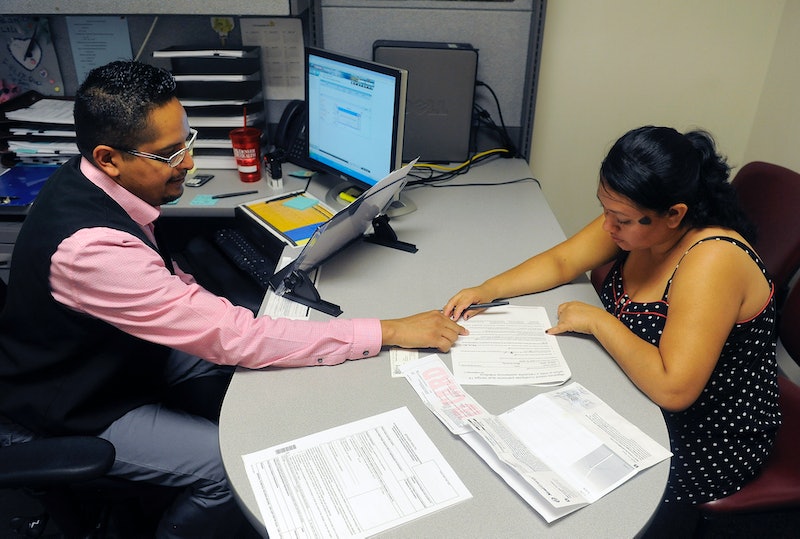 To say that Obamacare kicked off without a hitch would probably be an overstatement. On the Obamacare Exchange's first day live, many Americans had trouble even accessing the websites associated with the new insurance options. The launch of the Affordable Care Act involved encouraging Americans across the country to log on to their computers and peruse health insurance options available in their state. But for many that didn't happen. The flood of activity crippled many of the related insurance websites, while glitches to some sites hindered access to important information.

HealthCare.gov, the federal website serving more than 30 states was overrun with curious browsers, resulting in an error message that froze applications for those attempting to choose healthcare options. Problems related to security questions on user accounts also kept cropping up, preventing enrollment for many.

Health and Human Services Secretary Kathleen Sebelius acknowledged the opening day problems but likened them to troubles experienced with products created by technology giant Apple. “Everyone just assumes, there’s a problem, they’ll fix it, let’s move on...Hopefully, they’ll give us the same slack as they give Apple,” she said.

In its first day, over 2.8 million people visited HealthCare.gov to check out new options available under the Affordable Care Act, according to Medicare administrator Marilyn Tavenner.

While broader numbers for first-day enrollment were not released, a few states published their own estimates of how many residents successfully adopted new health coverage under Obamacare. In Kentucky, more than 1,000 had filled out applications by the close of business on Tuesday. For Connecticut, that number was around 167. In the nation's capital, around 175 people started the process towards enrollment.

So what happens now? Well, according to officials, the performance of the websites should get better, allowing people speedier and less frustrating experiences. As far as HealthCare.gov — the go-to site for the majority of states — some of the glitches users saw yesterday should already be fixed. "We certainly had a high volume creating accounts...We added capacity and we made some adjustments," Tavenner said.

More like this
Here’s How To Find Your Apple Music Replay For 2022
By Melanie Mignucci
Here’s How To Turn On Instagram Post Notifications
By Megan Grant and Alexis Morillo
How Does The Hinge Algorithm Work? An Insider Explains
By Lexi Inks
Here’s How To Make The Spotify Music Festival Lineups Taking Over Instagram
By Alexis Morillo
Get Even More From Bustle — Sign Up For The Newsletter