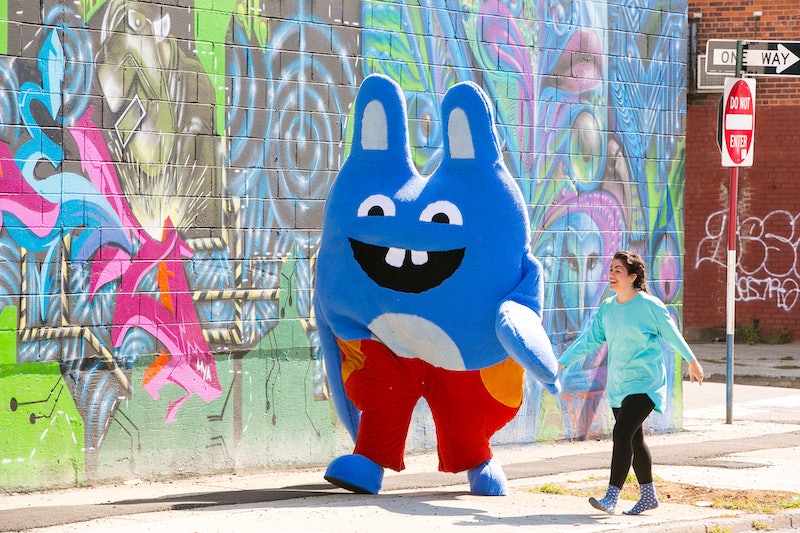 Easily one of the funniest shows on television, Broad City 's Wednesday night episode "Wisdom Teeth" follows Abbi's journey around the streets of Brooklyn while high on both vicodin and weed. Wait, Abbi would never mix too many pills with weed would she? You are correct, she absolutely wouldn't, but of course her BFF/designated caretaker after the operation Ilana would. To be fair, it was kind of an accident. Both Ilana and her roommate Jaime accidentally gave Abbi two doses of Vicodin and then Ilana made Abbi a "firecracker shake" that looked totally delicious, aside from the weed of course. Nevertheless, this sent Abbi into one of the funniest drug trips in recent years which made me realize that the drug trip storyline has been done quite a few times. But how does Abbi's compare with the others?

Abbi's drug trip features her talking to a life-sized blue stuffed animal named Bingo Bronson and taking a trip to Whole Foods to allow Bingo Bronson to talk Abbi into buying literally everything in the entire store, including and especially some very expensive Manuka honey. Ilana must ride her bike around Brooklyn looking for her best friend, following her and tracking her in a rather impressive manner. But is Abbi's trip as great as her predecessors?

One of my favorite drug trip story lines from recent years has to be Shoshana's accidental cocaine use in the Girls Season 1 episode "Welcome To Bushwick (aka The Crackcident)." Shoshana doesn't realize that the glass cigarette she used to smoke was not for weed but was actually for crack which leads to Ray somehow getting sucked into babysitting Shoshana and then chasing her up and down the streets of Bushwick as she goes through a crazy crack trip.

The result is Shoshana talking even faster than she normally does (somehow) and taking initiative about the weirdest things. I kind of wish this entire episode could have spent more time on her than the other titular girls. Sorry, girls.

Then of course there's Roger Sterling's LSD trip with his former wife Jane on Mad Men. The two ingest some acid-lased sugar cubes during a dinner party with Jane's friends and the hostess says to the couple that the effects of LSD are “like a boat trip. You have to cast off without worrying about sinking.” The trip itself is at once beautiful, crazy, and entertaining. But the reveal at the end of the trip is that sadly their marriage is ending. Who knew that a drama series could do a drug trip with serious results that didn't end in dangerous consequences, yet could still pack an emotional punch?

And of course there's the acid trip by Charlie and Frank in It's Always Sunny in Philadelphia when the best friend pair goes tailgating during open tryouts for the Philadelphia Eagles. Frank takes some LSD and then secretly puts some in Charlie's beer and the two go on a strange trip which includes Charlie whipping out his Green Man costume and other strange shenanigans. To be honest, the episode isn't nearly as weird as some of the others where the gang is sober. Well, soberish.

Homer Goes On A Hot Pepper Trip on The Simpsons

During a chili cook-off, Homer ingests some Guatemalan hot peppers and the resulting trip is easily some of the funniest and weirdest scenes from The Simpsons' long TV history. Watching Homer turn into a liquid and break the sun are priceless moments of television. And it gives me a whole new take on jalapeno-eating contests.

Liz Lemon Gets Loopy on 30 Rock

This may not be one of the very best episode of 30 Rock, but that comparison is kind of unfair considering how incredible the show was throughout its seven-season run. During the 100th episode, aptly titled "100," the building has a gas leak that goes unfixed for a long time thanks to a sketchy building maintenance man played by Michael Keaton. The resulting gas leak leads everyone to act totally crazy including Liz seeing a little blue friend played by Rachel Dratch (naturally), and Jack seeing his past and future selves. Technically a gas leak trip isn't exactly the same as ingesting acid, but the results are pretty damn similar.

Abbi's trip definitely belongs among these other comedic greats.