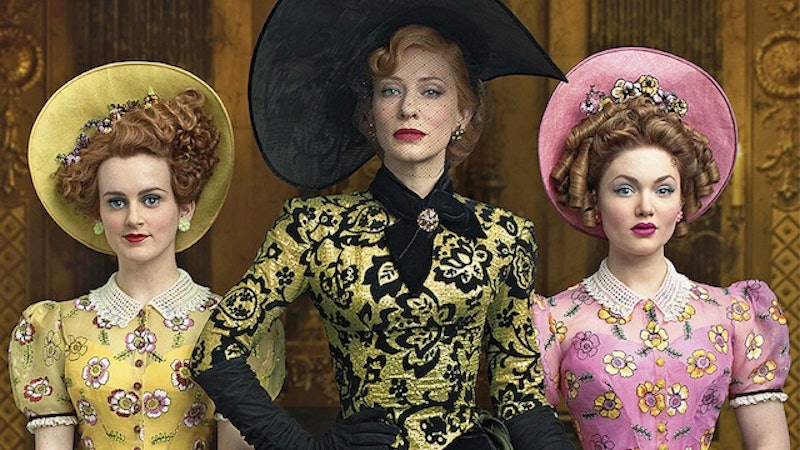 The Cinderella story as we know it now is largely the product of the simpering 1950 animated Disney film: companionable mice, a fairy godmother who doesn't question her only ward's decision to go to a strange party solo, and an incredibly tiny-footed heroine, so miniature in the tootsies I've always doubted her ability to stand. The Cinderella story is so enduring that it's even been remade as a live-action version with Cate Blanchett as the evil stepmother, out this March. But, frankly, the filmmakers are missing a trick: if they wanted to seriously pull in theatre goers with a tale of gore, inexplicably helpful foliage, far too many lentils and bird-armies, they should have gone back to the fairytale's original source — mainly, the Brothers Grimm.

See, in English, Cinderella has two written parents: Charles Perrault's Cendrillon, published in 1697 in his Tales Of Mother Goose (yes, Mother Goose was a dude), and the Grimm Brothers' Aschenputtel, which came out in their fairytale compendium of 1812. It's a popular story across many cultures, with China's own Yeh-Shen folktale, for instance, replacing the fairy godmother with a fish. One academic's managed to track down 345 versions of the story, written down and spoken. As a species, it seems, we really like good girls going to balls in disguise.

Perrault's French version was the first, and the closest to what we know. It features the pumpkin, the godmother, and the glass slipper, and is credited by Disney as their inspiration for the film. But the Grimms read Perrault, added the twists of their own Germanic oral tradition, and came up with an equally weird, if more gruesome, version.

Here are the best and strangest bits of the Grimm Brothers' Cinderella.

1. Cinderella is exactly the opposite of helpless.

Aschenputtel (remember, that's Cinderella's name in their version) doesn't mope about. She sorts everything out herself, and considering that her pragmatism involves a magic tree, some enchanted birds, and the apparent ability to disappear, it seems that she isn't actually an emotionally neglected kitchen maid, but a talented witch.

2. She is also seriously good at hiding.

The Grimm Brothers' prince insists on accompanying his newfound love home, to see who the hell she is. (Twice, mind you, since there are actually three balls in the original story.) Aschenputtel has to hide in a pigeon coop and up a pear tree until he goes away. And she isn't found. Good work.

3. The 'fairy' godmother is really just a tree growing on her dead mother's grave.

The godmother's not a fairy, or even a person. In Aschenputtel's version, Cinderella's father asks what he can get her on a business trip, and she asks for a simple twig (the stepsisters ask for gold and pearls, because they're not maudlin hippies). She then plants it on her mother's grave and waters it with her tears. Said tree grows up to give her whatever she wants: the dresses are just the latest incarnation. Aschenputtel is clearly powerful as hell, so why she wants to marry some dude who chases her into a pigeon coop is beyond me.

4. The stepmother has a peculiar obsession with lentils.

Aschenputtel's stepmother throws first one, then two cups of lentils into the ash and tells Aschenputtel that if she can pull them all out, she can come to the ball. Aschenputtel manages it, which I will explain momentarily, but I still don't know why she didn't ask the tree to throw down a sword and just chase the lentil-hater around the garden.

5. "Fit into the shoe" actually means "cut off bits of your feet."

None of this wimpy "my foot doesn't fit" stuff for the Grimms. To fit her into the tiny golden slipper, one of her sisters cuts off her big toe, the other a bit of her heel. Their plans are foiled by the blood everywhere (which surely somebody must have thought about), but hey, points for trying.

6. Cinderella has some seriously badass birds as minions.

The birds are basically Aschenputtel's soldiers: they pluck all of her lentils out of the ashes, eating the bad ones and putting all the good ones in the pot. But they're not cheery little singing friends.

When her stepsisters cut off their body parts to fit into the slipper, the birds tell on them, by twice singing a peppy song to the prince about how the slipper of his stepsister-bride is filling with blood. And then, once they've guaranteed their witchy mistress's ascension to the throne via marriage, they find the stepsisters in the church and peck out their eyes. (More on that in a moment.)

7. The father has a strong destructive streak.

Aschenputtel's dad's not dead, as he was in the Disney film; instead he's still around and being a nuisance. When the prince turns up at his door, not once but twice, with a story about a girl hiding in various bits of his property, he doesn't call the police — he, wondering if the girl could be Aschenputtel, gets an axe and chops whatever it is down. Pigeon coop? Smashed. Beautiful pear tree filled with fruit? Kindling.

Let me remind you that he does this while thinking his daughter might be inside. She should have got her birds to make her a boat and floated the hell away from that madhouse.

8. The prince is a predator with a mysterious-princess-trap.

I have to give Aschenputtel's prince credit for at least having a personality. Admittedly he does chase her into chicken coops, but he also, after the third ball, he lays a trap: he smears the palace steps with pitch so that she leaves her golden shoe behind. Smart man. (Though he then fails to notice said shoe filling with blood until some magic birds tell him.)

9. The stepsisters end up getting horribly blinded.

The Grimm stepsisters are truly awful, and get a truly awful comeuppance. You know how I said they were blinded? Here's how that goes down: they want so badly to get the reflected glory of Aschenputtel's royal wedding that they accompany her up the aisle, at which the birds peck one eye out. But they still want it so badly that they accompany her back down the aisle, and the birds promptly peck out the other eye. Respect.