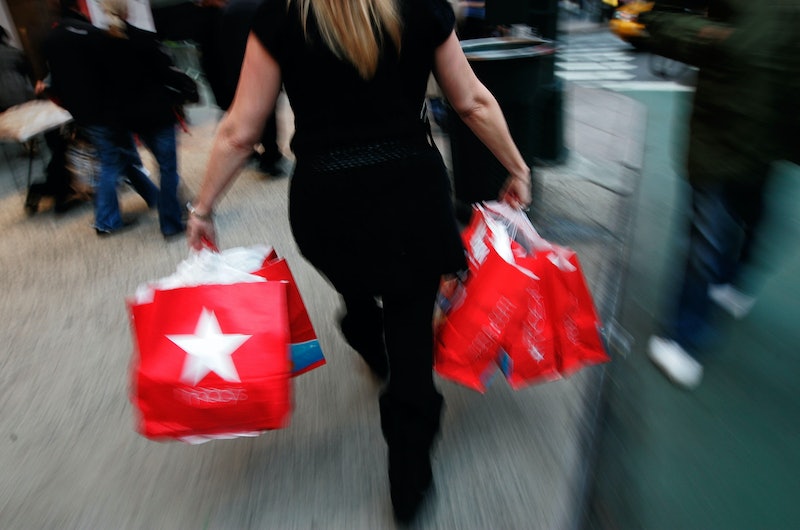 Retail therapy is real, everyone. According to a researchers from Michigan State University, people who experience post-traumatic stress coped with their feelings by buying new things.

"When the going gets tough, the materialistic go shopping," said Ayalla Ruvio, the professor who led the two-part study.

The first part of the study tested two different groups — an Israeli community living near the Gaza Strip during a six month period of constant rocket attacks and a town far from the fighting. Each community was given a questionnaire which asked some of the following questions: "Did you experience post-traumatic symptoms such as nightmares or memory loss? Did you cope with negative feelings by buying things? How often did you return from a shopping trip with items you hadn't meant to purchase?"

The questionnaire found that the most materialistic individuals experienced the most amount of post-traumatic stress and as a result, bought more things.

Researchers explored the psychological state and spending habits of 855 U.S. consumers in the second part of the study. They surveyed the interests of these individuals, asking them how often they thought about dying. Similarly to the first part of their study, researchers found a strong relationship between fear of death and impulse to shop.

Unfortunately, while shopping in the moment may bring happiness to those experiencing stress, it's often temporary and can be detrimental in the long run. Those who turn to buying new thing as a means of coping with their fear of the death may never truly deal with their real issues. Impulse shopping gives the individual a false sense of permanence in the world due to the fact that possess more objects.

More like this
42 Black Owned Fashion & Beauty Brands To Support Today & Always
By Mekita Rivas, Shea Simmons, Kui Mwai and Dominique Norman
The 9 Best Vagina Hygiene Products, According To ShowerTok
By Carolyn Steber
John Legend's Loved01 Skin Care Line Is All About Accessibility
By Carolyn Steber
An Honest Review Of BeautyTok's Beloved Sleepy Tie Hair Tool
By Rebecca Strong
Get Even More From Bustle — Sign Up For The Newsletter
From hair trends to relationship advice, our daily newsletter has everything you need to sound like a person who’s on TikTok, even if you aren’t.