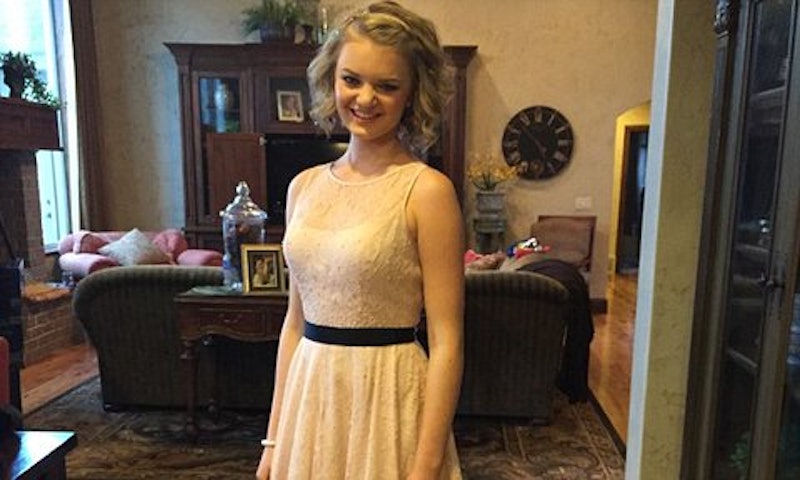 Lone Peak High School in Highland, Utah has a very strict dress code for formal school events. According to the Daily Herald, some of the stern policies include that dresses and skirts must be knee-length, and straps must be at least 2 inches wide. Although one student strived to abide by these extreme rules, she apparently still fell short of the school's unreasonably high expectations. Gabi Finlayson, a student, was told to cover up her exposed shoulders because they were "inappropriate." Ugh, not this sexist behavior again.

Although Gabi reported she felt embarrassed when approached by a faculty member and told to put on a shawl, she obliged because she didn't want to cause a scene or be further reprimanded. Still, Finlayson remained angry and felt the school was shaming her body. "Somehow my shoulders are sexualized. Like it's my responsibility to make sure the boys’ thoughts are not unclean.” she told KUTV. Is this really the message we want to be sending to young adolescent girls at possibly the most crucially developmental years of their lives? I think not.

The supposedly "inappropriate" dress broke a school rule that states "all tops must have sleeves that cover the shoulders and underarms." Even though Finlayson's dress had thick straps, a high neckline, and was past the knee, it was still deemed unsuitable.

What this school doesn't realize is that it's crushing the individuality and creative expression of their students, which they are rightfully entitled to, with these extreme rules. Body shaming, even in this less traditional form, only further damages the confidence and self-image of young women.