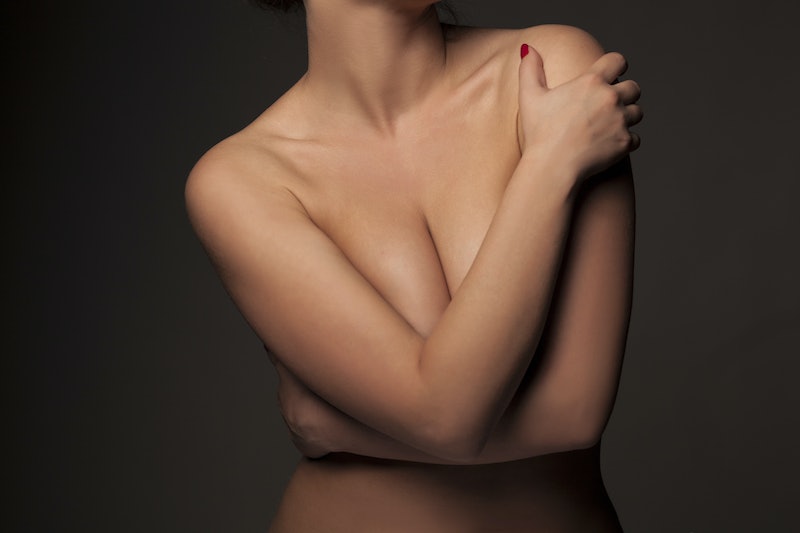 Recently, I came across a Chicago Tribune article headlined, "Chicago defends law against going topless." To be entirely honest, I wasn't actually aware that Chicago had a law regulating who can and can't be topless in public, but as both a resident and an owner of a pair of (small, but whatevs) breasts, I was intrigued.

"The city on Wednesday filed a motion to dismiss a federal lawsuit over the right of women to go topless in Chicago, arguing that nudity is not protected expression under the Constitution and that 'female breasts are considered erogenous in a way that male breasts are not.'"

Wait, what? "Female breasts are considered erogenous in a way that male breasts are not?" That's just taking society's seeming need to sexualize all things breast-related to a whole new level. Rather than saying, "Hey, everyone, maybe we should re-evaluate this whole 'bewbz = sex' viewpoint," society just placed blame on breasts for being too damn sexy. This is the local government version of a creepy bro that says, "Tell your breasts to stop looking at my eyes."

Anyway, there are already dozens of articles — or, just visit take a stroll past Miley Cyrus’ Instagram — sprinkled throughout the internet devoted to how ridiculous it is that society sexualizes breasts. I won't bore anyone by rehashing those points. For me, I’ve got a bit of a personal stake in the whole matter: My breasts weren't always the male gaze-tempting, illegal appendages they are today. There was a time when my breasts were allowed to exist in a non-sexualized way under the law.

Reading the statement over and over again, female breasts are considered erogenous in a way that male breasts are not, I traveled down somewhat of an existential wormhole. See, for those of you who might not know, I'm a transgender woman. It wasn't until I was 26 years old that I began any sort of hormone replacement therapy regimen, and not for another 9-ish months until I had anything even somewhat resembling legit boobage.

Until I was 26, I looked like this, and I could have legally gone wherever I wanted topless without so much as raising an eyebrow.

Now, before someone sends me an email saying something like, "It's the cost of being a woman" or some sexist garbage like that, just... don't. I'm asking, for a completely rational, logical standpoint, how is it that the same part of the same body can go from being benign to pearl-clutchingly offensive simply because the context (i.e., the rest of my body and its changing appearance) shifted? Is it because my breasts are larger than they used to be? Well, no, that logic doesn't hold up; lots of dudes have pretty massive man-titties and their toplessness is still infinitely more permissible than that of even the most meager-breasted woman. So it's not a size thing.

When you've gone over all the possible defenses for such a double standard in institutionalized views of people's bodies, there's no getting around it: Women are seen as inherently sexual objects, whereas men are granted the right to exist in all sorts of states, only being seen as sexual at times when they actually choose to be. Therefore, their bodies are not considered lewd when not engaging in a sex act. Women, by the mere act of existing, are perpetually, permanently, non-consensually engaging in a sex act, and are therefore, considered lewd.

So when I started becoming outwardly identifiable by the world-at-large as a woman, my breasts went from "NBD" to "OMG PUT THOSE THINGS AWAY, THINK OF THE CHILDREN!" What a shit show all of this is.

In 2013, a transgender woman named Ashley Del Valle was arrested in Savannah, Georgia, for allegedly exposing her breasts. Like my sweet home Chicago, it's illegal for women to show their breasts in public in Savannah. Then something magical happened, something that can only happen when transphobia and misogyny combine: Del Valle was placed in a men's cell because the prison determined that she was "technically a male," based on what I'm sure was a wonderfully invasive genital examination.

So hold up: If she's "technically a male," then she didn't commit any crime at all, right? Either she should have been free to bound through the streets braless without consequence, or she should have been placed in a women's prison, but certainly not arrested for illegal toplessness as a women and placed in a men's facility... right? Eh, apparently not. Logic be damned, Del Valle was tossed in with men before eventually being locked in solitary confinement "for her own safety."

This is an honest-to-God breast-based paradox, and one of the most clear-cut illustrations as to why laws like these are ridiculous. Being the curious creature that I am, I decided to find the ordinance being discussed in that Tribune article to see exactly how it’s worded. Here it is:

Any person who shall appear, bathe, sunbathe, walk or be in any public park, playground, beach or the waters adjacent thereto, or any school facility and the area adjacent thereto, or any municipal building and the areas adjacent thereto, or any public way within the City of Chicago in such a manner that the genitals, vulva, pubis, pubic hair, buttocks, perineum, anus, anal region, or pubic hair region of any person, or any portion of the breast at or below the upper edge of the areola thereof of any female person, is exposed to public view or is not covered by an opaque covering, shall be fined not less than $100.00 nor more than $500.00 for each offense.

Now, call me a prude, but there are parts of this ordinance I can actually get behind. I mean, from a personal standpoint, I'd be more than happy to never see a complete stranger's genitals, vulva, perineum, or anus, as I'm walking through Grant Park. That's a request I think most people could agree to. What piques my curiosity is the question of how on earth “any portion of the breast at or below the upper edge of the areola thereof of any female person” wind up on par with someone straight up showing you their asshole?

A Chicagoan dressed in ordinance-approved garb

Every year, news outlets will unearth ridiculous, archaic local laws that are (almost always) unenforced, yet somehow remain on the books, mostly because no one ever cared enough to get around to formally doing away with them. For example, it’s illegal to wear a bulletproof vest whilst committing a murder in New Jersey. It’s also illegal to wave a torch in Wisconsin. And it's super cute to have these little legal vestiges of the past hanging around for some light comedy. The Government: They can make jokes too! So maybe that's what's happening with the city of Chicago defending its right to ban nipples, sideboob, and underboob (the two best parts of the boob, in my opinion) in public — maybe they're just being funny by telling women that their bodies are inescapably sexualized and offensive! (That's not what's happening.)

Jennifer Lawrence, wearing something that could get her arrested in Chicago

As much as we've long since known that topless equality is a painfully obvious, necessary step towards the government getting on-board with a healthy, gender-equal body image position, the whole issue is cast in an even more illogical light when you consider how transgender women's bodies are treated under these laws. Basically, everyone needs to ease up, #FreeTheNipple, or at very least, let me know when my chest became illegal.

More like this
How To Fight For Reproductive Rights, Based On How Much Time You Have
By Courtney Young
The Music Industry Continues To Fail Black Women
By Precious Adesina
Yomi Adegoke On The Offline Diaries & The Power Of Representation
By Jessica Morgan
23 Abortion Funds In States With Trigger Bans To Donate To
By Emma Carey
Get Even More From Bustle — Sign Up For The Newsletter