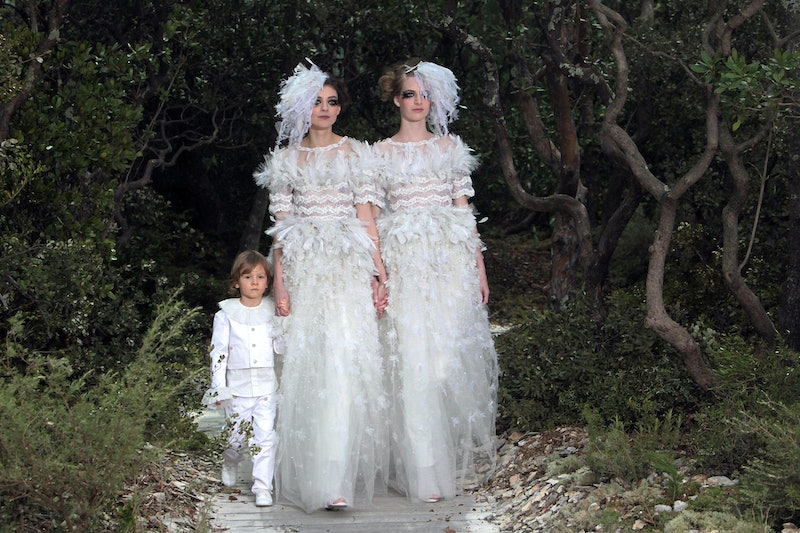 Some experiences are so incredibly rich with cultural significance that enjoying them even occasionally seems decadent. Case in point, Paris Couture Fashion Week comes but twice a year, making the whirlwind experience all the more compelling. More is more when it comes to couture — with the exception of pieces so minimalist they may not even count as clothing. Evening gowns blossom into multi-tiered confections worthy of a place at the Metropolitan Museum of Art, hats so voluminous they obscure the face rule the runways, and the latest crop of newly minted top models are allowed the chance to demonstrate their signature stride. This is to say nothing of how the week influences the season's trending wares and street style.

With the advent of Twitter and Instagram, bloggers from Blair Eadie to Garance Dore are influencing the world's sartorial preferences minute by minute. Given the intensity of Couture Fashion Week and its breakneck speed, attendees and armchair fashion critics rarely have the chance to properly mull over the experience — especially when the week comes in the wake of the unthinkable attack on Paris's Charlie Hebdo. In honor of the Fashion Week to beat all Fashion Weeks and the City Of Lights itself, here are 19 questions Paris Couture Fashion Week left us with.

1. Did Kendall Jenner embrace the Free The Nipple movement on the Chanel runway?

2. And a follow-up question... can someone get me the number of an Eternal Sunshine of the Spotless Mind-type surgeon to remove the image from my memory?

3. Are lollipop hats in vogue this year? If designer Antonio Ortega says so, the rumors must be true...

4. Does the hand-embroidered poetry clothing at Valentino make it acceptable for me to sew phrases from my high school literary magazine onto my clothes?

5. Has Kristen Stewart finally moved beyond her recluse phase to let her quirky flag fly? Her edgy new look certainly suggests a change.

6. Is hypnosis in for Spring 2015? Because I'm already dizzy after peering at the rainbow stripes at Dior and collage-like works of art at Chanel.

7. Is the wedding dress the new LBD? I blame Jean Paul Gaultier's unearthly white showstoppers for the confusion.

8. How much for Elie Saab's closing number gown? I'm actually asking. That gown is a dream wrapped in a reverie swathed in hand-embroidery.

9. What's the deal with the hats, Chanel? I apologize for my lack of vision, but frayed straw wrapped in black chiffon does not a signature look make.

10. While we're on the subject of Chanel, what on earth did the show's models do to train for a show which highlights the belly button, torso, and hips? Whatever Zumba or SoulCycle class they took, I need to be on the waitlist immediately.

11. How utterly precious was the adolescent girl who opened the Laurence Xu show? Admittedly, this is a rhetorical question, but she deserves her 15 minutes of fame.

13. In what world is an admittedly beautiful but highly risqué corset paired with lace-embellished stay-ups considered real clothing?

14. Did Donatella Versace suddenly discover an all-abiding love for the United States? I haven't seen so much red, white, and blue in one place since last Fourth of July.

15. What was with the lovely but dangerous swiss dotted fascinators at Giambattista Valli's show? I found myself fearing for the be-heeled models on their long walk down the runway.

16. Did the public's boredom with Dior's simplicity finally get to designer Raf Simmons? It seems there are only so many comments about a gown's blandness a designer can take before he floods the runway with eye-popping patterns and neon brights.

17. Did the pin dress at Schiaparelli make anyone else cringe?

18. Is Viktor & Rolf's bizarre collection meant to be amusing or confusing? The only conclusion I can draw is that fashioning wheat stems into camouflage is in for spring, but only when worn with a '50s-esque window curtain repurposed into a dress. Perhaps this is the next phase of eco-couture, but for the sake of fashion I hope not.

19. What on earth was the tubular funnel entity on the ILJA runway meant to be? And how did the gravity-defying creation stay up?

Fashion is so effing bizzare.