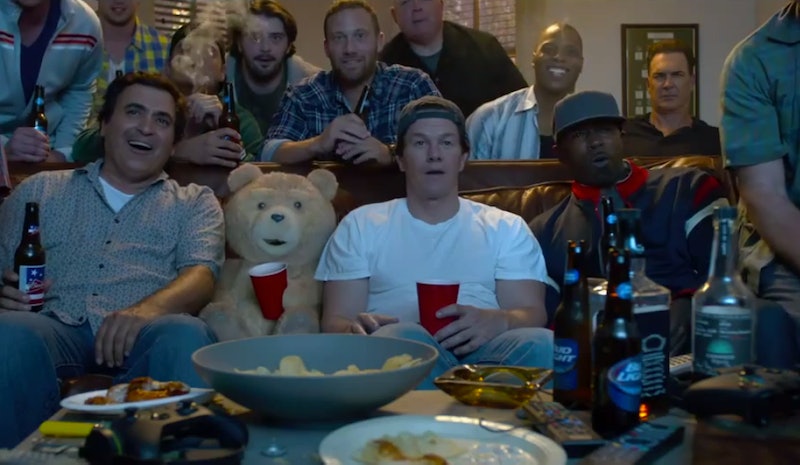 Breaking news: The concept of a grown-ass man with a best friend who is a literal (if anthropomorphized) Teddy Bear is no less weird in sequel form than it was the first time around. But alas, that doesn't mean it's going anywhere: the first trailer for Ted 2 has arrived. I should warn you now: at one point it involves Mark Wahlberg lolling in a small sea of semen. But really, what else did you expect from this raunchy comedy?

The second Ted film — this time featuring Amanda Seyfried — is following the anthropomorphized Teddy Bear on a.... Civil Rights journey? The sequel finds Ted wanting to have a baby with his human wife, but the powers that be won't let him do things like sign a birth certificate unless he can prove that he's human. And so we enter a delightfully absurd civil rights allegory that I'm really gonna try not to think too hard about, for the sake of my own sanity.

Ted 2 is happening, you guys, and, from the looks of this hilarious trailer, it's probably going to make so much money.

This movie hits theaters June 26, 2015, so you've got approximately five months to prepare yourself. Even if you yourself don't plan to see this movie, then you need to at least prepare yourself for this movie. It's coming. Pun intended. Check out the trailer below.

More like this
'The Crown' Season 6 Has Suspended Filming "Out Of Respect" For The Queen's Death
By Bustle Staff
Another Side Of Rupert Grint
By Maria Sherman
Owen Thiele Asked Sundance Attendees About Films That Don’t Exist
By Grace Wehniainen
Jennifer Coolidge Hunted For Jewels & Lashes In J.Lo’s Hotel Room
By Jake Viswanath
Get Even More From Bustle — Sign Up For The Newsletter
From hair trends to relationship advice, our daily newsletter has everything you need to sound like a person who’s on TikTok, even if you aren’t.