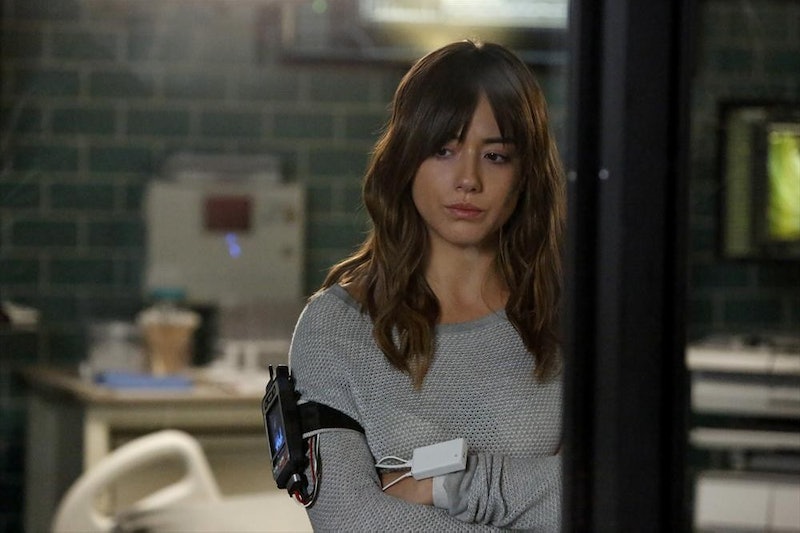 I'll take your SkyeWards, MayWards, and Skimmons, and raise you a Skoulson. Now, I may not pair Skye and Coulson romantically like I fervently, feverishly do with Fitz and Simmons, but there's no denying that they have one of the most compelling relationships on Agents of S.H.I.E.L.D. Because even with all of the explosions, guns, espionage (I'm looking at you, Mack and Bobbi), creepy people without eyes, and (multiple) supernatural transformations, Agents of S.H.I.E.L.D is a character-driven show at its core — it is a Whedon-produced creation, after all. Coulson and Skye's father/daughter-like rapport has long been one of the pillar-relationships. That said, could they be headed for the rocks when Season 2 (finally) returns in March?

There's no denying the fact that Agents of S.H.I.E.L.D will be going through some huge upheavals in the second half of Season 2 — the Inhumans story arc is sure to shake things up in a major way, and Nick Blood (aka Lance Hunter) also hinted in a recent interview with Zap2it that Bobbi's secret (whatever that may be) is going to have a big impact as well. In that same Zap2it article, Clark Gregg talked of the ramifications of the show's — and Skye's — new DNA, hinting that there might soon be trouble in... well, not quite paradise, but one of the show's more stable friendships.

[Coulson's] no. 1 job is to be responsible for SHIELD, which he views as being responsible for the safety of billions of people from things they don't know about. That's what SHIELD is. No matter how much he loves Skye -- and it's as much as you can love somebody -- it's the closest thing to a daughter he has. That's a sacred trust.

Uh oh — so Coulson might be forced to choose S.H.I.E.L.D. over Skye at some point? Gregg, for one, hopes this won't be the case — he added, "I hope he doesn't get put in that situation [where she is a threat] because it would mess him up." Come on, hasn't Coulson been through enough? Let's not put him through the pain that a Skye-betrayal would surely cause.

Add all that in with all we can possibly garner/glean from the newly released trailer (especially the fact that Skye's locked in a room with "Danger" written on the wall), and things are definitively not looking good for the two of them when Agents of S.H.I.E.L.D. Season 2B premieres.