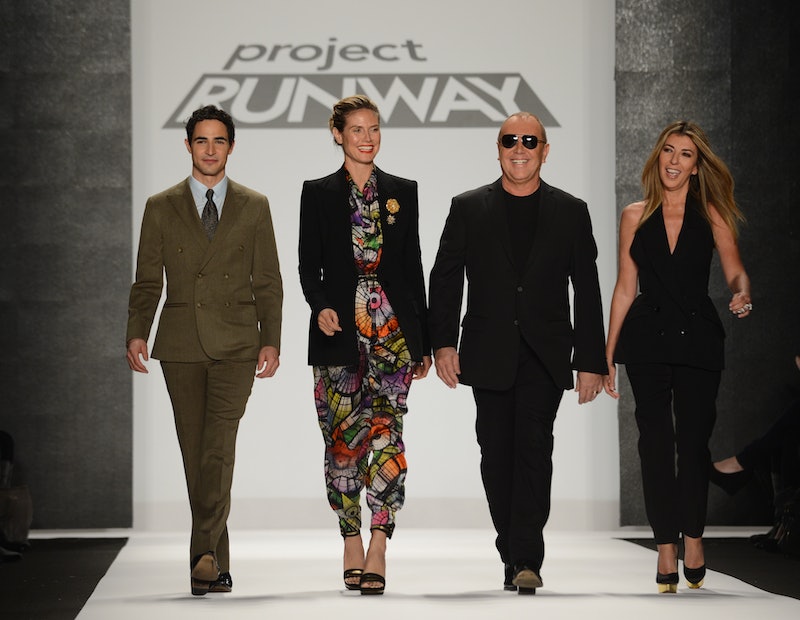 It's a little pathetic to be nostalgic for a reality TV show that aired only 10 years ago, but rewatching Project Runway 's pilot is enough to make me realize that since then, the show has changed so much that it kinda feels like a parody of itself. And to think that the Bravo period of the show was only five seasons long, and has long been outpaced by the Lifetime years? That's a long time without the original panel of judges, decoy collections that mean almost half of the cast gets to show in the finale.

One thing that hasn't changed whatsoever — the cringeworthy product placement. Those Banana Republic accessories are just as heinous as the Piperlime ones, though I do appreciate that the time isn't really spent on them, a simple voiceover from Heidi is all we get.

I've seen this show a thousand times, and while the first season isn't what I could consider the best — I'd hand that title to Season 3, with it's final foursome of Michael, Laura, Uli, and Jeffrey, whose diverse personal styles resulted in the best Fashion Week show — it certainly established all the show's conventions pretty early on. But while there are a lot of familiar things like Tim Gunn and that sad credit music, a lot of questions will arise if you're watching the pilot for the first time in a while:

How Am I Watching This?

You have to be a pretty big PR fan (or know someone who is) to watch the Bravo years. They used to be available on iTunes and rerun constantly. I know I wasted many a vacation sitting in a hotel room binge-watching this season. But since the Lifetime switch in 2009, it's almost impossible to find Seasons 1 through 5 unless they've been saved on your TiVo for five years, you have it on DVD, or you've had them on your iPod Touch since high school.

That's kind of a trick question, because it's still Heidi Klum. She's been with the show since the very first episode, but if she hadn't already been an international modeling star when the show premiered, she'd be totally unrecognizable. She's much less confident in sharing her opinions on the designs, even though she was just as charming then as she is now.

Wait, What Network Is This On Again?!

This was the Bravo version of the show, which any fan will tell you was not just the beginning of reality's takeover of American television, but also the perfect bridge from the channel that used to show operas to the home of the Housewives.

How Did They Get a Cast This Amazing?!

Austin Scarlett's iconic corn husk dress, still one of the best challenge garments in the show's history, was in the very first episode. Daniel Franco, who had the distinction of being the very first contestant eliminated, made a trash bag couture dress that could have netted him a challenge win in the last few seasons.

Where Are All The Last Minute Tricks?

Keep looking, because besides a few "unconventional materials" challenges (like the pilot's "make a dress out of Gristedes groceries" surprise) and team challenges, there are shockingly few last minute twists designed only for the audience.

What's Up With the Models?

Oh yeah, the models used to be a part of the actual competition... they would book other jobs last minute, lie about their measurements, or show up a half-hour late like Kara's model does in the premiere and Jay's does halfway through the season. Just another challenge for the designers, who mostly were able to take it in stride.

In the very first episode, they already have all of the show's greatest catchphrases down pat. Tim Gunn proved he would be the show's breakout favorite by haughtily announcing "you have to make it work" to the room of sleep-deprived designers trying to sew tablecloths and aluminum foil together. Heidi says "Auf Wiedersehen" to the departing designer, but, crucially, goes for a handshake instead of the double kiss. We do have to wait for about halfway through the season for Michael Kors to start constructing his trademark pithy comments about disco vaginas and grandma hookers, but Nina Garcia's slow nod is in place from the first time she sees a look she approves of.

Bonus Question: Is the Finale Really As Amazing As I Remember?

Oh, it's even better. On rewatch, all the drama with Wendy or whatever turns into pure comedy and you can see just how great the collections were. Jay's collection recalls trends that wouldn't pop up until 2010, and his color blocking is reminiscent of Fashion Week street style from six months ago. And Kara Saun's strong runner up, inspired by Amelia Earhart aviatrixes, might be a little costumey, but it's impeccably made and full of complex pieces like jackets and leather pants.

The show used to be an example of how reality TV can provide a glimpse behind the scenes of a profession that affects all of us. But as the show's gone on, it's easy to forget how innovative Project Runway was in Season 1.