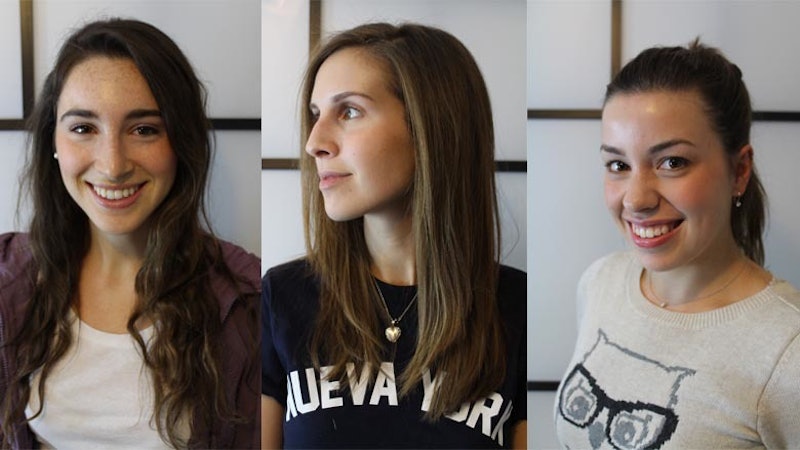 Each and every morning, I follow the same routine: Moisturizer, BB cream, concealer, bronzer, blush, mascara. I usually use the same products, in the same order, and with the same technique. I love the way that makeup makes me feel, but have been told on countless occasions that my love of makeup means I don't love myself. Pretty sure that's a bunch of BS, but I see where people are coming from.

It is obvious that women today face an immense amount of societal pressure regarding appearance. Magazines, television, and movies all show us one version of beauty: size zero, glossy hair, and a face full of makeup. These unrealistic expectations are only perpetuated by a culture that is inundated with selfies, spontaneous photo sessions, and cameras on every device imaginable. We are expected to look our best, or better than our best, at all times.

However, I really don't think my love for makeup comes from a cloud of self-doubt that hangs over my head, a lack of self-worth, or even low self-esteem. Sure, I’m a fan of makeup for all the vain reasons. It brings color to my cheeks, hides any blemishes, and elongates my lashes. It smooths my skin, highlights my cheekbones, and plumps my lips. However, I also just appreciate the ritual of applying makeup in the morning. It relaxes me, and it's really, really fun.

Anyway, even if it does stem from societal impact, makeup can have an enhancing effect on women’s self-confidence, whether real or imagined, and shouldn’t that count for something?

This got me thinking: Does makeup make women feel better about themselves because it covers all of their imperfections and flaws or is it simply the act of putting it on? Could makeup really have a placebo effect on its users?

I convinced three friends to take part in my social experiment and hired an amazing makeup artist to trick them into thinking they were applying makeup, when really they were just going through the motions.

First, the ladies were asked to fill out a questionnaire with questions like:

How long does it take you to do your makeup?

How old were you when you first started wearing makeup?

How much are you willing to spend on professional makeup services?

The most important question that the ladies had to answer was:

Which products do you use on a daily basis?

After their makeup was completed, the participants were asked to fill out another questionnaire, this one asking them if they had felt a confidence boost from their makeup application and if they felt better than when they had come in with their own makeup on.

Two of the three ladies claimed that they didn’t feel more or less beautiful with this amount of makeup on, which was interesting considering they were wearing significantly less makeup than what they had stated they wore on a daily basis. This meant that the ladies felt just as beautiful, confident, happy with their reflection, what-have-you, with only a fraction of their daily makeup routines on their face. Both of these ladies were shocked to find out how little makeup they were actually wearing.

With a successful social experiment under my belt, I became even more curious about how makeup correlates to confidence so I created an online survey and sent it out into cyberspace. With 145 responses, the majority of women stated that on a scale from 1 to 10 — 10 being the most confident — their confidence level without makeup was a 6, with a level four being the second most popular answer. The same women said that with makeup their confidence level rose to a level 8 (30 percent), 9 (26 percent), and even 10 (23 percent). Sixty-eight percent of these women said that they wear makeup on a daily basis, 78 percent stated that they would not consider going sans makeup to an event, and 36 percent admitted to sometimes wearing makeup to the gym.

After reading the results, I have to admit that I wasn’t in any way shocked or surprised because I fall into the majority. I do feel most confident with makeup on, I most definitely would not attend an event without being dolled up, and I usually have makeup on while working out.

While natural beauty comes from within and no amount of lipstick can give a woman self-worth, even a bit of mascara can boost a woman’s self-confidence and that notion in itself is important. Makeup products obviously do work to cover skin imperfections; however, I think the idea of having makeup on may have an even greater impact than the makeup itself.