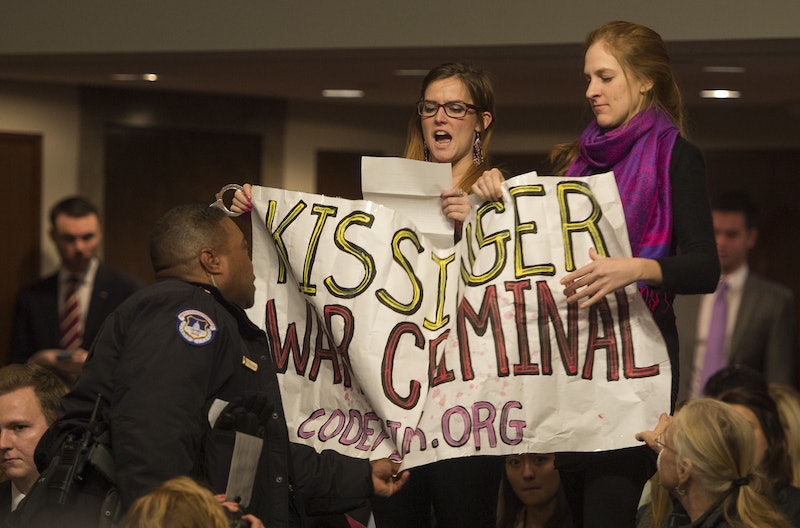 During a committee meeting that turned ugly Thursday, Sen. John McCain called Code Pink activists "low life scum." The showdown led the Arizona congressman to threaten activists with arrest after they got in former Secretary of State Henry Kissinger's face and called him a war criminal. While Code Pink's tactics, including interrupting government meetings, showing up at the houses of politicians, and heckling elected leaders, might be predictable and come off as disrespectful, to write them off as lowlifes is definitely uncalled for.

The organization is largely made up of women who are peace and environmental activists who walk their talk. Code Pink women are constantly getting arrested while protesting against issues that include torture, the drone program, women's rights, and calling for an end to war. McCain was having none of it on Thursday, though. He said during the hearing:

I've been a member of this committee for many years and I have never seen anything as disgraceful, and outrageous, and despicable as the last demonstration that just took place.

"You're going to have to shut up, or I'm going to have you arrested," he then said when a protester began to interrupt him. A few minutes later, he said, "Get out of here, you low-life scum."

Code Pink's abrasive way of protesting is purposely irritating and provocative, perhaps in hopes of grabbing headlines and thus drawing attention to their causes. Although their push to directly confront the 91-year-old Kissinger and interrupt the meeting might have angered McCain, it was disgraceful on McCain's part to refer to activists exercising their constitutional right to free speech as "low-life scum." He might not like their rash tactics, but they seek a better world and act on that motivation.

There are better ways to deal with disruptive protests. Compare how former anti-war activist Secretary of State John Kerry engaged the group in September when they disrupted a meeting about threats posed by the Islamic State. His tone was respectful and diplomatic. He said at that time:

Code Pink was started by a woman and women who were opposed to war but who also thought that the government's job was to take care of people, and to give them health care and education and good jobs. If that's what you believe in, and I believe it is, then you ought to care about fighting ISIL.

Code Pink's issue with Kissinger stems from his role in the cabinets of President Richard Nixon and President Gerald Ford during the Vietnam War era. He was key in orchestrating the horrifying coup de'tat that left democratically-elected Chilean socialist President Salvador Allende assassinated and rang in the bloody dictatorship of Augusto Pinochet. He was also involved in the infamous bombing of neutral Cambodia during the Vietnam War, which has been blamed for the rise of another bloody dictatorship, the Khmer Rouge, among other nightmarish foreign policy decisions.

Americans have the right to protest their elected leaders and government — in fact, because this is a democracy, we have the duty to. But Code Pink's tactics of showing up wearing — you guessed it — pink and yelling at people or thrusting themselves into the public eye by rushing a 91-year-old former secretary of state might be too same-old, same-old and predictably crass for some, raising questions about whether they are reaching their intended audience. But McCain might want to remind himself that he is a U.S. senator and should treat citizens, including activists that he disagrees with, as though he works for them, and not the other way around. To do otherwise would be, in his own words, disgraceful, outrageous, and despicable.