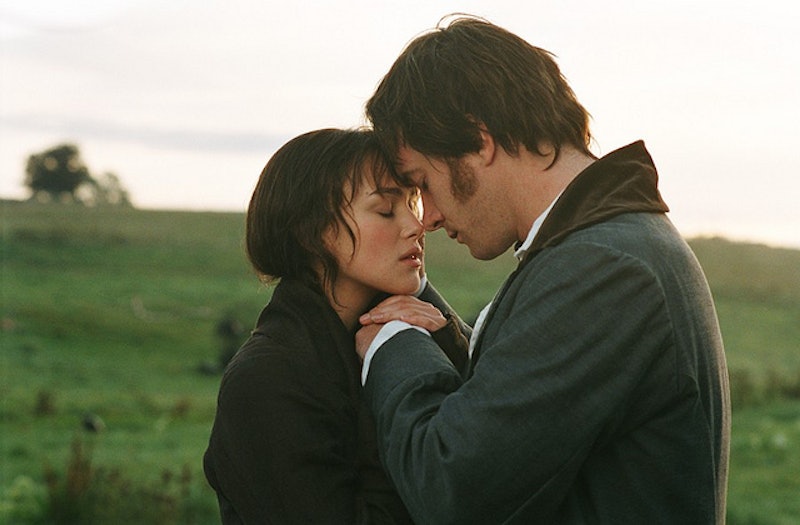 I probably don't need to tell you that the Internet is a weird and magical place that contains everything you want to find and even more things that you never want to see. For booknerds, especially those involved in various fandoms, this can be a wonderful thing. The interwebs are a treasure trove of fanfiction and art that continues right where your favorite story leaves off, and gives you even more to obsess over (as though that were really necessary). Fanfic is a great way to bring fans together and share ideas, and lets you become a part of the world of your favorite story. Good clean fun, right?

Of course not. Because this is the Internet. And the internet just can't help itself.

For every innocent story of Harry Potter and his friends going off on adventures, there are 10 involving Harry and Draco doing the dirty while Moaning Murtle watches. No one is safe online, and that includes your favorite characters.

And you know what? I think that's awesome. I fact, when I pitched this story, I specifically told my editor, "I want to go to some weird places on the Internet." And by God, I did. So while everyone else is reading gushy love poems and swooning over Jane Austen stories this Valentine's Day, let's you and I take a stroll through some less conventional love stories, courtesy of the world of smutty literary fanfiction. The stories below encompass some examples of the good, the bad, and the bizarre in the world of adult booknerd fanfic.

I wake up in the morning happy because I know that this exists. It's everything that I didn't know that I needed in my life. The Weasley twins encounter Lance Bass at a party and fight for his attention. Lance, that little minx, plays with both boys' affections until they all come to a brilliant conclusion: Why not all have some fun together? I don't know why I never thought of a Harry Potter/*NSYNC crossover universe, but this fanfic has convinced me that it makes perfect sense. A must-read for Harry Potter fans who never want to look at the Weasley twins the same way again.

My personal favorite line? "Fred would never in his life carry off the sexiness Lance generated merely by breathing. For one thing, Fred had red hair."

We Found Love in a Hopeless Era

Slash fiction about Nick and Gatsby? This one basically writes itself. Sure, it might not be quite as elegantly written as something Fitzgerald could produce, but Fitzgerald also never wrote about Gatsby and Daisy having sex while Nick watches, so take what you can get. The biggest issue is that the author never finished writing the story, so although we get the previously mentioned Daisy-Gatsby-Nick love scene, we never get any real Nick and Gatsby action. But don't worry, you're given more than enough buildup to imagine them doing the deed yourself (as though you haven't already thought about it, you naughty reader you).

I didn't add this because I think it's good, I added it because I desperately want someone to explain it to me. As far as I can tell, it's about a girl who teacher forces her to write a retelling about boring old Shakespeare. So, logically, she writes smut instead. The premise is promising and almost kind of meta, but the actual story is so horrifically bad that I suspect it might be a joke. Or, at least, I pray to God it was a joke, because the alternative is so much more horrifying. I think Romeo might be a vampire for a minute? And Juliet keeps getting mad because he's tearing off her clothes and now she has nothing to run away in?

I can't in good faith tell you to read this, but it's so bizarre that I just didn't want to be the only person who waded through it.

While not the best written story on this list, I'm giving this one points for total out-of-the-box creativity. Elizabeth Bennet is an avenging angel sent to punish men for their crimes against women. However, instead of punishing Wickham for his crimes she gets a little dominatrix-y with Mr. Darcy instead, who is characteristically not amused. When she reports back to Heaven (or whatever) and finds out her mistake, her punishment is to become Mr. Darcy's sexy slave (or something).

And the Fire Consumes

Light some candles and treat yourself, you dirty Victorian lit-lover.

More like this
50 Books About (& Inspired By) Greek Mythology
By Morgan Leigh Davies
'The Sandman’s Ending Is A Departure From Neil Gaiman’s Comic Book Series
By Kadin Burnett
I've Read The Harry Potter Books 30+ Times & This Plot Hole Haunts Me
By Kelsey Stiegman
10 Must-Read New Books Out This Week
By K.W. Colyard
Get Even More From Bustle — Sign Up For The Newsletter