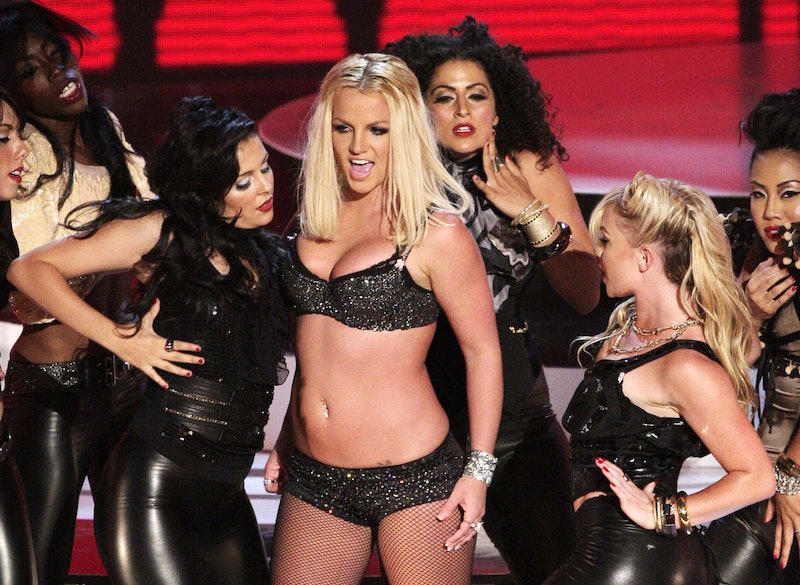 Everyone has her spirit animal celebrity guide — you know, that tabloid-bait star that you'll always love, no matter how many sartorial disasters and public meltdowns she weathers — and mine is Britney Spears. Maybe it's because I came of age in the golden era of early Millennium pop music, maybe it's because my childhood best friend and I choreographed an entire dance routine to "Sometimes," or maybe it's because her vacant eyes and robotic dance moves genuinely break my heart.

I've followed Britney's post-breakdown "career" with interest, not because it's in any way artistically fulfilling, but because the workings of the Britney machine (her label, her managers, her PR person, her costume designer, her mother, and whoever else has their claws in her) are darkly fascinating. Today, the sub-par products produced by the machinism of Britney sell not because they're good, but because the allure of her one-time golden-girl persona is still so strong.

Brit has a new single out called "Work Bitch," and, surprise, it's yet another overproduced dance-floor train wreck that's as catchy as it is vapid. The song describes Britney's life (if nothing else, she's always been a hustler), but it's also an unintentionally ironic statement of elitism, since she doesn't really have the goods to back it up; the lyrics would make more sense coming from someone who is truly on top of her game right now, like Queen Beyoncé.

Still, I waited for the "Work Bitch" video with the bittersweet hope that characterizes those of us who still love/pity Britney, hoping beyond hope that this time, we'd see the "real" Britney again; hoping that this video would prove once and for all that she's not just a robot powered by the celebrity machine, that she's still got the moves/body/star power, that she really is Britney, bitch.

If there ever was or will be a "real" Britney Spears, this video does not reveal her. It's painful to watch. The same shots are reused again and again, the narrative is non-existent, and the blatant S&M stylings might be edgy if they hadn't already been done onscreen by Rihanna ("S&M"), Christina Aguilera ("Not Myself Tonight"), and Lady Gaga ("Alejandro")... several years ago.

Instead, Britney's numerous looks are, without fail, cheap stripper clothes: Her outfits run through a (limited) series of variations on the same tired micro shorts-and-bikini-top outfit that she's worked so disastrously since her infamous 2007 VMA performance. Instead of focusing on eye-catching details, like the daring makeup and textured manicures that Ke$ha and Rihanna tend to feature in their videos, Britney makes do with the tacky bells-and-whistles (zippers! fringe! cut-outs! crop tops!) that characterize cheap tween mall stores like Wet Steal.

Check out this tasteful boudoir outfit:

Oh, and here's a nice secretary-turned-dominatrix get-up which looks like a two-for-one clearance rack score from Charlotte Russe:

Not only are her clothes cheap, but they're dated, too; her look is stuck in the sort of campy sex appeal that was en vogue circa, well, Britney's own heyday:

Dear embellished-denim-and-extravagant-crop-top combo, I guess we're still a Slave 2 U:

Hmm, it looks suspiciously like something a younger, more stable Britney wore:

Don't get me wrong; I wasn't expecting an Alexander McQueen show here. I am under no delusions whatsoever about the quality of Britney's most recent "work." I just don't get why no one is trying a little harder to update her look, especially if the Britney Machine is so insistent on churning out new singles, tours, and albums.

We are firmly in the era of the couture pop star. Whether we're talking about Lady Gaga's freakshow couture or Jay Z's "performance art," the music video has become more and more narrative, visually striking, and faux-artsy. Even fairly low-brow singles, like Ke$ha's music video for "Blow," are carefully produced and full of clever details like men in unicorn heads. Gaga's videos are basically short art films, and Rihanna and Miley Cyrus have fully cashed in on lucrative, bizarro hipster grit (I give you "We Found Love" and "We Can't Stop," respectively).

Clearly, there's enough money in today's music to hire talented filmographers and stylists — Terry Richardson directed "Wrecking Ball," for goodness' sake! Other pop stars, no matter how talentless, are benefiting from careful image-crafting that comes from appropriating cool from high art, lowbrow hipsterdom, urban swagger, and everything in between. And, for the most part, their teams are doing it for them.

Why isn't anyone doing that for Britney?

Why is Britney the only major pop star whose videos seem stuck firmly in 2008? The only one still wearing the outfits of her youth, even though they're clearly not right for her body anymore? The one who always seems a few trends behind, a few career moves out of the real limelight?

It's obvious that Britney Spears now carries more weight as a brand than as a person. The idea of Britney is far more appealing than the reality. I doubt she's making very many artistic choices these days; it's likely that everything from her robotic choreography to her cheap, predictable outfits has been chosen for her by higher-ups. You'd think it would be in their best interest to freshen up the brand that is Britney Spears — but the Britney Machine is firmly stuck in its ways. It's like no one, not even her managers, has faith in a truly revamped Britney. They found a formula that worked years ago, and they're determined to squeeze the life out of it as long as they can, because they know it will sell — and they know it won't last.

That's creepy. That's sad. That's so American-celebrity-culture. And that's why Britney continues to haunt me, no matter how many shiny, wrinkled outfits she dances in, puppet-like.