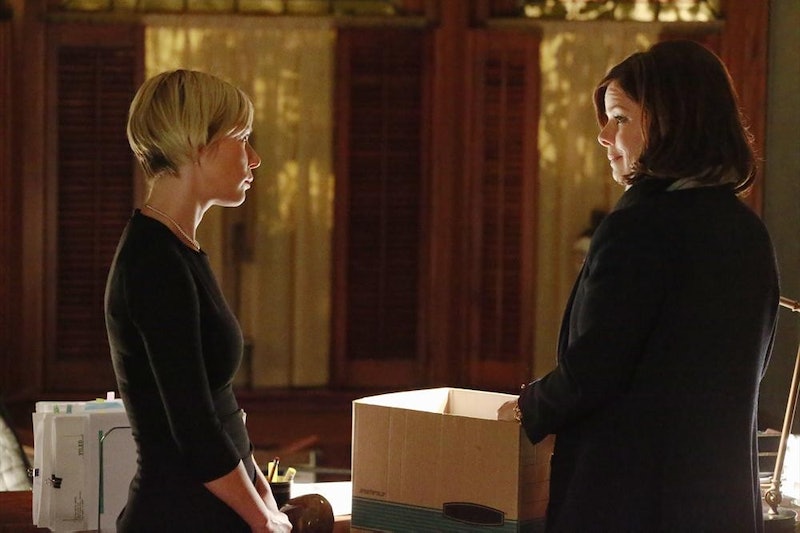 It was a little hard to pinpoint where How to Get Away With Murder was going in its mid-season premiere. From the outset, it seemed pretty clear that the Keating 5 would find out that Annalise knows who killed Sam; we knew that proving Sam killed Lyla in order to exonerate Rebecca would stir some strange emotions in Annalise; and while I didn't know Annalise would use the murder as final exam material, the fact that she's putting the 5's get-away mission on their own plate rather than just giving them an answer is pretty characteristically Annalise. There didn't seem to be a real twist coming, but then in came Marcia Gay Harden as Sam's sister Hannah. That's when all hell broke loose.

It's unclear what Ms. Hannah Keating is up to, but she makes it very clear with her single line that she is not a fan of Annalise. Right when it seems like the group finally gets the investigation going in the right direction, Sam's sister shows up and declares Annalise unreliable. Everything is in jeopardy now.

Of course, before we get too into loving to hate Hannah for trying to put our ridiculously flawed heroes in jail, let's take a moment to praise Ms. Harden for owning the hell out of a 10-second scene: These three short episodes that close out Season 1 are going to be nothing short of amazing.

But what could Hannah know that could really derail this investigation? My bet is nothing. But that doesn't mean it will stay that way.

More likely than not, Hannah knows secrets about Annalise (remember, Annalise was the other woman before she married Sam, so Sis probably hates that) and she could very well know about the marital problems that Sam and Annalise had, if she and Sam were close siblings. However, Sam's "disappearance" is dripping with suspiciousness and Annalise's crew is a rather broody, guilty-looking set (looks great on a post for HTGAWM, not so much for actually getting away with murder). Hannah is going to start to piece things together, which will lead her to witness a conversation or stumble upon evidence. And, if we're really lucky, our finale won't be Annalise and the Keating 5 vs. the justice system, but rather Viola Davis vs. Marcia Gay Harden.