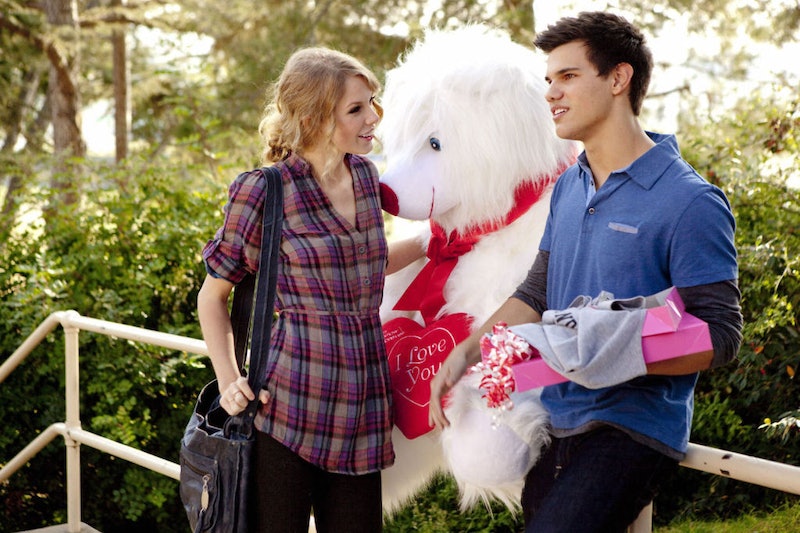 In today's cinematic history, Valentine's Day is celebrating it's fifth anniversary on February 12. That means it's officially been five years since the movie first both lifted my spirits and broke my heart. But while you may remember some of the big names the film features (Patrick Dempsey, anyone?), the film boasts such a big cast it's easy to miss the famous faces who claimed smaller roles. So I re-watched the film and made a handy list of all the actors you forgot were in Valentine's Day .

Although watching multiple couples fall in love is a bit hard to swallow when you're single, every year I come back for more. (My tradition is to drink a bottle of wine and sob while it's on — I wish I were kidding.) It utilizes a Love Actually style ensemble cast, and in fact, Valentine's Day has one of the largest ensemble casts in Hollywood's history. Rarely is a picture dominated by so many A-listers, but this film boasts everyone from Anne Hathaway and Bradley Cooper to Ashton Kutcher and Jennifer Garner. But here are the people you probably forgot showed up, too.

Their love story isn't the main one, so it's easy to forget that Taylor Swift and Taylor Lautner played a completely over-the-top high school couple. But even if you do remember them, I thought I'd remind you because it was perfect. Mostly because it was the birth of her amazing bad dancing.

The American Horror Story actress has a bit role as Jamie Foxx's news producer, and she's not shown nearly as much as she should have been.

The comedian plays a teacher at the high school who is flabbergasted by Emma Roberts admission that she's heading home to have sex on her lunch break.

In this movie he played an airline ticket agent. But he's been a character actor in just about everything from 10 Things I Hate About You to Princess Diaries. You probably know him from the latter as Paolo, Anne Hathaway's hairstylist.

In Valentine's Day she plays Nikki, the blonde who works at the florist's shop. But she's also another Princess Diaries familiar face. She played the queen's right-hand lady Charlotte.

In this movie he plays Edgar, but is most famous (in my heart) for his role as Joe the driver in Princess Diaries.

The Criminal Minds actor has a small part in Valentine's Day where he yells at Ashton Kutcher for being a bad driver.

You may remember him as the kid from The Switch with Jennifer Aniston and Jason Bateman. But before that he was in Valentine's Day pining after his elementary school teacher.

The Maids From Princess Diaries 2

Shea Curry and Anna A. White have small roles in Valentine's Day as Jessica Biel's friend Elise and the dancing weather girl, respectively. I wasn't lying when I said the whole Princess Diaries cast is in this movie, and it's most likely because both films have the same director.

These two charmers are also both from, you guessed it, the Princess Diaries franchise. They popped up in Princess Diaries 2 as Lord Crawley and his brother. In Valentine's Day, Peter plays Cupid and Paul plays the guy that annoys Topher Grace.

This ESPN anchor played herself as she reported on the football career of Eric Dane's character.