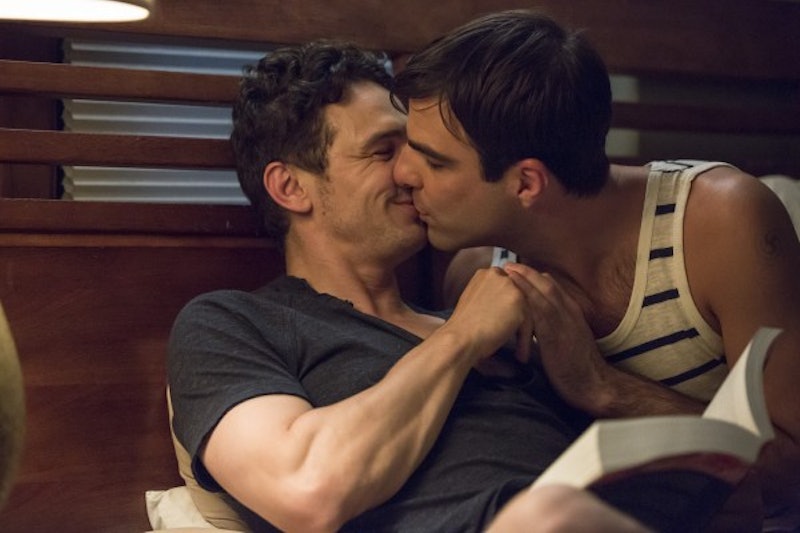 The running joke, which sparked an entire SNL opening monologue, is rooted in truth: James Franco has no free time. At Sundance Film Festival 2015, the actor/writer/director/producer/artist/professor/poet/general renaissance man had two films premiere, True Story and I Am Michael. Both films are controversial in nature: In True Story, Franco takes on real life serial killer Christian Longo. And in I Am Michael, Franco portrays another real figure: Gay rights activist turned self-proclaimed straight pastor Michael Glatze.

After the film's premiere at the festival on Thursday night, Franco answered questions from the audience about his inspiration for the character and his view on religion. "He was here," he told the crowd of the real Michael Glatze. "He came and saw the movie last weekend. He made a point to come up to each of us and say thank you, and that he loved the movie. I think he said it was kind of healing for him and helped him move back from some of his more extreme views."

The film toys with ideas of sexual identity, religion, marriage, and the afterlife. When asked if Franco's religious views changed from playing this character, he answered openly. "I respect all religions and all different kinds of different sexual orientations," he began. "[Playing this role] didn't change anything I believe. Michael says at some point in the film, 'It's about love, it's just about love,' and for me, if I could boil it down, that is the most important part of any religion. If I ever get into a situation where a certain kind of belief is going to make me think less of another person, or control my life in ways that are not for me, then I'll move away. But the love part of religion, the giving part of religion, are very important to me."

And while playing a convicted serial killer sitting on death row and an activist-turned-priest are worlds apart, he assures the audience his methods for both men, depend on the person he's portraying. "I've played a lot of characters based on real people. Every character is different, and how you get into a role is always different and the degree to which I engage with that [real] person, or study the nuances of that person's behavior vary from person to person. With this role, I thought what is primary here is his journey, his experience, his transformation — his beliefs and how those change."

Also starring Zachary Quinto and Emma Roberts, I Am Michael does not have a release date set.