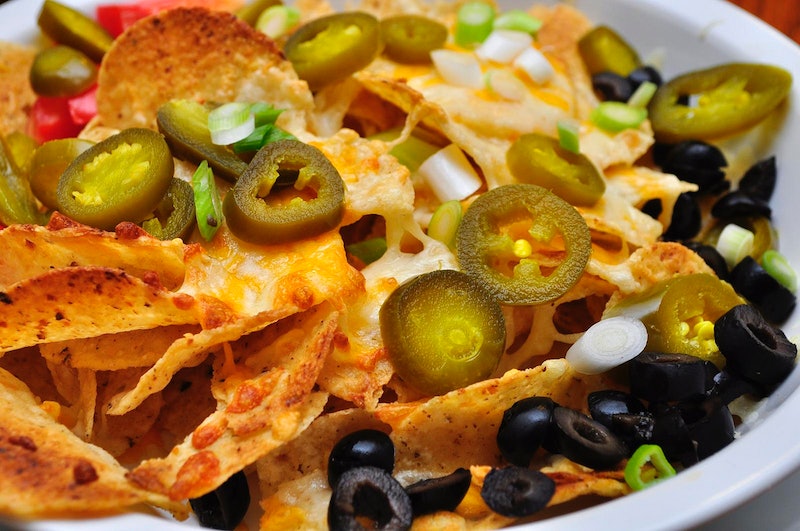 I love nachos, but I am somewhat less enamored of that weird, orange goop known as "nacho cheese." This is mostly because I've never been able to figure out exactly what "nacho cheese" is made of. And now, I'm more convinced than ever that I've been justified in my avoidance of the stuff over the years: Apparently, it doesn't actually exist. The concept of "nacho cheese" belongs in more or less the same category as unicorns, Tinker Bell, and the Jersey Devil. Is that crazy or what?

Bloomberg's Venessa Wong recently traced the history of nacho cheese in an attempt to find out what, precisely, it is — and the journey ended up being longer and weirder any of us probably ever expected it to be. Legend has it (according to the San Antonio Express-News) that nachos as we know them first came into being in 1943. The creation of Ignacio "Nacho" Anaya, who was working at a restaurant owned by Rudolfo de Los Santos at the time, whipped up the dish as an appetizer for a group of roughly 10 wives whose husbands were stationed at Fort Duncan Air Base. The cook was missing, oddly enough, so Anaya ran into the kitchen, grabbed some tostadas, grated on some cheese widely believed to be cheddar ("Wisconsin cheese, the round one," Anaya's son recalled), and hit the whole thing with a type of broiler called a salamander. Add some jalapeno slices, and voila!

So, from this origin story, it would seem that "real" nacho cheese is, in fact, simply cheddar. But here's where it gets weird: Wong discovered that although the FDA defines over 70 different cheeses in the name of correct labeling... there is no entry for nacho cheese.

To quote a beloved if slightly overplayed video game meme, the nacho cheese is a lie.

Just to confirm this fact, Wong even went to a bunch of different food companies to double check. Mike Siemienas, spokesman for Old El Paso parent company General Mills, said that what they use as nacho cheese "really is based on what consumers are used to and what they believe nacho cheese flavor is." Sarah Hill of the WIsconsin Milk Marketing Board told Wong, "There really is not a Nacho Cheese per se. There might be some jarred cheese blends on the market that say 'nacho cheese,' but again, these are blends that are meant to heat up and dip chips into." A nutrition and labeling expert said, "There is no definition or standard for nacho cheese.... Each company that makes a nacho cheese product has a different recipe." And Aurora Gonzalez, a spokeswoman for PepsiCo, which makes Doritos, said, "The [Doritos] flavor Nacho cheese is made with cheddar and Romano cheeses... [but] I've never heard of a specific definition."

Although maybe "nacho cheese doesn't exist" isn't actually the best way to put it. Consumerist described it as "whatever you want it to be," which might be slightly more accurate. But you know what's really kind of nutty? Even though I still think that goopy orange stuff is gross, in some ways, maybe it's almost better that there's no official definition of nacho cheese. It's kind of freeing, is it not? I mean, if there are no rules, then anything you want to call "nacho cheese" automatically becomes nacho cheese. I can get behind that idea.

I was already planning on making nachos for dinner tonight — but there will be no goop in my kitchen. Instead, I'm going to use a blend of shredded Monterey Jack, cheddar, Colby, and maybe some pepper jack to spice it up a bit. That's my nacho cheese. What's yours?