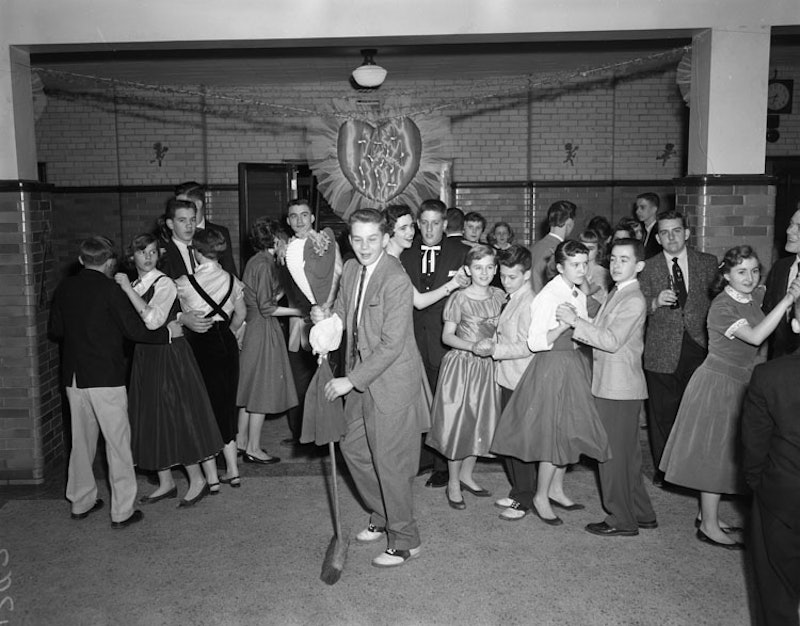 I don't have the exact numbers, but I'm sure you can find approximately 10 billion anti-Valentine's Day think pieces sprinkled all over the Internet during any given February. Every year, the haters rage against this mushiest of holidays and all the Valentine's Day traditions we've come to despise: It's cliché, it's passé, it's hurtful, it's commercial. It's boring, it's unhealthy, it excludes people, there's too much pink, nobody really likes boxed chocolates anyway. And sometimes, sadly, even those who adore Valentine's Day end up proving the haters' points by celebrating Valentine's Day in the most banal, predictable ways — you know, shuffling to CVS at 4 p.m. on February 14 to buy the last heart-shaped box of chocolates, or half-heartedly feeding each other fondue at a tacky restaurant because ISN'T IT ROMANTIC?

A good Valentine's Day should be sweet — and chocolatey and foamy with champagne — but not saccharine, and certainly not passé. What better way to bring back a little imagination and strangeness into a day that's always been pretty crazy (um, it's named after a saint who got in trouble for helping soldiers get married) than by resurrecting Valentine's traditions from centuries past? Skip the gas station roses, and get weird like the ancients did.

1. Wear your heart on your sleeve

There are varying theories about the exact origin of the phrase “heart on your sleeve,” but one thing is clear: in ye aulde days, people took that phrase very literally. Whether jousting knights were tying their bae's handkerchiefs around their arms, or Roman soldiers were pinning their new girlfriend's names to their sleeves, you were nobody until you had somebody's name on your bicep.

2. Make your own Valentine card

DIY-ing your Valentine card was super trendy in the Middle Ages, and the gesture continued to be popular up until, well, that whole Hallmark thing happened. Draw upon our rich collective cultural history — and your kindergarten arts and crafts skills — by cutting your own paper, gluing on your own sequins, and writing your own poem to create a little love-artifact that's almost completely free from the stamp of mass production.

3. Bring back the art of the super corny pun

Even when cards were already being mass produced, Valentine's Day cards used to be much different than they are today. No pun was too cheesy, no piece of wordplay too groanworthy for an old school Valentine. I'll admit that this one is a little, um, aggressive, but how can one resist puns like "I GOPHER you a HOLE lot"? If you're sick of artisanal foil-press hipster cards that say things like “Let's eat tacos,” then you're probably ready for this type of next-level punning.

Niagara Falls has long been a romantic destination for honeymooning couples, and its popularity as the "Honeymoon Capital" peaked during the first half of the 20th century. Today, it's a bit heavy on the casinos, but the falls are obviously amazing, and the vintage love-vibes remain. Drive up with your love, stay in the cheesiest motel you can find, and eat hamburgers while marveling at the wonders of the modern world, like cars and color TV!

If your friends are single and really ready to mingle, here's an old Roman party game for the ages: Write half of the party guests' names on a slip of paper, have the other half of the party draw names, and force — uh, encourage — everybody to pair up for the night. As Henry Bourne said in his Antiquitates Vulgares (1725),

The names of a select number of one sex, are by an equal number of the other put into some vessel; and after that, every one draws a name, which…is called their Valentine, and is also looked upon as a good omen of their being man and wife afterwards.

6. Take your soulmate search to the next level, zombie-style

According to exactly one site on the internet, “some people believe” that going to a cemetery on Valentine's Eve is practically a fail-proof way to meet your future spouse. All you have to do is walk around the church at midnight 12 times, and then you'll dream about him/her. HAPPY NIGHTMARES!

7. Give flowers that actually mean something

You've probably noticed that red roses mean “true love,” but with the right blooms, you can say so much more than I Luh Ya Papi. For example, heather symbolizes admiration and good luck, peonies stand for romance and prosperity, Queen Anne's Lace represents sanctuary, and sunflowers represent warmth and happiness. So much more nuanced than “swipe right, swipe left.”

8. Pin sage to your pillow

Want to dream of your future husband — or just have a really relaxing night's sleep? Pin five sage leaves to your pillow (one on each corner, one in the middle) and slumber the night away, like rural Englishwomen did in the 1700s.

9. Give someone a special key

It can mean something as dreamy as “unlock my heart,” or it can be something a little more practical. In Padua, Italy, epilepsy is also known as St. Valentine's Malady, and to this day, children in Monselice, Padua are given little gold keys every February 14 to ward off the condition. After all, nothing is more romantic than a little piece of jewelry that screams, "I hope you don't get epilepsy this year, darling."