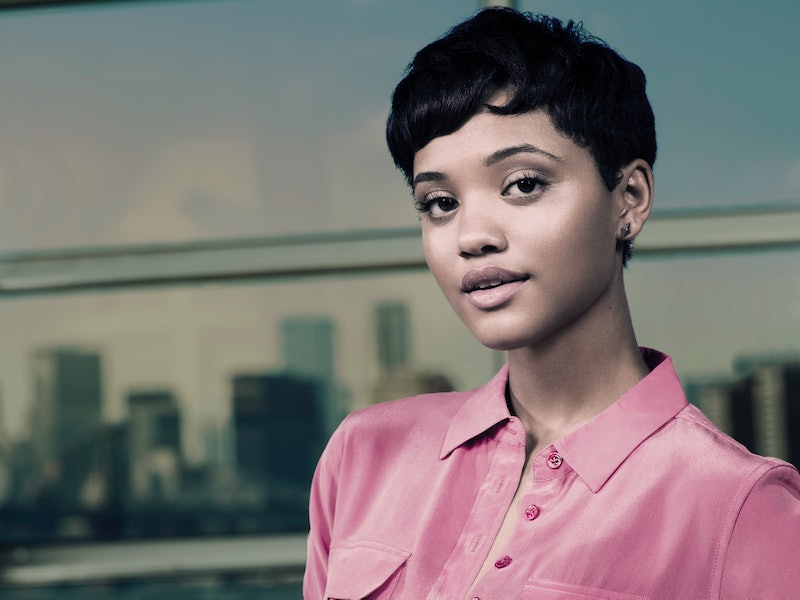 Though you may already recognize her thanks to her new, much talked about series, there's still a lot more to know about Eye Candy star Kiersey Clemons, who plays Sophia on MTV's new thriller series. The 21-year-old Pensacola, Fla. native stars opposite Victoria Justice as the glamorous, independent roommate of Lindy, who is being stalked by a New York City serial killer. Sophia is also the owner of an NYC flower shop, which secretly opens up into a highly successful night club. (I know. Someone needs to make one of those in real life ASAP.) But what's the actress like off-screen? I spoke with Clemons to find out what she thinks of her character, the elusive Eye Candy killer, her co-stars, and more.

"I thought Sophia was sketchy the whole season," Clemons says. "There were times where I was like, ‘OK guys, seriously? What is going on? Why is Sophia saying that, why is she doing this?' But everyone is really sketchy...that’s what makes the show so great, because everyone has a favorite. So it’s funny because everyone is gonna have that feeling of, ‘oh no, my favorite person may be the killer or get killed off.'"

Once you pick a favorite character on a new show, you become obsessed. After a while, you're stalking their Twitter, double-tapping their Instagrams, and trying to figure out what exactly it is they do in their everyday lives. Well, if Sophia is that character for you on Eye Candy, you'll be happy to know that Clemons is just like any other 21-year-old in real life. She hikes, reads, loves art, and cherishes her independence. She even says that moving to New York for Eye Candy helped her find herself. In fact, its setting is part of what drew Clemons to the role.

“Eye Candy was just like any other audition, but I was really excited about it because it filmed in New York and I always wanted to move here but I couldn’t," she says. "I had a really great connection with Christian Taylor, our show writer, and more than anything I really wanted to work with him so I wanted to take the opportunity. It was between either doing Eye Candy or the movie I just did at Sundance, Dope, and they worked it out so that I could do both. So I feel like a winner, I’m so happy.”

When Dope was released, the cast and producers had no idea what to expect or how it would be received. "We keep saying we want to see it as an outsider, from their perspective," Clemons says of the film's audience. "But everyone was just as happy about it as we were so that always feels good."

Being so busy with both Eye Candy and Dope, Clemons hasn't had a spare second to read the R.L. Stine novel the series is based on, but says the two are so different, reading the book may not help you predict Eye Candy's TV ending. “Everyone that read the book and that’s watching the show is trying to keep up and they think they know the answers, but no one really knows," she says. "Reading the book is not gonna spoil anything for the show."

While many fans are wondering if one of the main characters on Eye Candy that they've grown to love could end up being a killer, it seems that possibility hasn't stopped the actors from growing close to one another. According to Clemons, the cast is very close.

Now that filming is over, everyone’s back to auditioning again and taking meetings all over the place, but Clemons still meets up with her castmates whenever she can to get lunch or hang out, in addition to their weekly Eye Candy viewing parties. "We get together every episode on Mondays and watch it together, and I love that we do that. We got really lucky because t’s not everyday that you get a cast where everyone gets along with each other.”

It's also not everyday that you get a cast where everyone gets in trouble together — and enjoys it — but that's exactly what happened with Clemons and her co-stars. “It was Halloween and Casey [Deidrick] was like, ‘Guys, there’s an abandoned building and there’s ghosts in there apparently, let’s go sneak into it.’ We ended up getting caught and got trespassing tickets."

For a girl who hasn't even gotten a speeding ticket in her life, this is an Eye Candy memory Clemons won't soon forget. She says she was excited to discover she had a rebellious side of her and even found herself hoping it would go on her record. Whether something much more serious will soon go on her character Sophia's record, we'll have just have to wait and see.