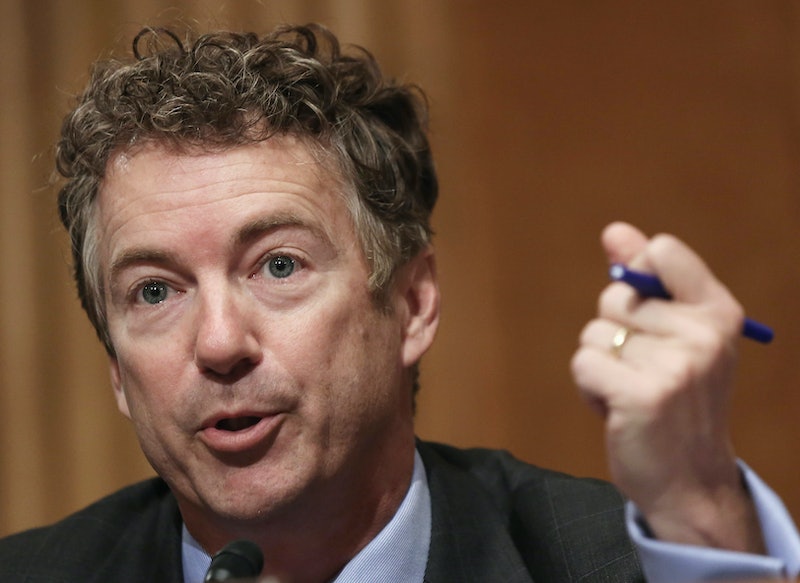 On Friday, the first major dustup of the nascent Jeb Bush presidential campaign hit the pages of the Boston Globe. And while it may not have been might of an issue for a left-wing, progressive-minded politician vying for the White House, for Bush, it's actually quite a doozy. As it turns out, he was toking on the regular back in his college days, a fact he was forced to admit after a college friend came forward. Now, his possible primary opponent Senator Rand Paul is calling out Jeb Bush's marijuana "hypocrisy," accusing the former Florida governor of wanting to lock people up for doing the very same things he did in his youth.

And you know what? He's not wrong. Paul has always been an interesting figure among the Republican right, possessed of a decidedly libertarian bent — he'll say something that sounds refreshing and downright exhilarating one day, and something that makes your blood chill a little the next. But on the intersection of recreational drugs, race, and the American justice system, he's one of the few nationally known Republicans willing to break with staid party orthodoxy. And in this case, it comes with a lot of political convenience. It never hurts to get an early start branding a likely foe as a hypocrite, right?

Speaking to The Hill, Paul shared his dim view of Bush's admission, while also conceding that this was a problem for many "people on our side."

I think that's the real hypocrisy, is that people on our side, which include a lot of people, who made mistakes growing up, admit their mistakes but now still want to put people in jail for that. Had [Bush] been caught at Andover, he'd have never been governor, he'd probably never have a chance to run for the presidency. I think in politics the biggest thing, the thing that voters from any part of the spectrum hate worse than anything is hypocrisy. And hypocrisy is, "Hey I did it and it's okay for me because I was rich and at an elite school but if you're poor and black or brown and live in a poor section of one of our big cities, we're going to put you in jail and throw away the key."

Frankly, Paul is 100 percent spot-on in this analysis. Especially because the full context provided by the Boston Globe's piece on Bush's college years doesn't merely expose him as a recreational cannabis user — a pastime countless people would sympathize with under different circumstances, myself included — but reported he'd helped his friend, Peter Tibbetts, acquire some hash (a heavily concentrated form of THC, the active ingredient in marijuana). And as anybody with a passing knowledge of U.S. drug enforcement knows, facilitating a drug deal is a good deal more serious than just blazing up yourself.

In fact, thanks to the folks at the National Organization for the Reform of Marijuana Laws (NORML), we can see precisely what price Bush would've paid under his own state's system, if he'd been tried and sentenced in Florida for the things that Tibbetts alleges.

Pretty mind-boggling, no? It's also worth noting that convicted felons lose their voting rights under Florida law, even after their time has been served. So, chew on that — if Bush got busted the same way his state likes to bust people, he'd be committing voter fraud if cast a ballot. Of course, if he applied for executive clemency five years after getting out of prison, he might get lucky.

In spite of all this pretty compelling life experience (and who knows if he's ever really reflected on it seriously), Bush didn't show much sympathy for the humble marijuana user while governor. Nor has he lately, for that matter: he opposed a Florida medical marijuana initiative during the 2014 midterms, a pretty staggering fact in view of public opinion on the issue — a narrow majority of Americans now support outright recreational legalization, according to Gallup.

Basically, this is all a lengthy way of saying, yes. Rand Paul is right. By his own admission Friday — "I drank alcohol and I smoked marijuana when I was at Andover. It was pretty common." — Jeb Bush is indeed a hypocrite. And, given the enormous number of lives that have been forever-shredded by both federal and state-level laws on marijuana, a pretty nasty one.