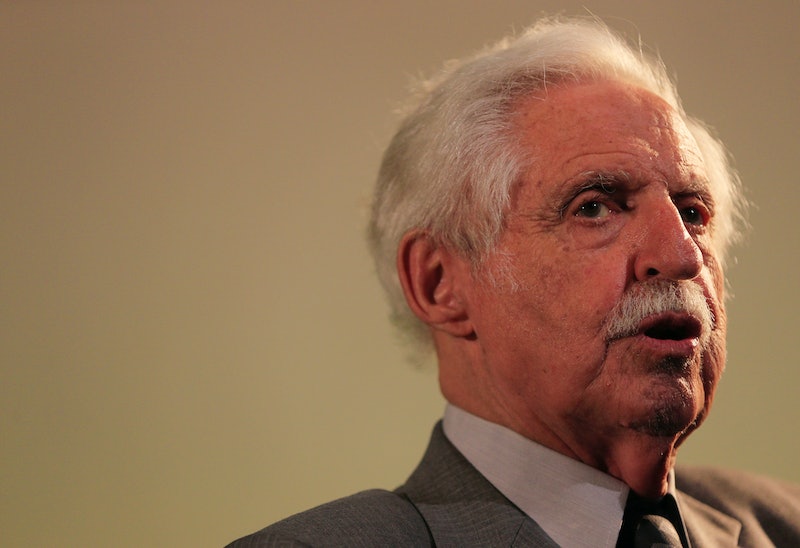 His work changed the contraceptive landscape forever, and without his research, many women across the world would be short one very important daily pill. Following complications resulting from cancer, Carl Djerassi, the father of the birth control pill, died at the age of 91 in his home in San Francisco. The Austrian native moved to the United States in 1939, where he pursued an enormously successful career in chemistry, leading a team of scientists who would ultimately develop and synthesize norethindrone, the key ingredient in the earliest form of the birth control pill. The drug ultimately revolutionized the degree of agency women maintained over their own sexual practices, and today, nearly 30 percent of women take a daily dosage to prevent unwanted pregnancies.

Born in Vienna, Djerassi spent much of his early life in Bulgaria, before fleeing World War II ravaged Europe for the United States at the age of 16. With only $20 in his pocket, he and his mother arrived in New York nearly penniless, and had the last of their money effectively stolen by a dishonest cabdriver, writes Robert McFadden in the New York Times. But not to be discouraged, and unperturbed by his own humble beginnings, Djerassi decided to turn to the big guns for help — he wrote Eleanor Roosevelt for help, and as luck would have it, was awarded a college scholarship. Little did Mrs. Roosevelt know at the time, but she helped fund the education of the man who would soon transform modern reproductive medicine for good.

After a brief stint at Tarkio College in Missouri, Djerassi graduated with honors from Ohio's Kenyon College in 1942 at only 18 years of age. Just three years later, he obtained his doctoral degree from the University of Wisconsin, as well as his American citizenship. His academic prowess came as no surprise to those who knew him — in Vienna, he was known as a brilliant student and a quick learner, and his interest in medicine likely stemmed from his father, who was a doctor himself.

In the years immediately following his graduation from the University of Washington, Djerassi worked as a chemist for Swiss pharmaceutical company Ciba, where he was awarded a patent for the development of Pyribenzamine, the first commercial antihistamine. So if you're a woman on birth control with allergies, you owe twice as much to the late Dr. Djerassi.

But his real breakthrough came after his appointment as the associate director of research at Syntex in Mexico City, where his work with cortisone ultimately contributed to the development of the pill. Soon thereafter, he was made the president of Syntex Laboratories in Mexico City and Palo Alto, a position that garnered him considerable fame and fortune. In addition, Djerassi served on the faculty of Stanford University, where he taught until retiring in 2002.

Known as the epitome of the modern day renaissance man, Djerassi's talents far exceeded the field of chemistry. In a statement released by the Stanford chemistry department, Professor Richard Zare noted, "Carl Djerassi is probably the greatest chemist our department ever had." But more importantly, Zare added, "I know of no person in the world who combined the mastery of science with literary talent as Carl Djerassi."

Djerassi was a cattle rancher, and bought a 1,200 acre property in Woodside, California shortly after joining Stanford's faculty. He also was a generous and well-educated patron of the arts, and began an extensive art collection that prominently featured the work of Paul Klee. After the tragic death of his daughter, an artist, in 1979, Djerassi devoted even more of his time and resources to advancing cultural pursuits, transforming half of his expansive Woodside property into an artists' colony, providing housing and facilities for a vast number of visual and performing artists, writers, playwrights, choreographers and composers.

But not only did Djerassi appreciate art, he was also a talented artist himself. A playwright, his productions made the stage across the world, with performances in Europe, Asia and the United States. In fact, “An Immaculate Misconception: Sex in an Age of Mechanical Reproduction,” “Taboos,” “Three on a Couch” and “Phallacy” were produced off-Broadway. A talented wordsmith, Djerassi also penned a number of books on a wide variety of subjects, including his scientific rumination about the pill and its uses, as well as novels and memoirs. He focused considerable attention on a genre he called "science-in-fiction," which dealt with the ethical dilemmas faced by modern medicine and their practitioners.

Perpetually ahead of his time, Djerassi published an article in 1970 considering the possibility of a male birth control pill, thereby somewhat removing the onus of responsibility for contraceptive use from women's shoulders. A year earlier, he also penned a paper examining "the global implications of U.S. contraceptive research." At the time, Djerassi noted, "The thoughts behind these two public policy articles had convinced me that politics, rather than science, would play the dominant role in shaping the future of human birth control."

Of course, Djerassi was not the sole mind behind the pill's conception, and throughout his life, he maintained a distinct humility about his role in the process. In a 2000 interview with Nicholas Wroe of The Guardian, he said,

Yes, I am proud to be called the father of the pill. But identifying scientists is really only a surrogate for identifying the inventions or discoveries. Maybe it is true that Shakespeare’s plays would never have been written if it wasn’t for Shakespeare. But I’m certain that if we didn’t do our work, then someone else would have come along shortly afterwards and done it.