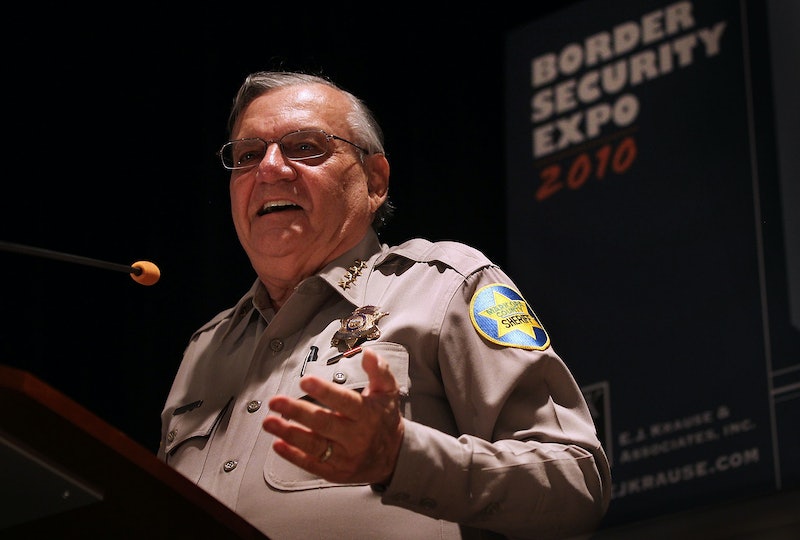 Arizona Sheriff Joe Arpaio has faced a lot of criticism for his tough* approach to immigration enforcement. He’s been accused of many controversial** practices, and was eventually sued by the Justice Department for his hard-line*** tactics. However, all that is about to change, as a federal judge ruled today that Arpaio and his underlings routinely violated the constitution and, as such, will be subject to an independent monitor and community advisory board from now on.

Arpaio ran a pretty horrific excuse for a Sheriff’s office, and it’s a small wonder he isn’t in prison. In addition to routine racial profiling and unlawful detainment of Latinos, he repeatedly violated women’s rights in ways more fitting for an Eli Roth film than a law enforcement office.

To take just one example: According to the DOJ’s complaint, a Maricopa County Sheriff’s Office (MCSO) officer once pulled over a five-month pregnant woman (and United States citizen) in her own driveway and demanded that she sit on the roof of her car. When she refused, the officer slammed her stomach-first into the car three times, dragged her into his cruiser and made her sit in the back seat without air conditioning for a half hour. She was subsequently given a citation for failing to provide proof of insurance, a citation that was subsequently dismissed. Miraculously, her baby was born healthy in 2011.

So that’s who we’re dealing with here. Realizing that this man needed to be stopped, the DOJ launched several investigations into his department and sued him and his office last year (he’s also been sued by the ACLU and a group of Latino residents in the state).

The restrictions that U.S. District Judge Murray Snow placed on the MCSO today are very strict and far-reaching. Take traffic stops, for example. Officers will be now be required to radio in the reason for stopping a vehicle before making contact with the driver, and once they do stop them, the entire incident will be recorded with audio and video. Every traffic stop will have to be meticulously detailed and reported, and each report will be cross-checked with recording of the stop.

In addition, the entire department will undergo anti-discrimination training, and that training will be overseen by the aforementioned monitor. The office will have to codify its prohibition on racial profiling in print, and keep those prohibitions posted. And as the office is instituting all these changes, the court-appointed monitor will be, well, monitoring Arpaio to make sure he isn’t cutting any corners.

The new restrictions will be in place for at least three years, which means they could conceivably be lifted at that point if the office complies. Still, for the 3.8 million residents of Maricopa county, that’s three years of relief from a bigoted criminal masquerading as a law enforcement officer.