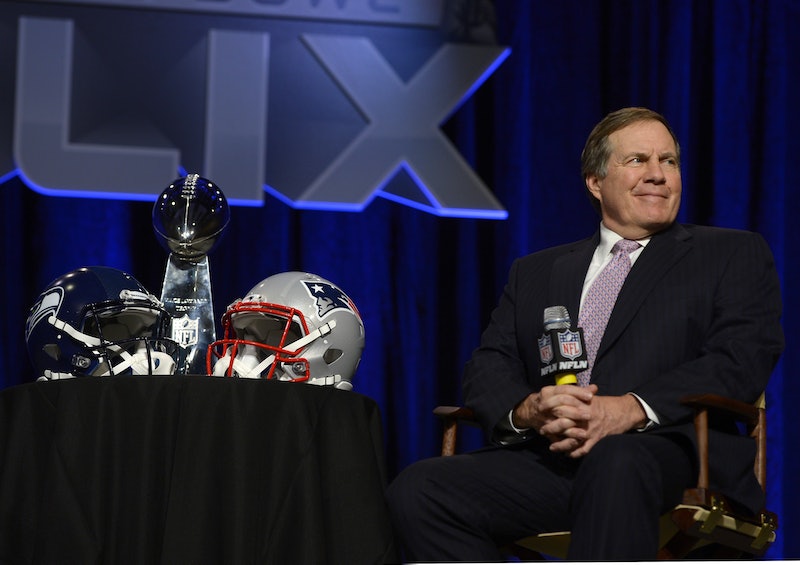 Well, that was a little awkward. In case you had any doubts about how a lot of folks sitting in University of Phoenix Stadium for the Super Bowl felt about Patriots coach Bill Belichick, something just happened that seems to lend a little insight — was Bill Belichick booed during the Super Bowl national anthem? Well, if you trust what you heard over NBC's broadcast of the game, and what's being reported on Twitter, then the answer seems to be yes.

It's not exactly a severe shock to find out that Belichick isn't popular with some in the Super Bowl crowd, with a lot of people in that stadium are rooting for the Seahawks, after all. But there was no audible swell of boos for Seahawks coach Pete Carroll was thrown up on the big, in-stadium screen, which suggests something of a divide in opinion, and even further, interrupting the anthem to boo an opponent is generally pretty damn frowned upon.

Obviously, it's impossible to know exactly why this happened — Belichick's long been one of the crustier, less-hospitable personas among the NFL's coaching ranks — but it's not exactly a stretch to think that his two-week embroilment in the DeflateGate scandal may have played a role in this.

Make no mistake, it wasn't as though the crowd was being entirely polite and silent throughout the rest of the anthem. And honestly, that's almost too much to ask from a hyped-up stadium full of 60,000+ people. And it also bears noting that not everybody was booing Belichick — it was more that unique, cacophonous sound you get when a customary amount of cheering runs into a surge of boos and jeers.

Regardless, however, it's not a very good look on national television. Obviously, some people don't take the ceremony of the anthem as seriously as others do. Everyone's probably been in a situation before when they've been less observant of a routine expression of patriotism than they were driven by whatever's flashing through their mind. But in the interests of good taste, it probably would've been better to wait for one of the other hundred times everyone could've booed Bill Belichick tonight — after all, considering how rough national anthems can get sometimes, hearing Idina Menzel's stirring, full-throated rendition was a breath of fresh air.