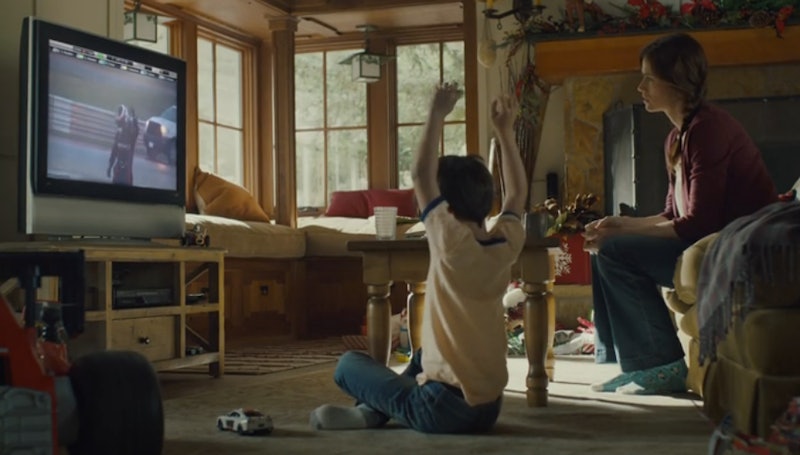 Was that a commercial, or the Oscar-nominated film Boyhood? The big game has been serving us a lot of tear-jerkers. First there were Budwiser's puppies, and now the Nissan Super Bowl Commercial about Fatherhood painted a dark picture. I think it was supposed to be inspiring, but I couldn't help but feel sad watching a mother watch her son's father risk his life in a Nascar race, and then the son wanting to be just like him. Maybe it's because I'm a woman, but I'm far more interested in that mom's story than the boy. Did they get divorced? What happened to her? This is so tragic! We watched this little boy grow up without his father. I don't want that for the son I don't have! Then, when the boy was a teenager, the Dad showed up after band practice in a Nissan. Was that supposed to be a happy ending? I guess it's a good thing that he was diversifying his interests by playing an instrument. Still, that's making me want to call my Dad, not buy that car, you guys.

Also, I kind of wish this commercial had aired later in the evening, when everyone was a few more beers in and the emotions could really have flowed. Harry Chapin's song "Cat's in the Cradle," which played during the boy's sad story, is perfect for a drunk singalong. Though, now that I'm thinking about it... it makes the commercial even sadder. That song does not have a happy ending. In the song, the Father regrets that "my boy was just like me" — what is Nissan telling me about the future of this Nascar driver's kid? Let's break the pattern, people. It's going to take more than just a red car to do that.

More like this
Lewis Hamilton Turned Down A Role In 'Top Gun: Maverick' For This Surprising Reason
By Darshita Goyal
At 28, Lesley Manville Was Acting, Picketing, & Singing Kate Bush Songs
By Olivia-Anne Cleary
Reese Witherspoon Gave Fans Hope For 'Legally Blonde 3' After This Surprising Movie Inspired Her
By Jake Viswanath
22 Movies On Netflix That Are Perfect For The Whole Family
By Bustle Editors
Get Even More From Bustle — Sign Up For The Newsletter