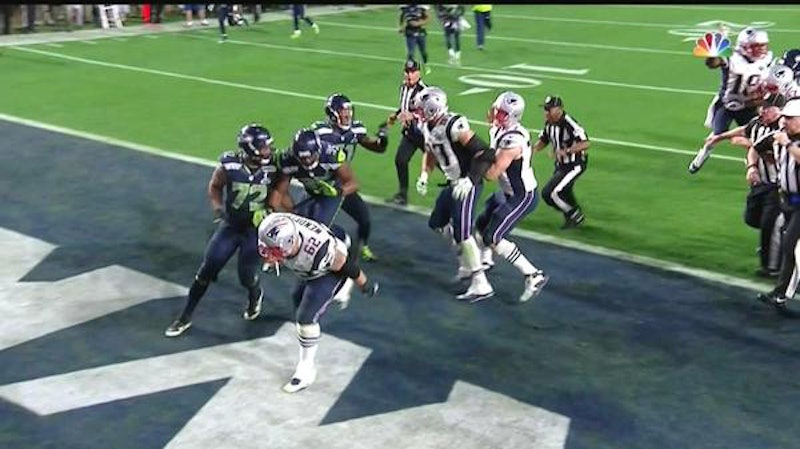 Well, that's it. Super Bowl XLIX is at an end, and the New England Patriots are the champions of the NFL, winning a game that turned a staggering, astonishing 360 degrees in a matter of a minute. And sadly, it concluded on a truly disheartening note: the Super Bowl ended with a brawl, and it was classless, to say the least. That's not to say it isn't understandable, to be clear — after months and months of sweating, grinding and putting their bodies and minds quite literally on the line, that moment when you realize "damn, we lost the Super Bowl" has to be as gut-wrenching as anything. And it was in that precise, helpless moment that the emotions of Seattle Seahawks player Bruce Irvin boiled over.

The circumstances that led up to the brawl are critical. After Seattle came up with one of the most indescribable, seemingly miraculous catches in Super Bowl history — a deep pass to the five-yard line that was knocked away from receiver Jermaine Kearse, but bounced around on his prone body long enough for him to barely nab it out of the air — every Seattle player on the field and sideline had to be thinking they had the game won.

After all, they had Marshawn Lynch, the most dominant running back in the game, and four plays to get just five yards. On the first play, they did what anybody in that position would do, handing the ball to Lynch, who charged for four yards, narrowly missing out on scoring the go-ahead touchdown.

On the second play, however, for some inexplicable reason, they decided to throw the ball, and it got intercepted. That's the essential thing to understand about this scuffle — in a matter of seconds, the Seahawks went from a yard away from a Super Bowl win, and Lynch in the backfield, to Super Bowl losers.

But it wasn't actually entirely over after the Patriots interception, and that's easy to lose sight of in all this. After the interception, the Patriots needed Tom Brady to take a knee twice, the first to burn Seattle's timeout, the second to start the clock running, and secure the win. But because of how far back against their own end zone the line of scrimmage was, Brady couldn't just take a knee immediately — he was still in his own end zone, so that would've been a safety, scoring two points for the Seahawks, and forcing the Patriots to kick the ball back to them.

Seattle had one chance, however remote, to knock the ball loose as Brady pushed forward to clear the yard he needed to take a knee and ice the win. But defensive end Michael Bennett spoiled the last gasp chance, jumping offside before the play began, earning a penalty that pushed the Patriots out of the end zone, and effectively, ending the game. It was after that penalty that Irvin let his emotions get the better of himself, sparking the full-fledged brawl, and earning himself an ejection. It was an ugly and decidedly unclassy way to end one of the best Super Bowls in recent memory. But, in all honestly, how many of us can say we might not feel the same way?