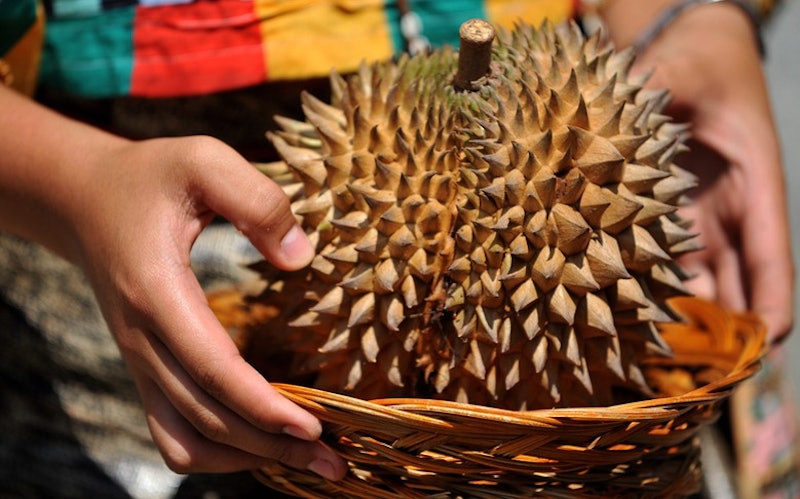 Throw away your cheap chocolate body paint and put those supermarket figs in the bin. Don't you know that 2015 is the Year Of Ridiculously Expensive Edible Sexiness? We started out grandly in January with Gwyneth Paltrow's Sex Bark, which works out at approximately $100 a serving, and now that Valentines Day is nearly upon us, we're being gently assaulted with gift ideas like a brooch made of pomegranate-shaped rubies and personalized Nutella. Aphrodisiacs: clearly, they're not for peasants.

So, in the pursuit of Living A More Gwyneth-Like Life, I have tracked down the 12 most ridiculous, elitist and expensive aphrodisiac substances in the world. The common theme is inaccessibility: if it can only be picked under the light of a full moon every 200 years, it's on here, and Gwyneth probably has a stockpile of it in her basement. We've got everything from whale vomit to tiger genitals. Your dinner party guests will be thrilled.

Let's be honest about this: 99 percent of the world's reported aphrodisiac foods and substances have as much of an affect on your nether areas as throwing a shoe at the moon. Only one of the things on this list has actually been determined to do anything of note to sexual function. The rest of them are either here because they look sexy (the rationale behind the Coco de mer nut is literally ho ho ho, buttocks ), or because they're so hideously rare and wallet-draining that they must also be libido-boosters. True fact: the more ridiculously difficult and expensive a food is, the more people will be clamoring to say it made them into raging hump-monsters. Humans are odd.

Let's start with the one food that's actually been proven by scientific studies to have an aphrodisiac affect. The stamens of the crocus flower, collected exhaustively by hand in Iran, Kashmir, Spain and Morocco, are tiny — you need 70,000 pounds of flowers to get just one pound of stamens — and the price is correspondingly astronomical. Currently it retails for $11,300 for 100g. If you want to mortgage your house to get a bunch, use it to spice up broths, stews, pastas, and baking.

Yartsa gunbu, which is known as the Viagra of the Himalayas, is a thoroughly disgusting thing. It's a fungus that burrows inside a host insect, usually a caterpillar, and kills it, ultimately erupting in a "sprout" out of the head. A pound of it may cost you $50,000, and the fungus should be made into tea or infused in water.

White truffles, or tartufi bianco, are the delicate, less common form of the highly-prized truffle fungus, which is found in the roots of forest trees in a tiny part of Europe and sought out by specially trained pigs once a year. Currently they're selling for $2270 a kilo, which is actually fairly cheap, as the harvest last year was a good one. (I had white truffle pasta on my honeymoon, so I can at least testify that this tastes completely amazing, though I can't recall any more dramatic surges of lust than usual.)

This is the rare aphrodisiac that you don't actually eat in its most desirable form. The mature nut of the coco-de-mer palm is gigantic (up to 20kg) and looks very much like the buttocks and thighs of a luscious lady, which has meant that many rich white people have tried to nab one (there's still one in Rembrandt's studio in Amsterdam, the filthy man). In its younger form, the jelly inside its cap is apparently delicious — but purchasing it in any form is excruciatingly expensive and very highly controlled by the Seychelles government, where it grows.

Well, there's no way getting around it: ambergris is whale vomit. It develops in the digestive system of the sperm whale, usually in response to some irritation like a squid beak, and is promptly vomited or expelled as poo, whereupon it floats around waiting for somebody to find it. It's grey, sticky and incredibly rare — it was used as a perfume fixative until somebody found a better synthetic version — and is actually illegal to possess in the United States; you'll have to go to France or Italy to get it. It can be used to perfume eggs, a dish that was King Charles II's favorite.

Another smelly substance that's mostly used in perfumes, this is the pod or scent gland of the male musk deer, which lies above their tail. Deers have to be killed to obtain the pod, and you need 30-50 deer to get one kilogram of the stuff, which means it's awful as well as smelly. The odor is meant to inspire incredible lust, but it's been forbidden to export it into the European Union since 1999, leading to a big black market.

At $50 per pound, iguana is not exactly an everyman's food, but it's gradually rising as a specialist ingredient in the USA, imported from Puerto Rico — partially because it's got a reputation for sexy shenanigans. Mark Douglas Hill, author of the Aphrodisiac Encyclopedia , thinks this is because the iguana has two penises, and cooks it as a roast — but it's also served up in stews.

This is just lazy. It's the same principle behind sea cucumber's reputation as an aphrodisiac: if it looks phallic, it's obviously going to help the male member. But that hasn't stopped tiger penis soup in Asia and bull testicle stew in the Philippines (otherwise known as Soup Number 5) being incredibly popular as sexual stimulants. Tiger penis soup, or hu bian tang, can retail for as much as $300 a bowl, but bull testicles are a bit less wallet-bashing, if you're choosy.

The birds nests in these soups are some of the rarest ingredients in the world. They're constructed by the spit of the bird in question, dried and hardened into a bowl-like shape for their eggs. They're delicate and incredibly rare — the nests sell for over $900 a pound — so, understandably, a bowl of boiled spit becomes a hideously expensive endeavor.

Durian fruit on its own is weird enough — it smells like rotting meat and tastes delicious — but it's got a very special aphrodisiac form: the fruits that have passed through the digestive system of elephants. As with anything that depends entirely on the whim of a wild elephant and the tolerance of the people picking fruit out of its droppings, this is an incredibly rare delicacy, only available in the jungles of Malaysia. Sorry if that messes up your dinner plans.

The oil of the agar wood or oud tree is the oil for the person who has everything, including a crude oil well of their own: it sells for $27,000 per pound. It's another fungus-born creation, made from the resin produced when fungi infect certain trees. The resin-soaked wood is hugely popular in the Middle East, and is meant to increase male virility and attractiveness (of course).

Honey is honey is honey, right? Wrong. If you're talking the most exclusive, ridiculous, expensive honey in the world, it has to be from the bees in Yemen's Wadi Do'an Valley. Selling at $200 per kilo, it's harvested from bee colonies feasting on the flowers of Yemen's sacred Sidr trees. It's being called liquid gold, which means it might feel slightly sacrilegious having it on toast.

More like this
20 Celebrity Couples Who You Forgot Dated In 2002
By Jake Viswanath
Meet The Spice Company Founder Who Sees Chai As A Metaphor
By Madhuri Sathish-Van Atta
If Your Refrigerator Is A Mess, These 25 Organizing Products Can Help
By Courtney Young
Here’s What Sarah Jessica Parker’s Canned Cosmo *Actually* Tastes Like
By Emma Garza
Get Even More From Bustle — Sign Up For The Newsletter