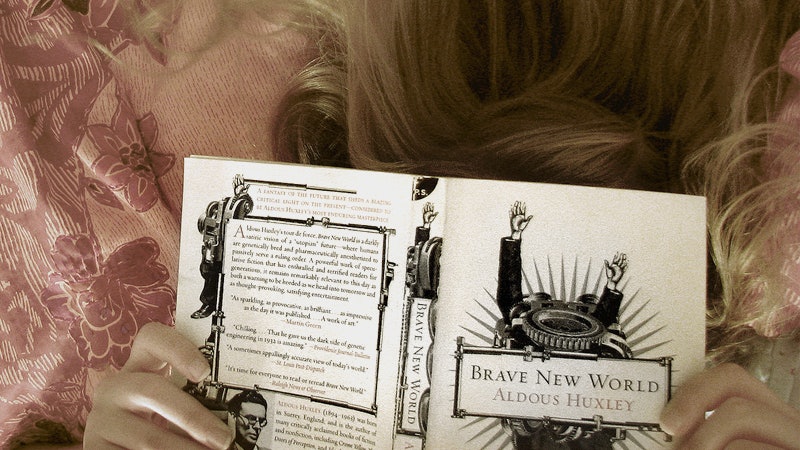 We are officially living in the future. The UK Parliament just voted to allow the birth of babies with three peoples' DNA to prevent genetic diseases, the world's smallest desktop computer is two inches square, and Swedish office workers are using skin-inserted chips as access cards. Flying cars are officially passé. But far before many of the inventions we now take for granted arrived, science fiction writers predicted them — often decades or centuries before the necessary technology was even a twinkle in an inventor's eye.

It's such a pervasive talent, in fact, that one of the best science fiction writers of the 20th century, Octavia Butler, wrote an essay with the tongue-in-cheek title "A Few Rules For Predicting The Future" for Essence Magazine in 2000. (Her hints include learning from the past, respecting consequences, and being prepared for surprises: predicting things accurately is a bit trickier than sketching robots on a bar napkin.) Of course, for every science fiction prediction that looks like clairvoyance, there are hundreds that didn't quite work out — where are the lunar colonies, damn it?! — because an educated guess is still just a guess.

Still, we have a nasty habit of viewing our scientific and technological development as progressive and inevitable: of course we've got credit cards, video games, MRIs and IVF, because they're so seemingly obvious they've ceased to be remarkable. But in some cases, the ideas didn't even enter anybody's head until some imaginative person with a pen said "Hey, how about this?" None of what we've got today was ever a sure bet.

So here are 10 instances where science fiction turned into a reality. Be prepared to look at submarines, TiVo, and anti-depressants in a whole new light.

Neuromancer is a modern science fiction classic for the excellent reasons that it's a) really good and b) weirdly accurate. The twisted tale of a computer-hacking underworld predicts the advent of data-stealing as a hacker signature (and the Edward Snowden and Wikileaks debacles), and also has a variant on Google Glass, which the delighted Gibson actually got to try for the first time at a public signing last year.

Philip K. Dick's children's book is mostly an adventure about cats, clones, and uncooperative aliens on the Earth colony Plowman's Planet, but it also contains a large, plastic-ish alien who can "print" a copy of anything presented to it. For Dick, who wrote the book that was made into dystopian sci-fi classic Blade Runner , this was child's play, but reading it now is discombobulating.

Yes, you read that date correctly. Margaret Cavendish, a thoroughly remarkable English aristocrat and eccentric, was one of the first science fiction writers in history, and her book The Blazing World, about a utopian kingdom full of bizarre creatures, is a landmark of the genre. It features submarines towed by fish-men, some two hundred years before any effective submarine was actually made.

An enormously popular book of its time, the American Bellamy's fictionalized future set in the year 2000 was largely utopian, but in one respect it was incredibly accurate: it predicted the existence of credit cards. In Bellamy's 2000, however, every citizen is given an equal amount of credit. So ... that part didn't pan out.

Hugo Gernsback is the man for whom the science fiction awards the Hugos are named. His novel from 1911 is stunningly prescient, producing the first ever description of radar and predicting everything from solar energy to the video phone call, and even artificial clothing material. (The plot, in case you're wondering, is silly.)

Bradbury's dystopian future in which books are banned featured one aspect that came true — not the main one, luckily. His main characters wear "seashells" and "thimble radios" embedded in their ears, which in the 1950s must have seemed like an impossible boon — but then Steve Jobs got hold of it and Apple's earbuds took over the world.

Unfortunately, some science fiction predictions aren't entirely wholesome. H.G. Wells predicted the rise of the nuclear age in his apocalyptic novel after spending a long period researching the discoveries of scientists like Ernest Rutherford, so it wasn't a shot in the dark. The novel might have actually influenced the development of the atomic bomb itself, because Leo Szilard, the Hungarian scientist who invented the bomb, read it shortly before discovering nuclear chain reactions in 1933.

Fortunately, many of Huxley's predictions in his darkly dystopian novel haven't come true: we don't torture small children, divide people into castes, or (completely) regard the idea of spending time alone as horrific. But the hallucinogenic drug soma, designed to keep people happy and in states of ecstasy, is a far more powerful forebear to the idea of SSRIs and other mood-enhancing drugs.

Stand On Zanzibar is regarded as one of the most accurate science fiction novels of all time. Set in 2010, it predicts everything from Detroit's collapse (because of electric cars, rather than a recession) to the existence of the European Union, overpopulation, inflight entertainment on planes, Viagra, terrorism, the rise of China, and TiVo. It even has America ruled by a President named Obomi. That's just eerie.

Arthur C. Clarke's classic is now better known in its Stanley Kubrick-directed film version, but it contains some interesting predictions, including the idea of communication satellites in orbit around the earth and a device called a "Newspad," similar to today's tablets, on which the citizens read the news.