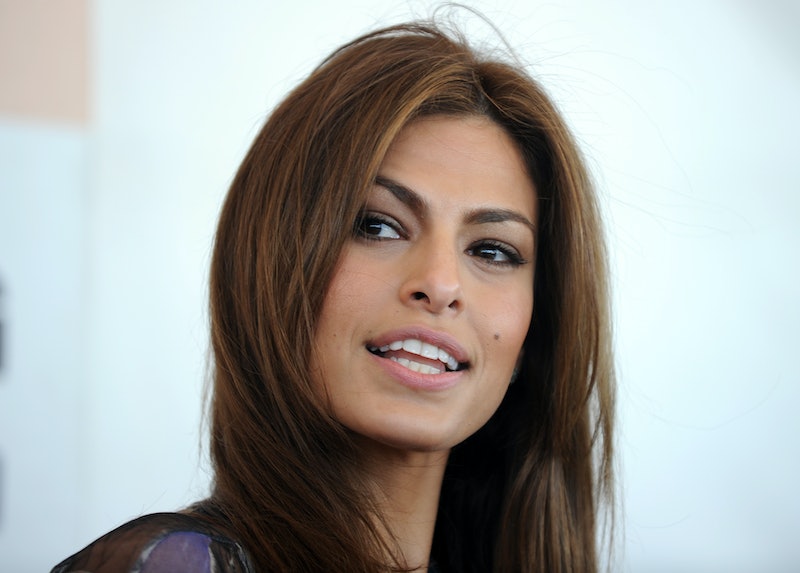 There's private, there's notoriously private, and then there's Eva Mendes. The actress' reticence about her personal life and recent child with everybody's boyfriend Ryan Gosling is a throwback to Old Hollywood. Which is why the little-known interview she did with British ex-It Girl Amanda de Cadenet for the now-online series The Conversation in 2012 is so startling. Everything (almost) was on the table: money, self-esteem, stress, guilt, failure, religion. The normal celebrity interview tropes of what-are-you-wearing and what-products-do-you-use were left behind in favor of spitting some truth. And guess what? Mendes is an epic straight-shooter, and she has no interest in Hollywood constructions of feminine weakness.

So why am I talking about this now? The Conversation as a Web series has flown largely under the radar for reasons I simply can't fathom. On the series, de Cadenet has had some of the biggest names in show business — Zoe Saldana, Gwyneth Paltrow, Olivia Wilde — on her couch, talking as openly and intimately as they would to a therapist. For that reason alone it deserves to be better-known, and not just for fans of actresses in general: it's overtly, clearly feminist. It clearly takes grit, self-belief, and personal awareness to make it out of the blender of Hollywood alive, and we're getting a peek at just how savvy these women are, and how they manage their finances and emotional health.

I combed the interview for the five best bits of life advice Mendes shares, from money to guilt, and no, none of them are about how to land a Gosling. (Also, side note: As a child, she planned on being a nun — until she found out they didn't get paid. Awesome.)

On Knowing How To Be Self-Sufficient

What Mendes says: "Of course men are wonderful, and let's use them as much as possible to meet our needs, but at the end of the day, I want to know how to change a tire. I want to be self-sufficient."

Why I love this: Women are often informed, subliminally or overtly, that practical, dirty jobs are beyond their skill set. But there's been a movement to teach girls the basics of home DIY, car care, and other life skills purely as a matter of course, so they don't have to rely on anybody.

On How To Invest Your Money

What Mendes says: "Smart choices: starting businesses. I have a few businesses that I keep quiet, and real estate. I love meeting with people that think outside the box, business-wise, and seeing how I can stick my little paws in."

Why I love this: Money is usually a dirty word in acting — it's supposed to be all about the art — but Mendes is breaking that taboo, and with good reason. There's such a massive imbalance in the amount of women investing in stocks and shares that it's called "the female financial paradox." Her openness is jump-starting that conversation.

What Mendes says: "I've gotten to a place now where every day, I do something that's out of my comfort zone. It doesn't matter what it may be. It could be the tiniest thing, it could be anything — it could be staying on the treadmill for an extra 10 minutes when that little voice is saying you've done enough, you've done your 35 minutes.... Whenever that little voice comes up for me, and I defy it, it means I'm out of my comfort zone and I'm growing."

Why I love this: Recent studies, and accounts from women at the top of their fields, show that pushing boundaries outside your comfort zone are essential to success. It's a good life lesson in whatever job you do.

On Asking Questions About Your Finances

Why I love this: There is a huge gap in financial literacy between women and men, from our confidence in investments to our understanding of retirement funds. Hearing a successful woman talk openly about how she learned about money is an unusual eye-opener.

What Mendes says: "I struggle with guilt. That dirty, dirty word. So the way I eliminate that guilt is knowing that when I'm at my best, that's when I can really be of service to other people."

Why we love this: In a study that will shock basically no woman ever, it turns out that the female part of the population feels proportionally more guilt than males, particularly older women. Conquering guilt — about work-life balance, motherhood, relationships, success, you name it — is a huge part of modern womanhood. Kudos to Mendes for saying "that dirty word" out loud.

Watch the full episode of The Conversation below.

More like this
Beyoncé & Madonna’s “Break My Soul” Remix Honors A Group Of Black Icons
By Stephanie Topacio Long
What Is Megan Thee Stallion’s Net Worth? The Traumazine Hitmaker Isn’t Worried About A Budget
By Hugh McIntyre
Gemma Collins' Net Worth Is Only Going Up
By Catharina Cheung
22 Movies On Netflix That Are Perfect For The Whole Family
By Bustle Editors
Get Even More From Bustle — Sign Up For The Newsletter