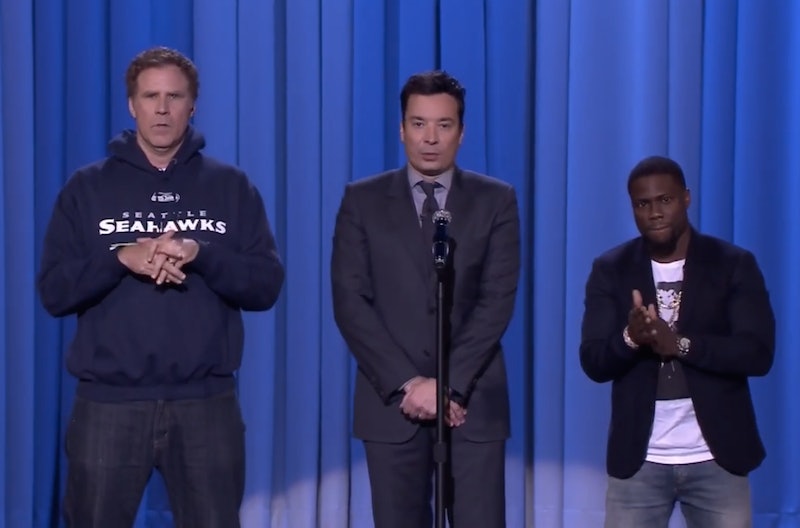 I swear, The Tonight Show is the gift that keeps on giving. If you're not in love with Jimmy Fallon already, then prepare to fall in love with him for the first time thanks to the lip sync battle between Will Ferrell and Kevin Hart that Fallon staged on The Tonight Show on Sunday — the 13 minute long lip sync battle. Of course, Fallon participated as well, hence why the whole thing was 13 minutes, but not only were the clips of the songs longer than usual, but everyone seemed to be trying their hardest to out-ham each other as far as their performances went. They made the mistake of letting drumming king Will Ferrell go first, and he set a bar that Fallon and Hart not only had to meet but that they met with aplomb.

The songs ranged from "All Of Me" to "Let It Go," but no matter what was being sung you could rest assured that the entire battle was worth sticking around for from start to finish. Then again, that number 13 can be a bit daunting when you've got other things to do with your day, so you might need a little persuasion. Here are 13 highlights from the Lip Sync battle that will make you want to turn it on right now and then never turn it off.

1. When Will Ferrell Crawled to Beyoncé

2. When Kevin Hart Started Dancing With Him

3. When Jimmy Fallon Had His Own Props

4. No, Seriously, He Went In On The Props

5. When Kevin Hart Sang To His True Love

6. And Then Started Taking Off His Clothes

7. When Will Ferrell Copied Elsa's Swag

8. Where Did The Glitter Come From?

9. When Jimmy Fallon Had A Surprise Guest

10. And Ruined His Pants

11. When A Performance Was So Beautiful Will Ferrell Cried

12. When Jimmy Fallon Had To Lower The Mic For Kevin Hart

13. When Will Ferrell Got A Little Too Into This