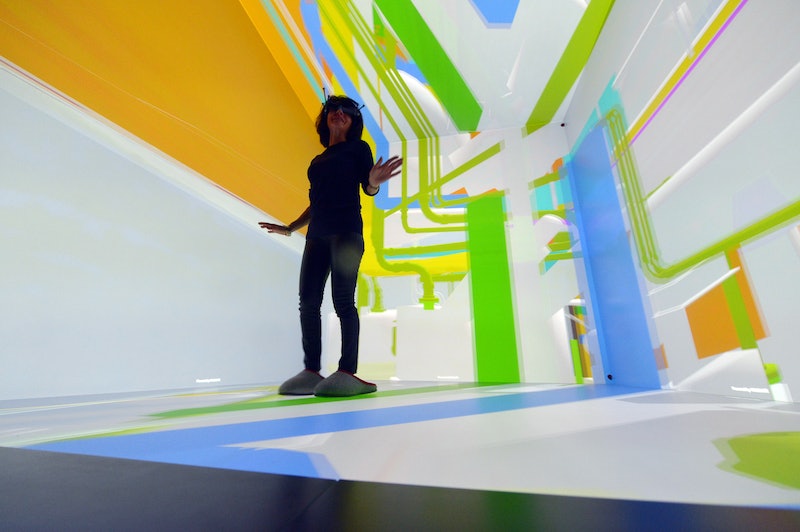 Girls and young women are told, over and over again, to take preemptive steps against sexual harassment and assault: Don't walk alone at night. Keep your keys out. Not to mention the always cringe-worthy: don't dress like you're "asking for it." Now, however, there may be a new type of sexual harassment training for young women that's incredibly beneficial in the long run.

Researchers at Southern Methodist University found that virtual reality resistance training — similar to what soldiers use to practice fighting — better prepares young women for dealing with non-consensual sexual advances. This training system, called "My Voice, My Choice," places participants in simulated situations of sexual harassment, forcing the participants to learn how to reject unwanted sexual advances that ranged from mild pressuring to verbal and physical coercion.

Lorelei Simpson Rowe, an associate professor and graduate program co-director in the SMU Psychology department, said in a statement:

The virtual simulations allowed girls to practice being assertive in a realistic environment. The intent of the program is for the learning opportunity to increase the likelihood that they will use the skills in real life. Research has shown that skills are more likely to generalize if they are practiced in a realistic environment, so we used virtual reality to increase the realism.

Considering that about 25 to 50 percent of American women experience sexual violence by the time they reach their early 20s, according to research from the Department of Justice, the impact of "My Voice, My Choice" could be huge.

So, here's how "My Voice, My Choice" works: The software, designed by study co-authors Ernest N. Jouriles and Renee McDonald in collaboration with SMU's video game department, places the young women in a bedroom with a male avatar. The participants wear virtual reality goggles as they interact with the male avatar one-on-one for about three minutes.

The male avatar tries to coerce the participants using a variety of tactics, beginning with slight yet insistent pressure. The situation is then amplified with more aggressive speech, and the male avatar becomes more resistant to each rejection.

It sounds intense, but researchers believe placing young women in this virtual reality teaches them how to firmly stand up and say "no," even in the face of resistance. After three months of follow-up surveys, just 10 percent of the study's participants reported that they experienced sexual victimization. While the training program did not reduce physical victimization among young women, researchers found that psychological victimization was significantly minimized — which means the young women also endured less psychological stress and improved mental health.

The training program also had a great effect on young women who were previously victims of psychological violence. Simpson Rowe called that result "particularly noteworthy" because past violence prevention programs "have generally been ineffective or less effective for previously victimized young women," she said.

The feedback from the 78 participants — all of whom were teenage girls — was also positive. "Once they went through the training they told us it was so valuable they’d recommend it for everyone," Simpson Rowe said.

However, the SMU researchers caution that more research is needed, as this study's sample size was very small. Still, it seems like virtual reality training could be a groundbreaking to teach young women about consent and how to hold their ground in the face of resistance.