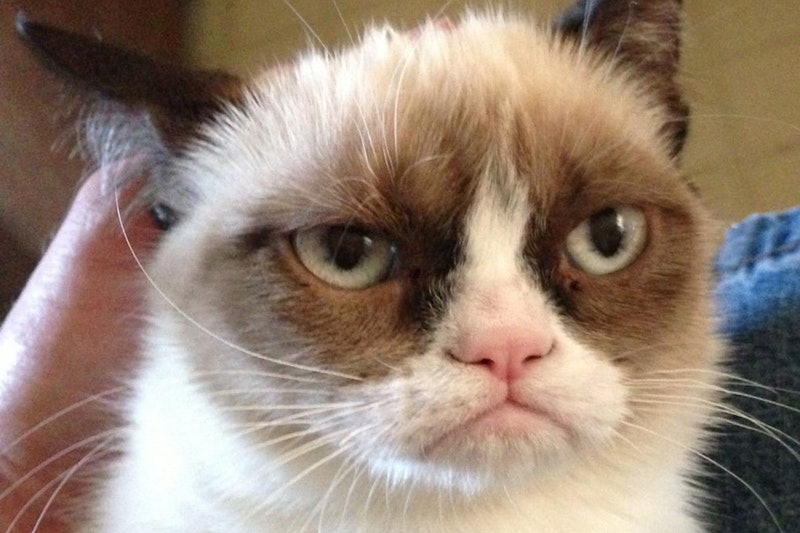 If you've ever thought that getting Botox to hide signs of aging was a bit much, then you won't believe the extremes one woman is going to in order to keep a youthful appearance. UK woman Tess Christian doesn't smile or laugh so she doesn't get wrinkles, and she has been actively doing this for the past 40 years. 40 years! I can't even keep a straight face for 40 seconds, so I really don't know how this woman did it.

Although now she purely suppresses her smile for vanity purposes, Tess says it didn't start out that way (thank God, because if you're 10 years old and already concerned with your face showing signs of aging, something is seriously wrong). She picked up the habit in Catholic school, where she says the strict nuns were always telling the children to "wipe that smile off your face." By the time she reached adulthood, she came to the conclusion that a somber expression suited her face, citing old Hollywood glamour icons like Marlene Dietrich for inspiration. I mean, on the one hand, do you. But on the other hand I would like to point out that my grandma Shirley, who grew up during the days of old Hollywood glamour, never smiled in pictures either and she always looked pretty ridiculous in group photos because she was the only one who didn't crack a smile. But like I said, do you.

Now when I say Tess Christian doesn't smile, I don't mean that she has a case of resting bitch face. I mean, she was seriously dedicated to not cracking that stony exterior. She didn't even smile at her wedding or after the birth of her daughter. Which makes me wonder: is it really worth it? Is a wrinkle-free face really worth looking bored at your own wedding photos? Would breaking her rule those two times really have wreaked such havoc on her cheeks?

And, more importantly, does refraining from smiling actually work? Tess says it does, and I can't lie, her face does look pretty youthful (check out her photos at The Daily Mail). Some experts back her up. Dermatologist Nick Lowe tells the Mail, "It can be an effective anti-aging technique."

You guys, is this why Captain Holt's face looks so smooth???

It might be, but it might not. Boston dermatologist Ranella Hirsch told Good Housekeeping that "smile lines are the result of age-related collagen loss, which causes cheeks to lose elasticity and sag, producing the telltale folds." She does admit, though, "But repeated muscle movements exaggerate them." Furthermore, TIME said that although you see folds every time you smile, and as you get older they don't go away when you stop smiling, the real culprit is not your smile, but your skin's diminishing elasticity.

I guess it makes sense: since your skin can't bounce back from folds as you get older, if you just stop smiling, you won't create the folds in the first place.

Still, the question remains: is it worth it? I'm standing by my original verdict of "No." Smiling doesn't just help you look good in pictures, there are also real health benefits to doing it. Various studies have shown that smiling reduces stress, releases endorphins (which make you happy), and can improve the moods of people around you (like how you heard smiling is contagious? It's true).

What's more, TIME points out, is that people who are electing not to smile as a way to avoid getting wrinkles might be ignoring the most common cause of wrinkles: over-exposure to the sun. So how about instead of trying to keep a straight face all the time, we just put sunscreen on our faces every day (yes, even when it's cloudy out), mmkay?