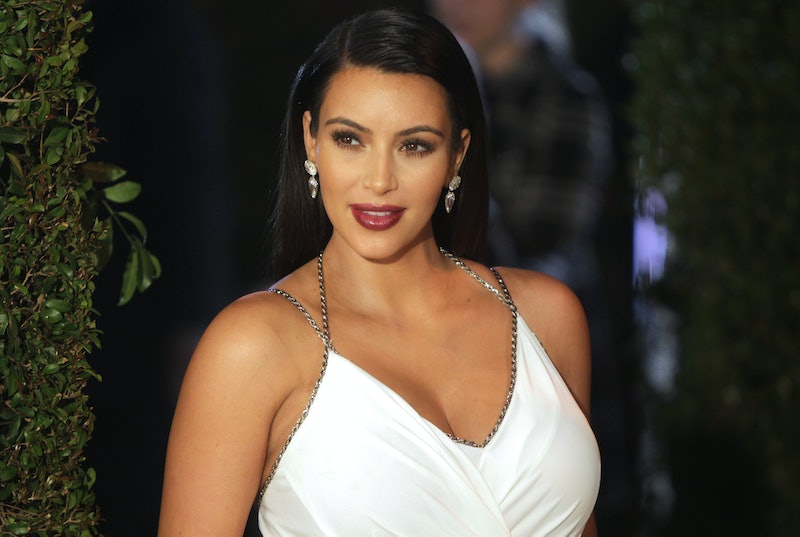 You know how doctors and health-obsessed people sometimes say, "Be in touch with your body. Know your body"? Well, it's safe to say that Kim Kardashian has mastered such advice on a level that is hardly fathomable to the rest of us. The woman knows her brand, and she knows her butt — and she knows that many times, those two things are one and the same. So when her Paper Magazine photo shoot broke the Internet, I don't think that many of us were really even surprised, despite our fascination with the whole thing. But get ready to go through it all again, guys, because a new photo from LOVE magazine featuring Kim Kardashian's bare butt has reportedly been leaked.

Although nothing has been officially confirmed yet, the VERY bold photo features Kardashian with bleached eyebrows (which, for some, is indication that it's actually her), bent over, and smoking a cigarette. Yes, there's a lot going on there. The photo has since been deleted from Twitter, but this is the Internet we're talking about, guys, and oh — it will be back.

The photo itself appears to be a photo of someone holding the magazine itself, which distorts the image, making it look even less like Kardashian to begin with and, to be honest, is just a little bit shocking. Let's just say that it makes you do a double take for a few reasons. The full 30-page spread will appear in LOVE's February issue, out Feb. 9. So if this new photo doesn't break the Internet again, just wait a week or so.