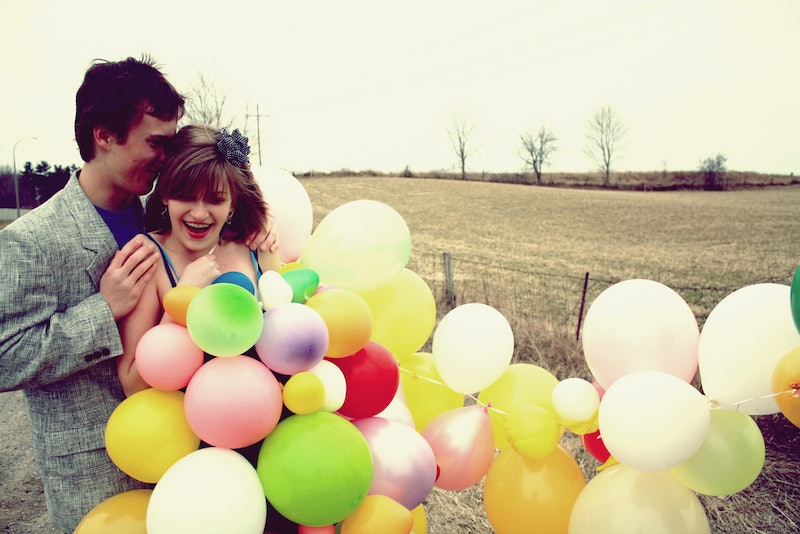 Navigating co-existence in the form of a romantic relationship can be difficult. Obviously, there are things you should be willing to give up or change about yourself. For instance, if you're asked to quit smoking, you should do it. You should do that anyway and being able to make someone you love happy at the same time you're making yourself healthier is a winning situation all around. You should strive to be a more patient person and a better communicator. Generally, when you're dating, if changing/adapting/expanding part of your personality makes you harder, better, stronger, faster, then that's a good thing. However (biggest "however" in the world!), if you find yourself changing in ways that detract from your happiness, put you are risk of losing your identity, or alienate you from the things and people you care about, then you've got to reevaluate whether or not you're giving up too much for someone else—and whether or not this relationship is a positive, self-affirming, healthy thing for you to be in at all.

Most importantly, you don't want to be dating anyone that makes unreasonable demands about how you should alter yourself to suit the relationship. Again, there are reasonable requests. Please don't have sex with other people (unless that's something you guys are down with). Please think about me when you're making decisions. Please don't call me names when we're fighting. But then there are unreasonable requests too, and in order to be in a happy relationship, you have to be able to distinguish the two from each other. It's also important to be aware that changing yourself isn't always a request from someone else; sometimes it's something you do because you think it will make you more desirable or more like the person you're dating. Which is why it's important to remember that the person you're dating is dating you/should be dating you specifically because you are YOU and not because you are some magical notion either they or you have dreamed up. So here are 11 things you should never change for someone you're dating.

1. Your threshold for poor treatment

If you have standards of how you want to be treated by other people, don't lessen them because the person you're dating isn't living up to them. There's nothing wrong with the standard you set; the problem comes if the person you're with isn't willing to meet those standards. How you ask other people to treat you isn't up for compromise. I mean, unless you standards for treatment in a relationship include hour-long foot rubs and magic carpet rides every night promptly at 7, in which case you might want to re-evaluate your priorities just a little bit. But if you have realistic expectations about being treated with respect, you shouldn't budge on that just because the person you like happens to treat you poorly. You can always find someone who will treat you the way you want to be treated, so don't settle for less.

2. Your future goals and dreams

If you're in a serious relationship, it's generally advisable to be willing to work together, and compromise if necessary, when it comes to planning the future. The future is mysterious and unknowable and anything could happen and you need to always be ready to roll with the punches. Maybe that means you'll end up needing to move to a new city to accommodate someone's job, or maybe you'll have to drive a car you think is ugly, or maybe you'll have to pretend to be nice to a mother you don't really like. It doesn't mean you should give up the big stuff. For instance, if you dream of having a family and children, or a certain career, or if you want to spend time traveling, you should never let go of those big, life-changing aspirations because someone else doesn't share them. As above, you can just find someone who shares similar priorities.

Respectful (even if they're heated) debates between two people in a relationship, and having differing opinions on some things can be really wonderful, as long as both people are okay with not seeing eye-to-eye on everything, and are able to engage in debate respectfully and without attachment to changing the other person's views. You should never, ever change your core values because the person you're dating has different ones. It's okay if you lean left and they lean right. It can even be healthy for conversation, in terms of challenging one another, and giving each other a broader perspective on things. The only time you should change this kind of stuff is if you're a terrible racist or a homophobe or a sexist and the person you're dating makes you realize some kind of latent bigotry you've been carrying around is wrong. Otherwise, carry on with what you're passionate about, and enjoy the fact that sometimes having differences is more important than being someone's doormat.

Unless you have an actually abusive or genuinely mean friend, or someone who steals from you, or who killed your dog on purpose or something equally egregious, you should never change your friends for the person you're dating. It's okay if your significant other doesn't like one of your friends. They don't need to hang out—they're your friend. You chose them and you love them and when/if things go sour with your SO (or even if you just need to go hang out with someone else for a bit), your friend is the one who is going to be there. If someone ever asks you to give up a friend with no good reason, just because they don't really like them, then you need to think about why you're in that relationship to begin with. The person you're dating should want you to be happy, and your friends are one element in that happiness, and you should always maintain your friendships, even when you're in love.

5. Your relationship with your family

Non-negotiable. If your family and SO don't get along, bad luck to them both. If you get along with both parties, that's all that matters. However, if the person you're dating can't get it together to even pretend to like your family, or at the very least be polite to them, it's probably time to get out. Being in a relationship with someone who is selfish and dramatic about their relationship to your loved ones is the kind of lifelong drama you really don't want to sign up for.

6. The way you feel about yourself

If you love yourself, and find yourself loving yourself less so with the person you're dating, then there's a big problem, especially if they're specifically doing and telling you things that change your perception about yourself. No one should ever intentionally bring you down, nor should they neglect to make changes to correct the problem if they're accidentally bringing you down. The whole point of being with another person is to improve your life—you should never be content with feeling less than confident about yourself when you're dating someone.

Don't give up your career for someone. Just...don't. You don't know the future. You don't know if they're going to be there down the road. But you are going to be there, and if you start giving up work-related things for your relationship, you might find yourself completely off track in your career, questioning yourself and your direction, not to mention being loaded with a bevy of regrets if the relationship ends. Bottom line: a good relationship would never require you to sacrifice your career. If being with someone, for whatever reason, seems to necessitate your giving up your professional agenda, then that definitively means that's not the right relationship for you.

When you're dating someone, it's always fun to learn about the things they like. Not only is it an incredibly useful way to get to know them, but it's possibly a channel to discovering new things you could like too. You should always be interested in and open to the likes of your significant other, and they should feel the same about your likes. That's called being supportive, and you should totally do it. But this doesn't mean you should stop liking the things you like to satisfy the person you're dating, or just because the person you're dating doesn't feel the same way about the things you like as you do. Never stop listening to Katy Perry for anyone, is basically what I mean.

Given how many years most of us spend learning how to be self-reliant, the last thing you want to do is tear down all that hard work and let yourself become totally dependent on the person you're dating. It's never a good idea let yourself be totally consumed by someone else. A relationship is an equal partnership, it's two whole people coming together to create a little world, not one person being sucked wholly into the vortex of someone else's life. A partnership doesn't mean turning into a blobby, hybrid person incapable of existing on your own.

10. The things you're looking for from a relationship

The most important thing to never change is your sense of self. You are a whole person all on your own, and you should never change to become less than you are for anyone. You should always be your shining, crazy, weird, normal, loud, quiet, smart, silly, pretty, ugly self. Whatever it is that you are, you should always be that, and you should have a firm grasp on it. At the end of the day, it's having a strong sense of self that will make you truly happy—and no relationship will ever be able to fill the void that's left when you've lost yourself.