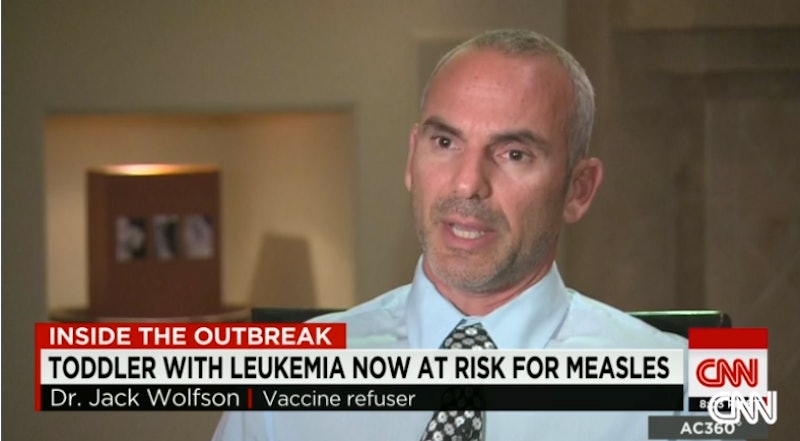 Anti-vaxxers are a strange bunch, routinely referencing discredited studies to back up their belief that vaccines are ultimately detrimental. But someday in the future, humankind will look back on this measles outbreak and write it off as the fallacy of a group of people who believed in erroneous theories — a misconception so dangerous that it has put countless of children's lives at risk. Amid the outbreak of measles, leading the anti-vaccination pack is Dr. Jack Wolfson, an Arizona cardiologist who has become a figure of controversy in the vaccine debate.

As a vaccine refuser in the medical profession, Wolfson has gained notoriety as well as praise from the anti-vaxxers camp for his stance. Despite more than 100 people having been affected by the measles outbreak in the worst epidemic in 20 years and the Centers for Disease Control and Prevention (CDC) urging parents to vaccinate their children, Wolfson has emerged as the single most vocal anti-vaccination "expert," having spoken up against vaccines, encouraging a change in diet instead:

We should be getting measles, mumps, rubella, chicken pox, these are the rights of our children to get it. We do not need to inject chemicals into ourselves and into our children in order to boost our immune system... I'm a big fan of what's called paleo-nutrition, so our children eat foods that our ancestors have been eating for millions of years. That's the best way to protect.

Wolfson said he came around to his strongly-held opinion about vaccines after meeting his wife, a chiropractor, whom he told The Washington Post "opened his eyes" about vaccines. Now, having embraced "natural and holistic" medicine, Wolfson is staunchly against vaccines.

But the result of skipping vaccination means that not only are you susceptible to diseases, you also put others at risk. Dr. Tim Jacks, the father of two young children, wrote an op-ed expressing his fury at the anti-vaccination movement. His 10-month-old son, Eli, too young for a vaccine, and his daughter Maggie, who at three-years-old, is undergoing chemotherapy for her leukemia and cannot receive vaccines, were exposed to measles by a patient at the same hospital they were at, and Jacks wrote of his frustration and anger at the anti-vaccination movement that brought about the measles epidemic.

Cases like that aren't few and far between. Many people, particularly children, cannot be vaccinated due to age, allergies, weak immune systems, and cancer treatments — these are the ones that anti-vaxxers put most at risk.

Wolfson, when contacted by CNN to respond to the Jacks' predicament, displayed a disturbing lack of concern for how anti-vaxxers affect the communities they live in. With astounding ignorance, he said:

It's not my responsibility to inject my child with chemicals in order for [a child like Maggie] to be supposedly healthy. As far as I'm concerned, it's very likely that her leukemia is from vaccinations in the first place.

I'm not going to sacrifice the well-being of my child. My child is pure. It's not my responsibility to be protecting their child.

But aside from shirking his social responsibility, Wolfson — again, contrary to the CDC's findings — doesn't think measles is that big a deal. He told The Washington Post:

This quote-unquote "outbreak" has infected 70 people who are quote-unquote "infected.” This is a country of 300 million people, and no one has died, and no one is sick as far as I know. We are all worried, and we are all getting crazy, and what we’re talking about is really just a fever and a rash.