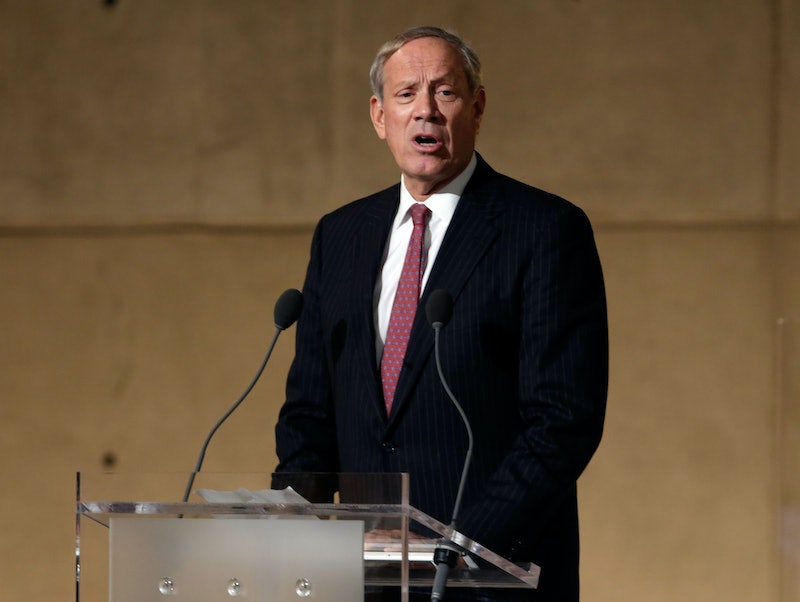 The political rumor mill is swirling with which Republican politician will go from "seriously considering" running to a definitive presidential bid, and now there's another name to add to the list: former New York Governor George Pataki is "seriously" exploring a 2016 Republican presidential bid, he said in an interview with Fox News on Monday.

Coming days after Mitt Romney declared that he was not running after all, Pataki's announcement is another surprise for those following the run-up to the Republican presidential primary. He told the right-leaning network of his plans to travel to New Hampshire on Tuesday to meet with political bigwigs and citizens, as well as to "lay out my ideas" for the nation in what could be seen as the stirrings of a campaign. When asked if he thought of running, Pataki said:

I'm thinking about it very seriously.

Serving as governor from 1995 to 2006, Pataki was a major figure in the GOP establishment, hailed as a fiscal conservative who managed to become governor of a traditionally blue state. But Pataki also angered conservative supporters with his support for gun control (signing into law the country's strictest gun control law at the time), gay rights (though he opposes same-sex marriage), and abortion rights — social issues on which he stands in opposition of most GOP members, and could ultimately prove to be detrimental to a Republican presidential bid.

If his name doesn't strike you as familiar at all, not to worry. Following the end of his governorship of New York in 2006, Pataki went into the private sector as a businessman and attorney, and as chairman of a group called Revere America in 2010, he traveled around the country lobbying against Obamacare. In fact, Pataki's absence from the political scene has been so complete that he himself acknowledged the possibility that people might not remember him:

If I, as I expect, do choose to run, I think the fact that I have had this time away from government, away from politics, is a positive. It does make it harder to run, because people don’t remember who I am, but we can remind them of it.

Pataki has toyed with the idea of a presidential run before in both 2008 and 2012, though no solid bid ever materialized. In recent months, the 69-year-old has set out to re-establish his political profile, calling for smaller government and speaking out on NYC Mayor Bill de Blasio's handling of the murder of two NYPD cops in Brooklyn in December.