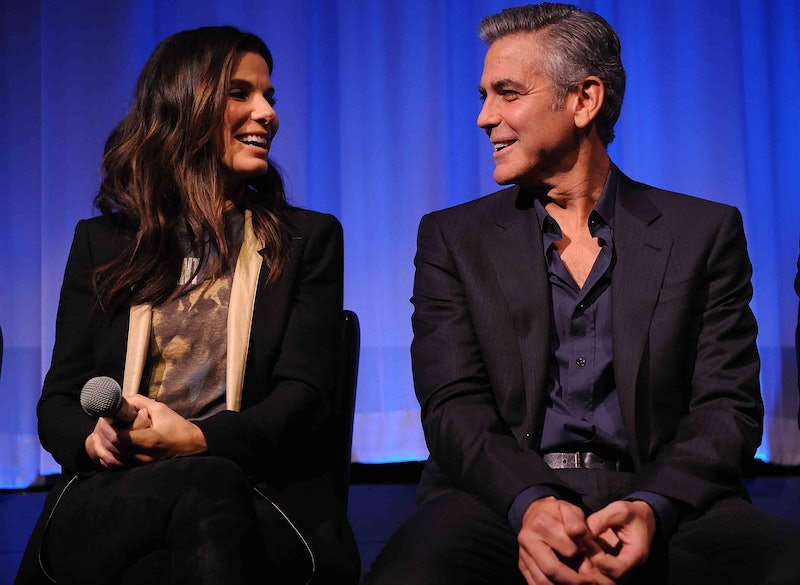 Gravity is already getting rave reviews, despite some charges that its starry, boundless setting makes some viewers a little nauseous. Obviously, a great deal of credit goes to director Alfonso Cuarón, but let us not forget the magnitude of the two Hollywood stars at the center of this project: Sandra Bullock and George Clooney. These two are so gosh darn lovable that we’d probably sit through five hours on the Tilt-a-whirl if they did it with us. And since the duo has started promoting Gravity, they’ve got us all chattering about how these two perfect humans can get along so well without getting together. Could Sandra be the one to change George’s mind about settling down? Oh, yes please! Let that be how things work! We would get so much jealousy/vicarious living mileage out of that relationship. Keep dreaming, everyone.

The actors maintain they’re not dating and that’s probably for the best. That much charm in one couple might be so perfect, it wraps back around to terrible. But where’s there’s not love, we’ll make (GIF) war. Which one of these charmers is the more dangerous one? Only little, moving pictures can tell us.

FIRST UP: MEET THE CONTENDERS

Sandy Bullock says hello. You may have heard Mindy Kaling screaming her name while drunkenly escaping her ex-boyfriend’s wedding once on The Mindy Project. She is a rom-com queen, and the reason we’re okay with looking like fools on occasion.

Meet George. You may have heard his name being breathily uttered during a conversation about sexual fantasies on Sex and the City. He’s also a great actor and a political activist, but you’ve probably already moved onto this GIF of him nuzzling Amy Poehler.

NOW, LET’S TAKE A MOMENT TO LAUGH TOGETHER

Sandra’s just goofing around on set, making people giggle, because she’s the best.

And George just finds himself laughing all the time, especially around his BFF Brad.

TIME TO MAKE YOU SWOON

Sandra Bullock wants to marry you. And she’s doing the asking because screw social “norms,” whatever that means.

George isn’t ready for marriage – and let’s face it, he probably never will be – but where there’s no ring, there’s still intoxicating pillow talk, right?

DID YOU KNOW CHARM GROWS EXPONENTIALLY WHEN BADASSERY IS ADDED TO THE MIX?

George has got it.

Sandra’s such a confident lady, she doesn’t need a fancy ‘do to feel alright.

And here’s what George thinks of your opinion of him with long, brown hair:

SILLY FACES ON NATIONAL TELEVISION? SURE, WHY NOT?

Okay, George probably knew he was being cute when he made this “unflattering” face. But it worked so he’s still in the game.

HAMMING IT UP ON A REGULAR BASIS

Sandra’s so committed that this isn’t even the first time she’s fallen on her face for a laugh.

Okay, how the heck does he still look handsome when he’s being cheesy? No fair, George Clooney. No fair.

I can’t choose. How could anyone choose? You know what? How about this: They both win, because when they’re involved everyone wins.