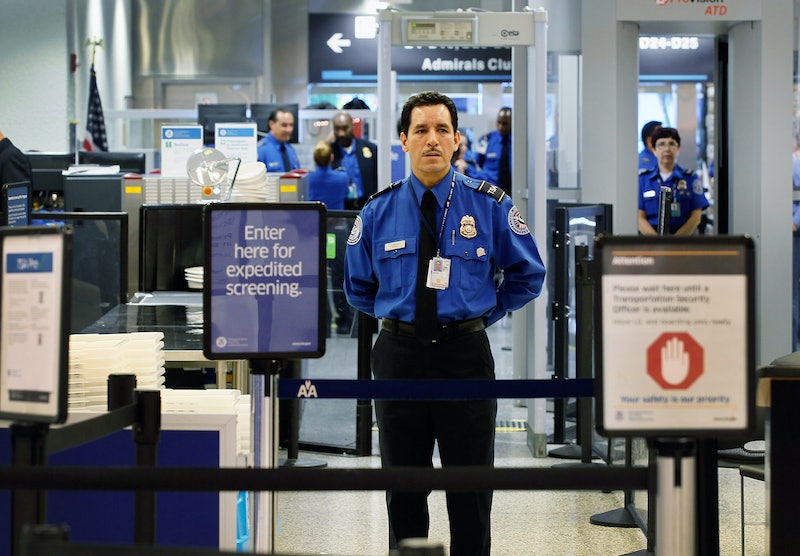 I never thought I’d say this, but thank goodness for the Transportation Security Administration, better known as the TSA. After reading a blog post about the firearms and weapons the TSA confiscated in 2014, I have to be a little bit thankful for them, even if they did pat down my hair that one time, made me toss my favorite lotion, and constantly make me remove my shoes. Why? Because last year, TSA confiscated a whopping 2,212 firearms from carry-on bags in 2014.

These numbers are staggering enough without taking a closer look at what the top 10 locations of reveals. Seven of the top 10 airports in which firearms were confiscated were in the South, which, considering all the stereotypes about the South, isn’t really all that surprising. Also not that surprising is that the state with the most amount of confiscated firearms, with a total of 247 firearms, is (drumroll, please) Texas. Everything's truly bigger in Texas.

Considering that the TSA actually allows people to travel with firearms — if they’re unloaded, locked in a hard-sided container, and declared at the check-in counter — I’m not sure why people brought loaded guns in their carry-ons to the airport. According to the TSA's blog post:

2,212 firearms were discovered in carry-on bags at checkpoints across the country, averaging more than six firearms per day. Of those, 1,835 (83 percent) were loaded. Firearms were intercepted at a total of 224 airports; 19 more airports than last year. There was a 22 percent increase in firearm discoveries from last year’s total of 1,813.

Of those 2,212 confiscations, few other interesting facts stand out, including the date June 4. According to the TSA, that day in 2014 currently holds the record of the highest number of firearms confiscated at checkpoints around the country with 18, five more than the record set in 2013. There’s also the case of the man at LaGuardia Airport who tried to enter a checkpoint with a .38 caliber revolver on his belt.

Of course, the TSA isn’t only screening for firearms, so there was an alarming amount of other weapons confiscated by the TSA last year. Too many live and inactive grenades (why?) and knives hidden in very odd places, such as inside a toothpaste container, in a laptop hard drive caddy, in a greeting card, and in an enchilada. Because it’s that’s serious, apparently. And there are so many throwing knives, stars, and swords confiscated that I imagine a lot of people were upset that their Naruto cos-play outfits were ruined. The TSA also mentioned some notable drug busts, such as the 80 pounds of marijuana discovered in a checked bag at McClellan-Palomar Airport and the three pounds of cocaine wrapped in raw meat discovered in a checked bag at San Jose International Airport.

TSA's numbers about the amount of firearms confiscated in the last year made me wonder what’s changing that’s created more attempts to bring firearms on airplanes via carry-ons (or belt loops). There are a number of factors that could be the cause of it.

Kind of. According to Huffington Post, gun sales have declined in 2014, meaning that the “gun boom is over,” but gun sales are still higher than they were four or five years ago. Background checks (the best indicators for gun sales) fell from 8.81 million in 2013 to “just” 6.95 million in 2014. “Just” is necessary because that’s still a large amount of people buying guns.

Without a doubt, airport security changed dramatically after 9/11. But has it made significant changes since then that could lead to the confiscation of more firearms? Obvious changes include removing shoes at checkpoints, scanning laptops separately (which I not can’t complain about after the aforementioned knife in the laptop), removal of outerwear, and body scan machines. Considering some of the, ahem, creative ways people have tried to get weapons in past security checkpoints (an enchilada, really?) I'm going to say TSA's regulations have helped.

But maybe the reason is just as simple as what TSA spokesperson Lisa Farbstein stated in an informative video by TSA:

As mentioned earlier, the TSA doesn’t forbid traveling with firearms, you just can’t bring them loaded on a plane via a carry-on. If you plan on traveling with a firearm, make sure to watch the TSA’s video on how to do so safely.