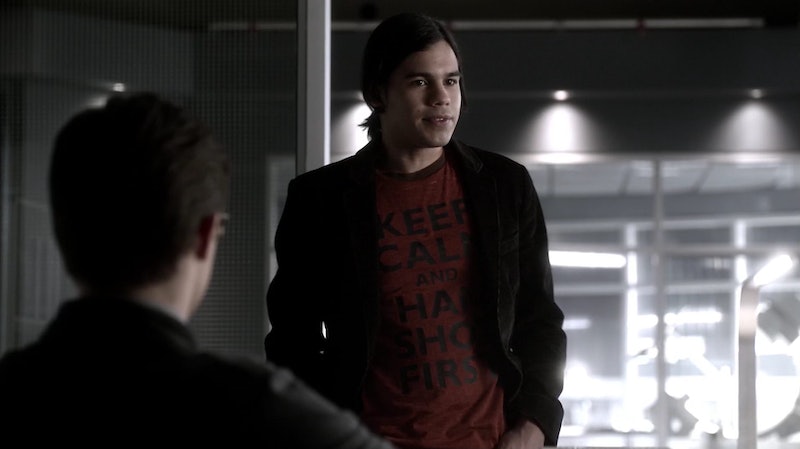 I'm worried about my favorite pun artist, you guys. Could Cisco Ramon become The Flash villain Vibe sooner rather than later? His relationship with Hartley Rathaway has me thinking that the jokester will soon be up to no good. Last week, we learned that they were competitors of sorts at S.T.A.R. Labs for Harrison Wells' appreciation and attention. The future Pied Piper did not appreciate Cisco's casual attitude. The future Vibe, on the other hand, did not appreciate Rathaway's callous and pompous attitude. At the end of the episode, Hartley tried to make a deal with Cisco from inside his S.T.A.R. Labs prison cell. If Cisco let him free, he would tell him where Ronnie Raymond, Caitlin Snow's presumed-dead fiancé and the metahuman known as Firestorm, is hiding. Caitlin is very important to the gifted engineer, and I can see him giving this deal a strong consideration. Will there be repercussions to his choice? (That was a vibration joke — just for you, Cisco!)

Cisco's transformation into Vibe and Caitlin's transformation into Killer Frost have been at the forefront of my speculation about Harrison Wells' motives as well. Is Wells creating villains, or trying to stop them? His manipulation game is strong, that we know. It sure seems likely that he hired Caitlin, Harley, and Cisco at just the right time and placed them in just the right situation to turn them against the world when the time came.

In October, the actor who plays Cisco, Carlos Valdes, was asked about the character's potential transformation in an interview with DC Comics. This is what he revealed.

"I can’t say for sure. That’s kind of up in the air. I think one of the great things about this show is that we have the luxury of being able to figure out where these characters are going and fleshing out their back stories...Our concern is giving life to these characters and giving them an independent storyline before these super powers, so that if and when these personalities are imbued with these powers, it means that much more. It carries a completely different significance because of that back story. So right now, I’m just focusing on exploring Cisco Ramon as a person."

To be honest, that sounds an awful lot like the generic, diplomatic answer we get from a lot of actors with spoilers to hide. Not that he's lying, I'm just not inclined to take his word for it. Maybe I'm still in shock about Wells revealing himself as the "Man In the Yellow Suit."

Here's my theory: I believe that partnering with Hartley is going to force Cisco to face some hard truths about Wells, which will set him on a dark path. What's a Pied Piper without followers, right? It really is amazing that Cisco and Caitlin have stuck around S.T.A.R. Labs and by Wells' side this long after all they've been through and all they've learned. As the saying goes, something's gotta give.

I also think that Vibe will be one of The Flash's characters with technology-based powers. As far as we know, Cisco is not a metahuman, and we haven't seen any evidence that citizens of Central City could have latent abilities from the particle accelerator explosion. I think, if Cisco is going to don a mask, his powers will be self-made. We've already seen his cold gun in action. I bet he could whip up the tech necessary to create vibe's signature booms.