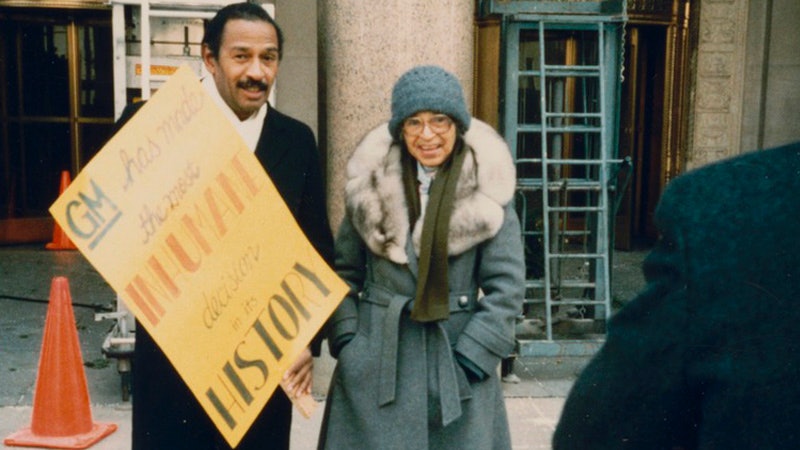 In honor of Black History Month, the Library of Congress is opening up a trove of papers from the Rosa Parks Collection to researchers on Wednesday, Feb. 4, which also marks the storied civil rights activist's birthday (she would have been 102). The collection contains 7,500 manuscripts and 2,500 photographs, including personal letters, family photographs, and letters from presidents and other political figures. The most anticipated papers, however, may be Parks' notes and journal essays from the 1955 Montgomery Bus Boycott, which began nearly 60 years ago when she refused to give her bus seat to a white passenger.

"We know that Mrs. Parks would be proud that the Library of Congress holds her legacy in the high esteem that it deserves, and will make it available to the world to learn from and cherish," Elaine Eason Steele, co-founder of the Rosa & Raymond Parks Institute for Self Development, said on Tuesday in a statement.

The powerful excerpts released from the Rosa Parks Collection this week deliver more insight on the Montgomery Bus Boycott, which was a watershed moment for civil rights in post-war America. In one personal note, Parks describes the system of segregated buses in the heart of the Deep South, writing:

City bus lines. Front section reserved for white passengers. Seating space for 10 persons left vacant for white people, whether or not they board the bus enroute to town. The bus driver often passes colored passengers with these empty seats, when he thinks enough are standing in the aisle. This means a larger number will be waiting for the next bus.

In another excerpt, Parks explains the "strange customs" of the South and Jim Crow laws, writing:

Night time integration and day time segregation makes this a very mixed up place. … It is not easy to remain rational and normal mentally in such a setting where even in our airport in Montgomery there is a white waiting room. ... There are restroom facilities for white ladies and colored women, white men and colored men. We stand outside after being served at the same ticket counter instead of sitting on the inside. ... We board the plane and find no segregation.

Following her arrest in 1955, Parks wrote of her emotional distress and the loneliness she felt, despite becoming one of the faces of the civil rights movement. "There is just so much hurt, disappointment and oppression one can take," she writes. "The bubble of life grows larger."

Another letter, to supporter Jessica Mitford, discusses the instability in Montgomery following Parks' arrest and the swelling civil rights protests in the area. Parks talks about being arrested again, along with a civil rights protest leader, and the publicity the movement was garnering in response. "The wide spread publicity we are getting is most disturbing to the local governing group," she writes.

And just for good measure, here's a photograph of Parks and Congresswoman Shirley Chisholm from 1968. Chisholm was the first African-American woman elected to Congress and ran for the Democratic presidential nomination in 1972.

The public release of these archives coincides with the ongoing exhibition, "The Civil Rights Act of 1964: A Long Struggle for Freedom." Several manuscripts and artifacts from the Rosa Parks Collection will also be on display at the Library of Congress from March 2 through March 30.

"The Rosa Parks Collection is a very important acquisition for the Library of Congress. Mrs. Parks has inspired people worldwide through her contributions to civil rights and her work with children," Helena Zinkham, director of Collections and Services at the Library of Congress, said on Tuesday. "The Library is the ideal steward for her papers, because people will be able to study Parks’ writing and activities alongside the records of many other civil-rights leaders and organizations."