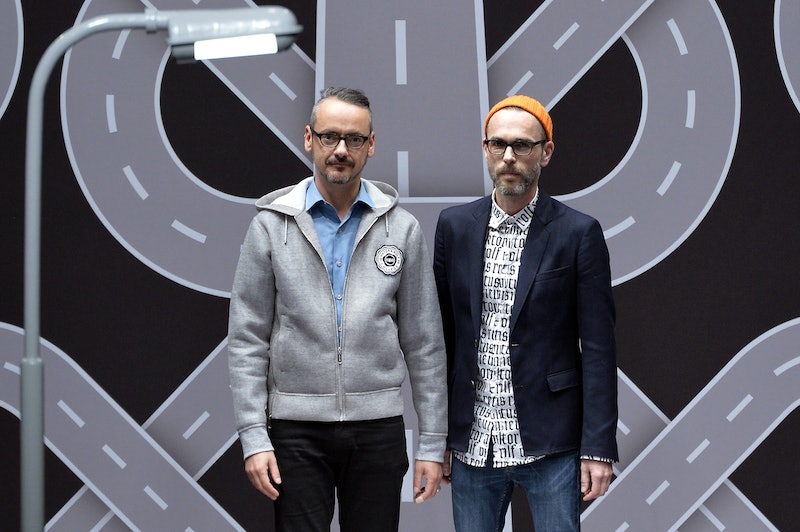 Dutch designers Viktor & Rolf, who created my most favorite Jennifer Lawrence-worn dress ever, (a sleeveless and clingy, sorta cornflower but sorta periwinkle mini frock) have decided to ditch their ready-to-wear, aka manufactured and sold in stores, business. But that doesn't mean they're going anywhere. Jean-Paul Gaultier, who is arguably a more recognized designer in both name and in his actual clothes, did the same last fall in favor of focusing on couture and perfumes. Viktor & Rolf will no longer produce ready-to-wear collections after the fall/winter 2015 season, WWD reports. And, like J-PG, they will narrow their focus on haute couture and fragrance, among other things.

A brief history of Viktor & Rolf: The brand was launched by Viktor Horsting and Rolf Snoeren in 1993. They began offering ready-to-wear in 2000. But they are now shuttering RTW for a simple reason that sounds more artistic than economic, actually. The duo wants to cater to luxury and high-end customers and to traffic in the upper echelon of bespoke fashion.

The Fall/Winter 2015 RTW range will be their last and it likely might arouse increased interest, since it's, you know, final and possibly collectible. They won't be doing a runway show during Paris Fashion Week next month, either. Nail, please meet the beautiful coffin of V&K RTW.

BTW, this is the J. Law dress. Is it not darling, with the swirls and netting?

The pair explained the decision to WWD, saying, "We feel a strong need to refocus on our artistic roots. We have always used fashion to communicate, it is our primary means of artistic expression,” Horsting said. The designers felt that the speed and chaos of the ready-to-wear cycle began to feel "creatively restricting. By letting go of it, we gain more time and freedom."

"We are extremely excited to push the boundaries of our vision in new, unexpected territories,” Snoeren said.

What does all this mean for you, the regular fashion fan or consumer, if anything?

Should it be alarming?

Will this impact your life negatively?

Well, the answer is "no" to all of the above. Unless, of course, you regularly shopped Viktor & Rolf pieces, impulsively blowing your rent in favor of fashion, which isn't always a bad thing, as long as you can make it up.

If you can afford haute couture, as worn by celebs and starlets on red carpets, well, you can celebrate the fact that V&R are tightening their grip on that realm. Or even if you just appreciate haute couture fashion as the high art it is, the forthcoming offerings will certainly appeal to that visual pleasure center in your brain.

Obviously, Viktor & Rolf want to keep their fashion statements, their clothes, and their aesthetics as high-end as possible. The ready-to-wear realm can be breakneck, cutthroat, and, frankly, exhausting, so they are leaving it behind. It sounds as though they want to do one thing really well, as opposed to keeping their hands in too many pots and turning out product that isn't quite up to their personal standards.