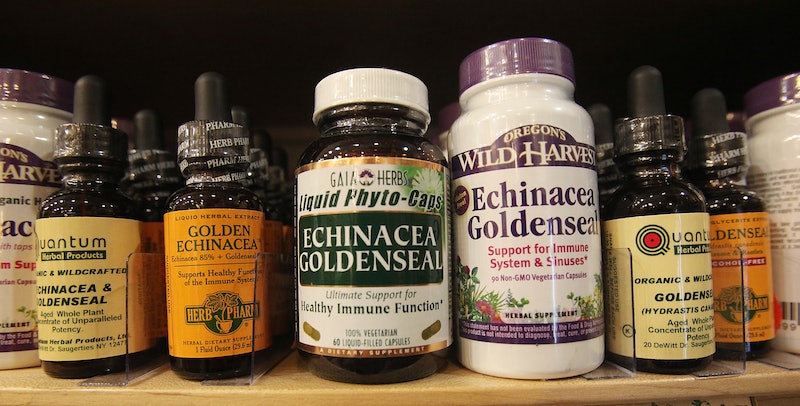 Take a look in your medicine cabinet: how many herbal supplements do you have? Hopefully you haven't gotten too invested in this health trend, since the New York Attorney General is pulling herbal supplements from store shelves. This is based on a study they conducted of the supplements that concluded 80 percent of the herbal supplements sold by major retailers are deceiving and making false claims.

The New York State Attorney General's office study involved testing 78 different top-selling brands of herbal supplements sold by Walmart, GNC, Walgreens, and Target around the state and analyzing the ingredients using DNA barcoding. They found four out of five of the supplements on store shelves not only were using false advertising, but didn't even include the herbs that were listed on the bottles! Many used fillers of a rather stingy variety, which included ingredients like asparagus and powdered rice. One high-selling brand of ginseng pills at Walmart only contained wheat, houseplants (ick!), and radish. Half of the brands that were tested from Target also didn't have any of the ingredients listed on their labels. As we all know from watching Maury, DNA evidence doesn't lie.

The worst part of this is that not only are these herbal supplements selling you lies, but they're doing so at the expense of those with allergies. For example, the ginseng supplement sold at Walmart I previously mentioned said that it was wheat and gluten free, when it in fact contained wheat. So those who take the supplement and have a wheat allergy could get seriously sick and not even know the cause thanks to these hidden ingredients.

It may come as a surprise, considering these results, that herbal supplements haven't really come under fire in this way before, since it seems pretty obvious by the results of the study that these companies are flat out lying. The FDA doesn't oversee these sorts of supplements though and has only ever targeted them on a case-by-case basis, so as a whole they aren't directly regulated by any sort of health authority.

As a result of the investigation, all four of the aforementioned retailers have been sent cease and desist letters from the New York Attorney General that demand they stop selling these products and detail how they test these supplements for quality assurance. According to The New York Times, some of the retailers have already responded: Walgreens agreed to actually stop selling these supplements in all of their stores, not just those in New York State, while Walmart said it would "take appropriate action" and communicate with their suppliers. A spokesperson for GNC said that the retailer would cooperate with the state in "all appropriate ways," while still defending their products, saying they are tested "using validated and widely used testing methods." (Target has yet to respond.)

So the next time you're at looking to pick up some new vitamins, steer clear of the herbal supplements. Also, if you have any lurking around in your house, I would suggest you stop taking them pronto, since you're probably not getting any health benefits from them.

More like this
So You're Having A Medication Abortion
By Dana Smith
For These Abortion Clinic Volunteers, Going TikTok Viral Is A Risk Worth Taking
By Audra Heinrichs
Is The Insta-Famous Always Pan Actually Worth It?
By Jessica Goodman
This TikTok Hard Seltzer Hack Involves A Milk Frother
By Alexis Morillo
Get Even More From Bustle — Sign Up For The Newsletter