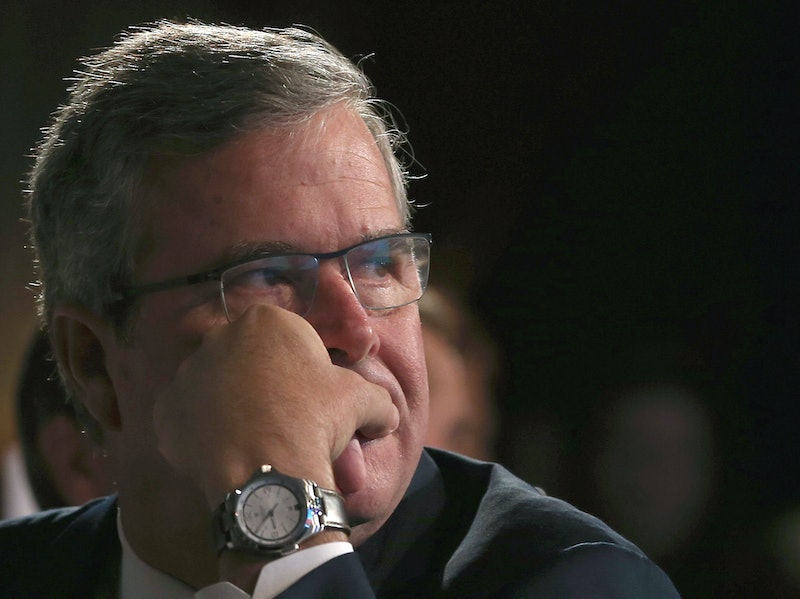 Jeb Bush is getting an early taste of what a presidential campaign is like. Over the last seven days, he's now been hit by two press stories calling his record as Florida governor into severe question. One, broken by The Boston Globe on Friday, detailed Bush's relationship with marijuana and hash while he was a student at the prep school Andover, laying bare his considerable hypocrisy while presiding over Florida's harsh anti-cannabis sentencing laws. But the other, which broke just a day earlier, hits a visceral, raw, and potentially more damaging chord — Jeb Bush put Terri Schiavo's husband through "hell," according to a profile by Politico Magazine's Michael Kruse, and reading him discuss it is heartbreaking.

It's possible you've forgotten the Terri Schiavo story, or never heard about it when it was happening, though it dominated the media landscape for a long, sad time back in the early 2000s. Basically, a political and media firestorm occurred over Florida man Michael Schiavo's desire to shut off his clinically brain-dead wife Terri's life support systems, and her parents' disagreed. Terri suffered a catastrophic health incident in 1990 that cut off oxygen to her brain, and though she was ultimately stabilized at a hospital, the length of her suffocation left her too far gone.

Over the next 15 years, her husband would become embroiled in one of the most harrowing situations amid a family crisis you could imagine — having his legal fight against Terri's parents broadcast worldwide. It was seized upon by the heavily Christian "pro-life" movement, what with its easy ideological through-line for supporters of anti-abortion politics.

But it wasn't just her devout Catholic parents who were at odds with Michael — it was also Florida Governor Jeb Bush. After meeting Terri's father in 2001, Bush took up the cause in a big way. After a court approved the removal of Terri's feeding tube in 2003, as Kruse details, Bush successfully got a bill quickly run through the Florida legislature that granted himself the power to issue a stay on the court's decision. His own lawyer doubted the bill's constitutionality, but it was nonetheless passed and signed in less than a day. Terri's feeding tube was promptly reattached, setting off well over another year of legal drama, press attention, and political scrutiny, with Bush feverishly trying to prevent Schiavo's death up to the very limits of his executive authority.

It would take until March 2005 — a full seven years after Michael's initial petition — that the court's order was finally honored, and Terri Schiavo was taken off the feeding tube to die. The results of her autopsy ultimately backed up medical analysis of her condition, finding her brain degenerated to half its expected size, with massive neuron loss. And yet, even then, Bush couldn't give up the fight, requesting that a Pinellas County prosecutor review the case again.

Michael Schiavo has clearly never forgotten, nor forgiven Bush for his aggressive tactics against the Florida judicial system and his at-any-cost attempts to get in the middle of such a somber decision. Schiavo told Kruse that he thought people needed to know how horribly Bush affected him while governor, now that he might be vying for the ultimate executive office. Schiavo said:

It was a living hell, and I blame him. ... He should be ashamed. And I think people really need to know what type of person he is. To bring as much pain as he did, to me and my family, that should be an issue. ... Knowing that he had no standing in this, he made it worse for everybody. He made life, for a lot of people — the nursing home people, the local police, lawyers — he made everybody miserable.

There's no telling which stories dating back from Bush's governorship will really catch hold in a consequential way and which won't, not yet at least — in virtually every presidential campaign, there are a dozen different lines of criticism, and only some of them end up taking hold. But if last week is any indication, it sounds like there are people all too willing to share some of the troubling sides of Jeb Bush, and that must be cause for his concern.