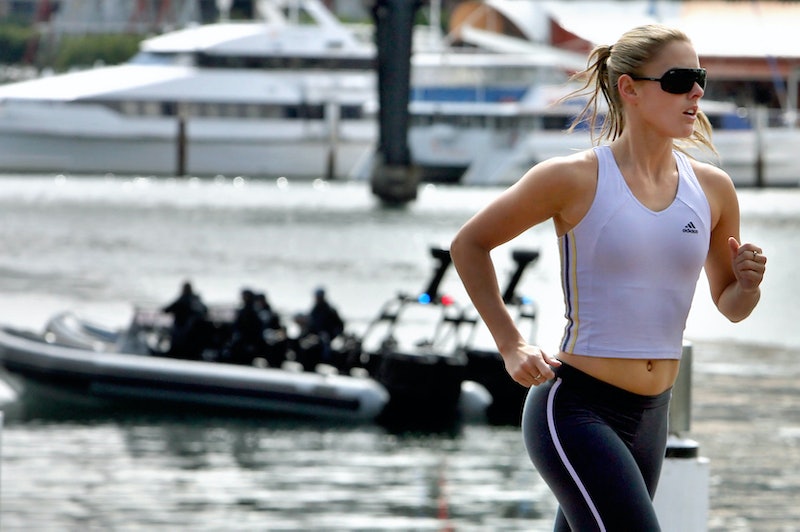 Jogging can be an exhilarating way to exercise, but results from a new study might stop you dead in your tracks: too much jogging can be just as bad as not exercising at all, when it comes to your health. In a study conducted by researchers with Denmark's Copenhagen City Heart Study, 1,098 joggers and 413 non-joggers were studied for 12 years. The researchers found was that those who jogged frequently and intensely (defined as jogging more than three times per week and above seven miles per hour) were as likely to die as those who led sedentary lifestyles. In fact, one researcher was quoted as saying that jogging strenuously for years could pose serious health risks.

However, these health risks don't apply to those who jog slow to moderately. In fact, those who jogged for a total of one to two-and-a-half hours a week had the lowest risk for death. Jogging three times a week for between 20-48 minutes is the most optimum; this is equated to a vigorous amount of exercise, unlike strenuous jogging, equivalent to very vigorous exercise. So while you want to still work up a good sweat — no one is saying you shouldn't exert yourself — you don't want to over-do it.

Although it might seem counterintuitive, more and more evidence is being presented that exercising too much is detrimental for your health. Researchers think this is because there is an upper-limit to exercise or a threshold that doesn't allow you receive the benefits of working out, once you reach it. "No exercise recommendations across the globe mention an upper limit for safe exercise, but perhaps there is one," said Jacob Louis Marott, one of the study's researchers.

If you want to continue jogging but mitigate the potential risks of practicing it strenuously, the study recommends doing so a few times a week (no more than three) at a moderate pace level. "Anything more is not just unnecessary, it may be harmful," said study author Peter Schnohr. Keeping up with a routine like this can lengthen your life and keep you healthy — which is exactly what we want out of exercise!

If you are an aspiring jogger but are currently a self-proclaimed couch potato, there is hope for you, too — Maureen Talbot of the British Heart Foundation recommends starting out by doing brisk walking. This can be a great way to work up to slow or moderate jog, since you don't need to be doing anything more rigorous anyway!