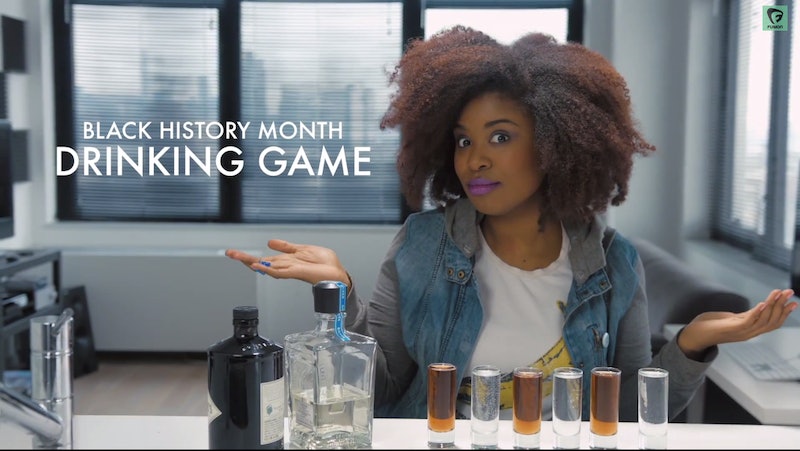 Akilah Hughes, better known as Akilah Obviously, is one of my favorite YouTubers, and for good reason. In her latest video with Fusion, she’s gifted us with the hilarious Black History Month Drinking Game. Because what would Black History Month be without the same racist comments and watered down facts that we hear every February? How better to capitalize on them than to play a month-long drinking game? Surely nothing can go wrong.

Here are some of the rules for the “Official” Black History Month Drinking Game.

“Anytime Don Lemon turns his back on his race, take a shot,” Hughes said in the video. Because Don Lemon is sure to say something ignorant and offensive about black people if he hasn’t already this month. Who can forget the “obvious” smell of marijuana he smelled in the air while he was in Ferguson? Well, maybe people will be able to get a bit of a break with this one. It seems that Don Lemon is currently distracted with confusing his smallpox vaccine with his measles vaccine.

For this, there a selection of phrases that will warrant a sip. A few key phrases include: “affirmative action,” “the race card,” “Al Sharpton,” “segregation,” and beginning a sentence with “no offense.” And if anybody wonders if Martin Luther King Jr.’s dream will ever come true, finish your drink. Hughes also added, “anytime somebody’s asked to speak on behalf of all black people, take a shot.” Here’s to that one black kid in the class who will have to explain black people and culture to their class.

There is one lifeline in this game: Beyoncé. “Anytime someone remembers that Beyoncé has been one of the most outspoken feminists for the past five years, have a glass of water.” Once again, I’m thankful for Beyoncé.

I do hope that people take the time to learn more about black history than the watered down version that’s taught in American schools. An interesting place to start might be with Mikki Kendall’s #HistoricPOC hashtag on twitter. But while you’re learning about black history, it doesn’t hurt to take note of and laugh at some of the ridiculous comments pointed out by this video. But, please, don’t actually play this game. The Don Lemon rule alone might send you to the hospital.