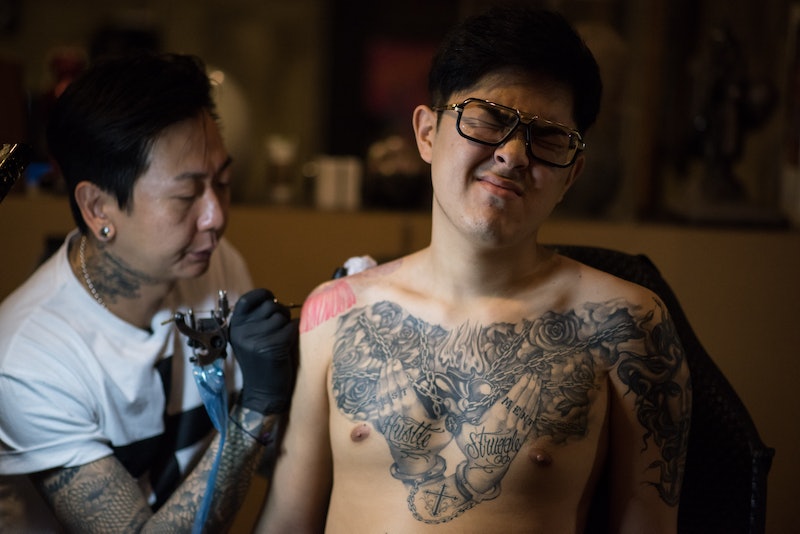 For all the glitz and glamour of Gangnam, many old-school prejudices, especially in regards to personal appearance, persist in Korean culture today. Seoul has recently emerged as a global fashion capital and mecca for chic street style, but there is one fashion trend that's still considered too edgy for Korea: Tattoos.

I got my first tattoo on the day before my nineteenth birthday because I figured if I eventually hated it, I could tell people, “I know it’s cheesy, but I got it when I was 18, and you know how dumb 18-year-olds can be.” It’s the outline of a set of brass scales, with a feather sitting in one of the bowls. The design was a loose tribute to my mother, who was born and raised in South Korea, moved to the United States when she was 15, and always pushed me to excel at all that I attempted. The tattoo was to serve as a reminder that a single stressor can change everything; that something as light as a feather can throw your life off-balance. (I know it’s cheesy, but I was 18 when I got it, so what do you expect?)

Despite the fact I have this tribute to my mom on the left side of my body, I have never told her about it. And five years later, I’m still hiding my tattoos (yes, now plural. I got a second one in August 2012) with no immediate plans to talk with her about them. My mom was strict when I was growing up, especially when it came to personal appearance. Ripped or stained clothing was not tolerated, and offending items would be immediately tossed out. I didn’t get my ears pierced until I was about 10 years old because it was too edgy. So tattoos were definitely out of the question, and, as my mom phrased it, "only for losers."

As a kid, these rule seemed entirely arbitrary, based on nothing more than the fact that my mom was being lame. But over the years, I’ve realized her feelings about tattoos aren’t based on personal preference as much as cultural bias.

It’s actually illegal to get a tattoo in Korea, except when given by a “medical professional” like a doctor or nurse, so most Korean tattoo artists have been forced to go underground, their businesses regularly threatened by police raids and heavy fines. The government position is that tattoos are a medical procedure that should only be performed in hospitals and health clinics because of the inherent risk of repeatedly sticking a mechanized needle into another person’s skin.

But the medical excuse is just a front, and the real reasons for the ban runs much deeper. Some trace the bias against tattoos back to Confucianism, the Chinese philosophy that majorly influenced Korean society and morality. Confucius’ thoughts on filial piety, or respect of one’s elders, is a cornerstone of the whole ideology. Since your body is a gift from your parents, you, as the child, should do nothing to “injure or wound them.” Taken literally, this can be applied to tattoos, although it should be noted that Confucius never used the word “tattoo.” No matter how he actually felt about them, however, doing something that your parents disapprove of is a very bad thing under this whole “filial piety” thing — a value that was lovingly beaten into me as a child.

There are more modern reasons for the negative stereotypes against those with tattoos, like the strong association between body art and "gangsters." (That’s actually the most common insult my mother would throw at those with tattoos: “They look like a gangster.”) Much like the Yakuza in Japan, the Korean mafia also cover themselves in tattoos, to intimidate and to self-identify, and so the stereotype of the tattooed thug continues.

Men with large enough tattoos are deemed unfit for military service, which is a real issue in a county that’s still technically at war with its neighbor to the north and requires all young men to serve in the military for a couple of years. Tattooed individuals are relegated to alternative service, adding further fuel to the stereotype that dudes with tattoos are losers. In this case, losers who selfishly and willingly shirk their duties to their nation and their fellow countrymen.

For a woman to have a tattoo in Korea would be simply impure, especially given these associations of mafiosos and draft-dodgers. To have a tattoo is to associate with this lower class of riff-raff, regardless of the artistic merit of the ink.

Tattoo bias also exists in the United States, and I’d be lying if I didn’t admit to occasionally having negative perceptions of people with giant tattoos poking out of their shirt collars, wondering, “What office do they work in?” even though I know having body art doesn’t disqualify a person from being intelligent or hard-working or good. There are also restrictions put upon those with tattoos in the United States that really aren’t that far from some of the Korean rules. The U.S. military has regulations about the placement and size of tattoos on soldiers, and the Red Cross has restrictions in place for potential blood donors who get tattoos in states that don’t regulate tattoo facilities (including New York and Massachusetts, the only two states in which I've lived). But the biggest difference between the American bias and the Korean one is the deeply ingrained Korean preference for purity, and these long-standing cultural pressures.

In spite of my repeated and concerted attempts (until this essay...) to hide my tattoos from my family, I should be clear that I love them. I adore the artwork, the meaning, the reminder of my mom forever on my side; that they're a permanent souvenir of who I was at that moment in time. Although it sometimes makes me sad that I don't feel comfortable sharing this with my mother, that sense of filial piety compels me to keep this secret. It's hard not to feel guilty, like I've failed her by not listening. Add in all of these cultural biases backing my mom's negative perception of tattoos, and it's no wonder I worry that coming clean will cause my mother to think less of me.

On the other hand, there are some signs that Korean fashion is starting to embrace tattoos. More K-pop stars, who are generally known for their squeaky clean, industry-endorsed images, are getting tattoos. And as K-pop goes, so does Korea — so maybe this is the push society needs. There has been some recent discussion about lifting the ban and instituting some standards, but I think it's unlikely there will be any major reforms soon. The bias against tattoos is deeply cultural in Korea, and I find it hard to imagine widespread acceptance of them if I can't even find acceptance with my own mother.