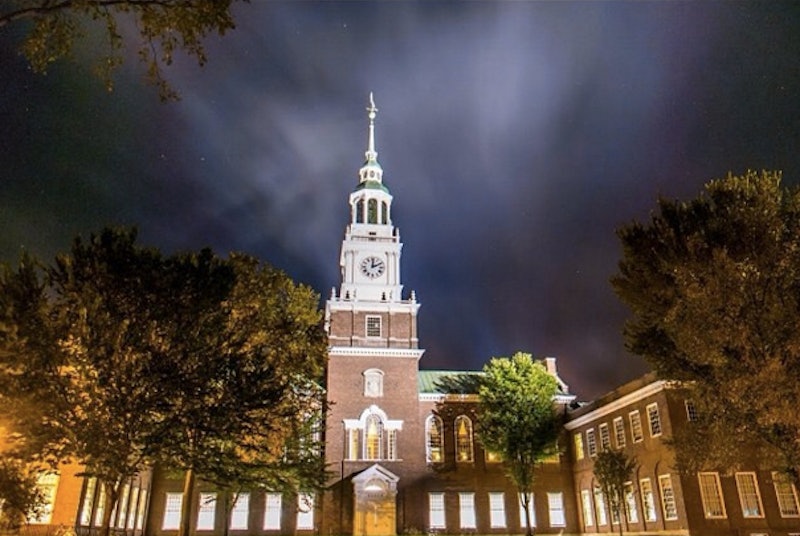 During my three years at Dartmouth, I often complained about the lack of practical education dispensed by various courses and professors. I would still argue that I had a phenomenal academic experience at the college, but be that as it may, it was sometimes painfully clear to me that a liberal arts education was not exactly synonymous with developing an applicable, workforce-ready skill set. But when it comes to the intersection of the theoretical and the real world, I can think of few better subject matters than Black Lives Matter, the namesake of a new course Dartmouth College will offer in the upcoming spring quarter.

As initially reported by the school paper, The Dartmouth, the class, offered as a collaborative effort between the geography department and African and African-American studies program, is "dedicated to considering race, structural inequality and violence in both a historical and modern context." Despite purporting an atmosphere where "differences are embraced and ideas are challenged," the college has had its fair share of questionable incidents during which cultural sensitivity seems tenuous, at best. After all, as an institution founded on the premise of "educating" Native Americans, Dartmouth's history is not one that seems particularly in-line with the message that Black Lives Matter attempts to promulgate.

But this is precisely why Dartmouth, and indeed, college campuses across the United States, needs such a course.

In the aftermath of Michael Brown and Ferguson, of Eric Garner and Staten Island, the country, for the first time in too long, took notice of the stunning inequity that still exists and is branded along racial lines in the United States. But Brown and Garner are only the most recent in a long line of historical examples of injustice, in a long, distinctly American narrative of the idea that black lives do not, in fact, matter, and that all lives are not, in fact, created equal. The failure to indict either Officer Darren Wilson or Officer Daniel Pantaleo only further reinforces the notion that African Americans and people of color in the United States are somehow not privy to the same privileges of the justice system as their white counterparts.

And it is uncomfortable to recognize this fact.

It is uncomfortable to say it out loud.

But centuries of oppression later, we are in need of a new education.

This is the goal of the course, which will be taught by about 15 different professors, representing over 10 different programs and departments at the college, including anthropology, history, women’s and gender studies, mathematics, and English. This, more so than any other course at Dartmouth (or any other college, for that matter) that I have seen, truly embodies the idea of a multidisciplinary education, drawing upon multiple disciplines for a variety of perspectives, reflecting the motivation of the class itself.

Dartmouth, a college of just over 4,000 undergraduate students nestled in the isolated town of Hanover, New Hampshire, too often manages to maintain a bubble mentality in the face of outside-world controversy, but according to some professors, this class will begin to break down the barriers between the college and the rest of America. Susanne Freidberg, the chair of the geography department, told The Dartmouth:

I hope that for the students it will provide an opportunity to learn and talk about things that might seem very far away from Dartmouth but affect a lot of people in the country, and to do so with a lot of different professors.

We hope students will be able to understand that Ferguson is not just an event in 2014, but something that’s tethered in time to a long history and still-emerging ideas about race in the US and how policing works in an age of social media and distributed surveillance.

History professor Annelise Orleck noted that she would attempt to "create a sense of historical context and perspective on issues of urban inequality and policing, as well as the community response to these issues." David Cordero, a junior at the college, told Bustle that the potential for the class to engage diverse voices from multiple audiences could serve as a key component to its success, and at the very least, its interest. Cordero says:

I feel that far too often, at least in many classes I’ve taken at Dartmouth, we’re focused on what happened 10 to 15, even 120 years ago (like in literature, history, art, and history) and yet we advocate that a liberal arts education is supposed to make us more engaged and active citizens.

Already, the Black Lives Matter movement seems to have lost some of the momentum it developed in the immediate aftermath of the Brown and Garner cases. But it is the responsibility of academics and students today to remain vigilant and prevent such tragedies from reoccurring. And if a Black Lives Matter course can serve as a tool for remembrance, then that, in and of itself, is worthwhile.