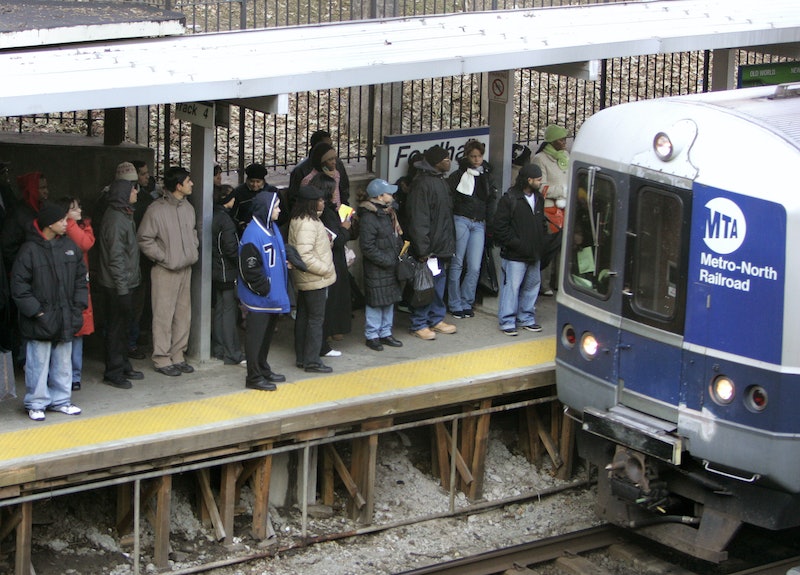 After a train-car struck a crossing vehicle, at least seven people were killed in a Metro-North Railroad train crash on Tuesday night. At least 12 others were taken to nearby hospitals for treatment, and 10 more were badly injured. Metropolitan Transportation Authority official Aaron Donovan confirmed that the woman who was driving a black Jeep Cherokee was killed instantly after the collision at Commerce Street in Valhalla, New York, in Westchester County around 6:30 p.m. Several train passengers were also killed when the front end of the train caught fire.

Aerial footage showed the SUV crushed beneath the train, which had reportedly pushed the vehicle a full 10 train car lengths, according to a report by the Associated Press. There were more than 750 passengers aboard the Harlem Line train when it crashed. Passenger Justin Kaback, commuting home to Danbury, Connecticut, told ABC News:

I was trapped. You know there was people in front of me and behind me and I was trapped in the middle of a car and it was getting very hot. All the air was turned off so there was no circulation so it was definitely scary especially when people are walking by on the outside and they said, the train's on fire, there's a fire.

Passenger Neil Rader, of Katonah, New York, told NBC News that there were about 50 ambulances on the scene as he and fellow commuters were corralled to nearby playground structures for shelter while they awaited buses that would move them to an offsite location in Pleasantville. "I've never seen anything quite like it," said Rader, who was seated towards the back of the train. He told NBC News that he usually sat closer to the front, but was running late on Tuesday night. "I'm very fortunate," he said.

Metro officials reported that the driver of the vehicle had exited her car after the railroad gates had come down on top of the SUV. She re-entered the vehicle to drive forward and got stuck. Donovan said the train left Grand Central around 5:45 p.m. and was running express. As smoke began to spread, attending firefighters quickly evacuated passengers through the rear end of the train, and they were assembled at a nearby site. Initial reports of two damaged vehicles were incorrect, reported officials.

Metro service on the Harlem line was suspended between North White Plains and Pleasantville as a result. At the time of the report, Metro service on all other lines had not been affected.

The nation's second busiest railroad, the Metro-North line usually services around 280,000 riders a day in New York and Connecticut.