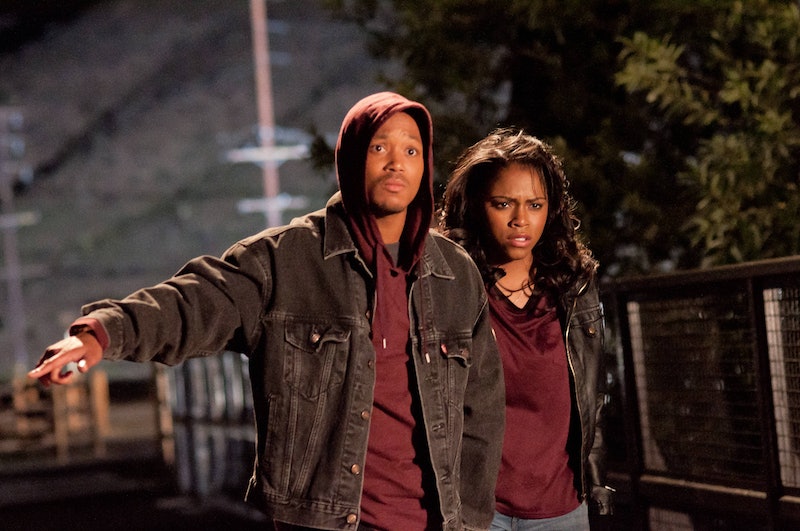 While I love literature, I have to admit I had a reputation for falling asleep during AP English class in high school. It got so bad that my teacher changed my seat to be right in front of her desk — but the joke was on her, because I actually snoozed more sitting in front of her than anywhere else. But there was one work of fiction I found too awesome to sleep through: William Shakespeare's Hamlet. Now, my favorite TV network Lifetime has made a modern TV movie adaptation of the play, as Megachurch Murder is based on Hamlet. Premiering Saturday night, the TV movie is pretty damn close to the classic play — but with some cool changes.

Megachurch Murder follows Hannah (played by Beyonce's cousin Shanica Knowles), the daughter of a late megachurch pastor who died in a cycling accident... or did he? The more she looks into it, the more it seems like it might have been a murder most foul committed by her mother Martha (Tamala Jones) and Clay King (Michael Beach). Hamlet, if you need a refresher, follows about the titular son of the murdered King of Denmark as he avenges his father's murder. But whodunnit? Hamlet suspects it's his Uncle Claudius.

Sounds pretty close, right? Well, check out more similarities and differences between the two tales, but no spoilers for the movie (I promise!).

First things first: Yeah, the Hamlet character is a female! And that's pretty damn cool. Before her father is found dead, Hannah Spears was a golden child. But soon after his death, she falls apart and right into several bottles of booze. Much like how Hamlet is labeled as crazy in the play, Hannah is mostly labeled a drunk and rebellious teenager by her friends and family.

Just like Hamlet, Hannah also freaks out when she finds out that her mother Martha is already getting down and dirty with Clay. But hey, at least Clay isn't her uncle, like Claudius is in the play, because that would be super awkward.

Ophelia is one of many tragic characters in the play and she famously drowns herself before play's end, while depressed about her father Polonius' death. Her dad conspires with Claudius to spy on Hamlet, whom she's hoping to marry.

In Megachurch Murder, Oliver is a lot more stable in the role. While Hannah's a bit of a drunkard, Oliver looks out for her, because he likes her. She likes him, too. But guess what? This time around, Oliver is Clay's son. Awk-ward. Will that stop these lovebirds from getting together and finding out the truth behind the murder? Will Oliver drown? All very valid questions that'll be answered in the movie.

In Hamlet, the dead King of Denmark appears to the title character as a ghost, because that was totally acceptable in the Shakespearean days. As a specter, King Hamlet tells Little Hamlet that Claudius poured "juice of cursed hebenon" into his ear and it killed him. Gross, but true.

Ghosts aren't as big on Lifetime, so instead, Hamilton Spears posthumously tells daughter Hannah about his Clay and Martha concerns via a USB flash drive Hannah always used to upload his sermons to their website. Clever, isn't it?

There are plenty more parallels between Hamlet and Megachurch Murder, but you'll have to tune in to Lifetime on Saturday at 8 p.m. to see the rest.

More like this
At 14, Jenny Han Wrote Rom-Coms About Her Friends & Fan Mail To Leo DiCaprio
By Alyssa Lapid
'The Summer I Turned Pretty' Book Ending Is An Emotional Rollercoaster
By K.W. Colyard
The Future Of 'All Creatures Great & Small' Is Confirmed & Wedding Bells Are Ringing
By Rebecca Fearn and Frances Stewart
The 'Spiderhead' Movie Ending Is Nothing Like The Short Story It’s Based On
By Morgan Leigh Davies
Get Even More From Bustle — Sign Up For The Newsletter