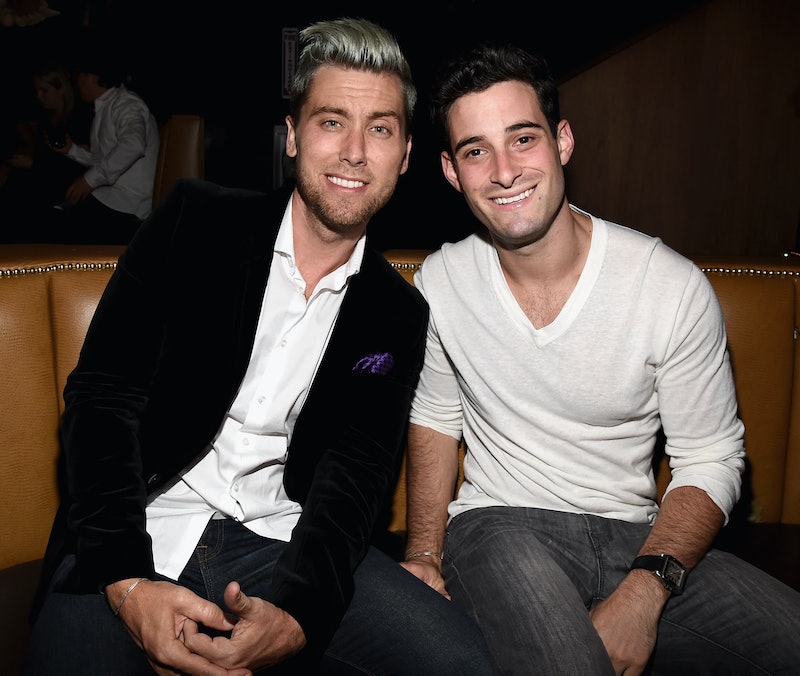 Lance Bass was my favorite member of *NSYNC, so naturally, when I saw that Bass was marrying his boyfriend, I had a million questions. Where would the ceremony be? Would I get an invite (OK, fine, kidding)? And lastly, which celeb guests would attend Bass' wedding?

I always liked the boy band members who flew the furthest under the radar (speaking of which: if anyone would like to borrow my Kevin from The Backstreet Boys poster, just let me know). This could represent some sort of deep-seated commitment issue in me, but I prefer to think it was just because Bass was cute and shy and blonde, a type that draws me in to this day — I believe that would make me a "Niall fan" in today's 1D climate. So, it's been nice that, even though Bass was formerly the *NSYNC member we knew least about, his life has remained in the public eye just enough to follow what's going on with him.

For the uninitiated, a little background: Bass first came out to People in 2006, and on Dec. 10, 2014 he married fiance Michael Turchin in L.A. And if you're like me you'll be tuning into Lance Loves Michael: The Lance Bass Wedding Feb. 5 on E! out of pure out of lingering childhood fondness and, also likely, the possibility of a Joey Fatone sighting. Not only is Bass and Turchin's the first ever televised gay wedding, but it guarantees to feature all sorts of famous people he's met along the way. This event was star-studded as hell — even the officiants have IMDb pages.

Bass and Turchin were officially joined in holy matrimony by friends and actresses, JoAnna Garcia Swisher and Jamie-Lynn Sigler. Bass told Us Weekly, "We loved the idea of using someone who knows us." And they filled up their wedding party with even more loved ones, swapping out bridesmaids and groomsmen for their three dogs and a crew of model "flower girls" including, Allie Rizzo, Julie Henderson, and Anne Kortright.

Of course, what everyone is really always dying to know is how close Bass and his former *NSYNC bandmates still are. And the answer seems to be "pretty close!" Joey Fatone and Chris Kirkpatrick were both in attendance, and JC Chasez even sang during the first dance.

No reunion, though: Justin Timberlake was on tour and therefore unable to make it. When Bass found out the wedding date was in conflict with Timberlake's tour, he told People, "It is sad, but he'll be there in spirit." And as a special boy band bonus, AJ McLean from The Backstreet Boys was also there to show his support!

Bass and Turchin were married in front of nearly 300 friends and family members, and it seems that about half of them are names you'd know. The star-studded wedding included Christina Applegate, Kris Jenner, Pauley Perrette, Cheryl Burke, Robin Antin, Darren Criss, and Emanuelle Chriqui; for a really good time, I'd recommend hunting around on Bass' Instagram for hilarious pairings of his famous friends posing in the wedding's Vogue photo booth. For example, close friends, Gabourey Sidibe and Lisa Vanderpump:

Or Carmen Electra and Fortune Feimster:

Tune into Lance Loves Michael: The Lance Bass Wedding Feb. 5 on E! to catch all the famous faces, and more importantly, all that love.

More like this
Alicia Silverstone Has Recreated An Iconic 'Clueless' Scene
By Frances Stewart
Selena Gomez Is Fine Being Single, But She Still Manifested Romance On 'SNL'
By Martha Sorren, Jake Viswanath and Jack Irvin
Martin Hancock’s Wife Played A Key Part In His Return To 'Coronation Street'
By Catharina Cheung
Why Sara Pascoe's Husband Is Familiar To Comedy Fans
By Alice Broster
Get Even More From Bustle — Sign Up For The Newsletter